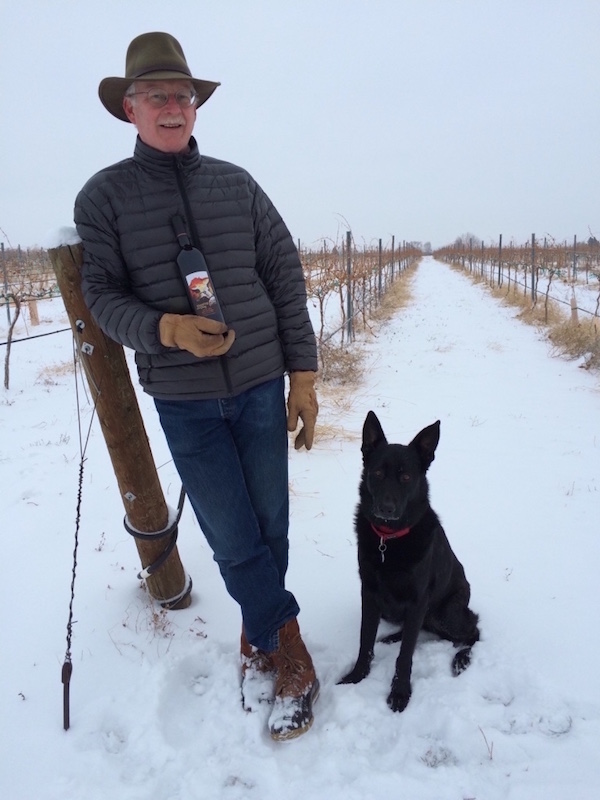 Larry Oates, winemaker/owner of Sleeping Dog Wines in Benton City, Wash., poses in Buoy Vineyard with Jett and a bottle of the Sleeping Dog 2008 Tail Wagger, a blend of Syrah and Cabernet Sauvignon that won best of class and Best of Columbia Valley at the 2015 Grand Harvest Awards wine competition in Santa Rosa, Calif. (Photo courtesy of Sleeping Dog Wines)

“I don’t enter many competitions, but every now and then it is nice to get a pat on the back,” Oates said. “Who doesn’t like getting validation?”

Best white wine of the competition was won by EdenVale Winery in Medford, Ore., for the 2014 Stoneriver Midsummer’s Cuvee, a blend of Chardonnay, Pinot Gris and Viognier from the Rogue Valley.

Blakeslee Vineyard Estate in Sherwood, Ore., also stood out with two double gold medals and two gold medals. Its 2014 Rosé of Pinot Noir not only was selected as best of class but also deemed as Best of Willamette Valley. Firesteed Winery in Rickreall, Ore., received gold medals for its 2009 Pinot Noir and 2014 Pinot Gris.

Conviction Wines in British Columbia’s Okanagan Valley, a new brand for Andrew Peller Ltd., received gold medals with its 2014 The Financier Pinot Grigio and 2014 The Industrialist Sovereign Opal. The latter is an aromatic grape that’s a fan-favorite throughout the province and long been linked to Andrew Peller’s historic Calona Vineyards brand. 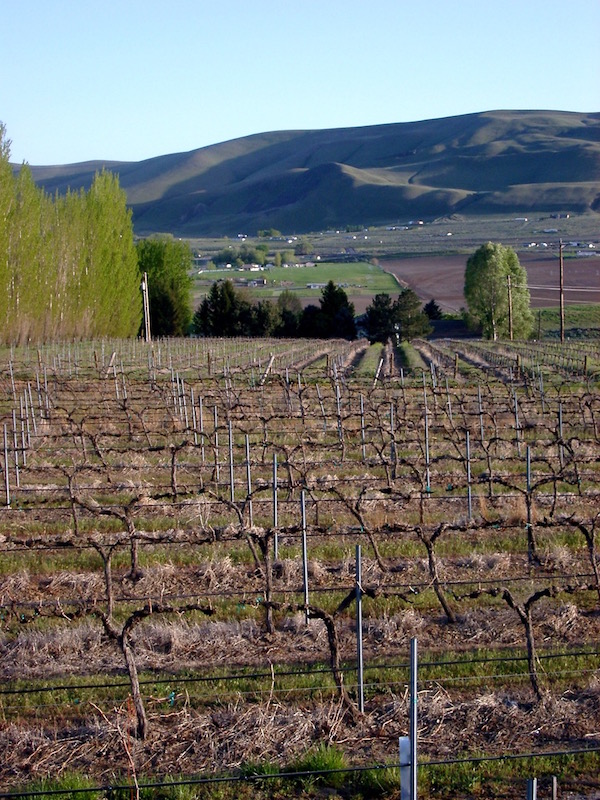 The Grand Harvest Awards, an international judging founded in 1990 by Bill Moffett of Vineyard and Winery Management magazine, was staged Nov. 17-18 in Santa Rosa, Calif. It now is one of six competitions owned by Moffett’s son, Robert Merletti, publisher of Vineyard and Winery Management, which celebrated its 40th anniversary this year and boasts the largest circulation of any North American wine trade publication.

Moffett rapidly built a following for the competition because of its groundbreaking approach. As often as possible, the GHA groups entries within their region, allowing the national panel of judges to get a sense of the role that terroir plays. It makes for an interesting and unique experience among the judging panels, and Moffett devoted years of research and produced a series of articles based on judges’ feedback and his own findings.

Oates, who launched Sleeping Dog Wines in 2002 and branded it as a tribute to his rescue dog Aurora, said he appreciates the special evaluation his wines traditionally have received at the Grand Harvest Awards.

“It’s an interesting spin on how things are evaluated,” Oates said. “I take it all with a grain of salt, but it’s nice to get that sort of accolade.”

Sleeping Dog also earned a gold medal for its 2007 Syrah ($24). His best of class Tail Wagger is a blend of Syrah (45 percent) from Buoy Vineyard and Cabernet Sauvignon (55 percent) from Rivers Bend Vineyard, an estate vineyard for Lake Chelan Winery and sister planting of Buoy. Oates produced 80 cases of what’s been his flagship wine.

“I looked at the list with all this year’s winners and it includes the Yakima Valley, Red Mountain and Lake Chelan, so it’s the over-arching Columbia Valley,” Oates said. “And I noticed that with one exception (the Firesteed 2009 Pinot Noir from Oregon) — the rest were 2011s, 2012s, 2013s and 2014s, so as I put it to my wine club, ‘Let’s hear it for the old dogs!’ ”

Despite this week’s news, Oates said he’d long ago moved his attention to small lots of Malbec, Montepulciano and Petite Sirah, varieties Bob Buoy planted for him nine years ago.

“I’m not making Syrah anymore and not making Cab anymore,” Oates said. “I miss it, but a lot of people are doing a nice job with those grapes. Not many are making Montepulciano or Petite Sirah, though.”

Annual production at Sleeping Dog tops out at 500 cases. Much of his fruit comes from Buoy, whose plantings are across the gravel driveway from Oates’ home and winery, which overlook the Yakima River.

Sadly, Oates no longer is accompanied in the vineyard by Aurora, who died in 2013. However, there’s Jett, adopted through a German shepherd rescue organization. Larry and his wife, Joyce, continue to work on rehabilitating Jett to erase “the memories of her prior life.” 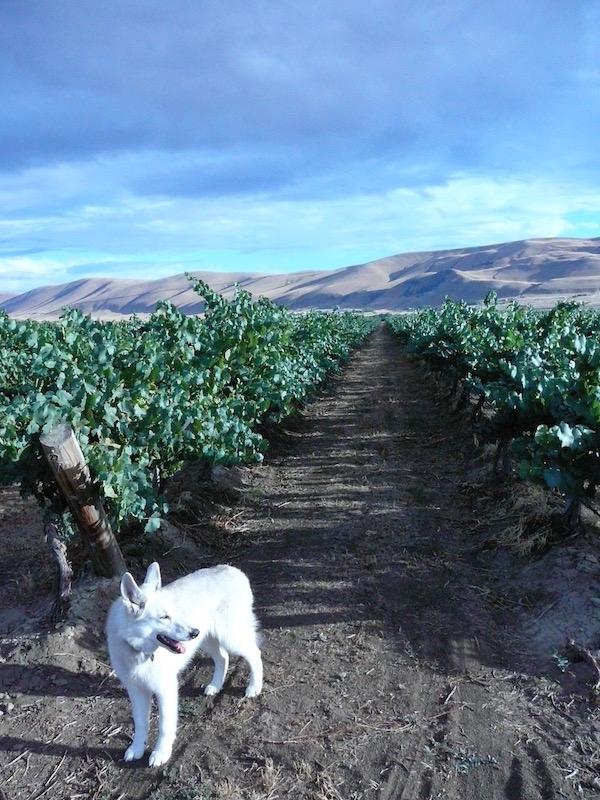 And the Oateses continue their tradition of supporting canines through Sleeping Dog Wines. For the past six years, they donated the red wine for the annual fundraising dinner for the Tri-City chapter of Pet Over Population Prevention. Sleeping Dog also assists the Humane Society, Mikey’s Chance, a rescue program in West Richland, and Prison Pet Partnership in Gig Harbor.

“If it’s dog-based, I will try to do something for them,” Oates said. “If it’s in some place like Ohio where I don’t ship to, then I can’t do it.”

Oates recently transitioned into a full-time role at his winery after a career as an environmental consultant. That’s allowed him to spend more time representing his brand in the Seattle, where there is the Sleeping Dog Wines Room at Hotel Vintage-Seattle. He also poured his Montepulciano and Petite Sirah at David LeClaire’s Exotic Wines Festival.

While sales and tasting room traffic were up 30 percent in what he called his “bell ringer year” of 2014, this past season business and touring was off. The popular Purple Star/Native Sun moved into his neighborhood, which will help in terms of “the cluster concept,” so Oates wonders if the historically hot summer in the Puget Sound played a role.

“It was 85 to 90 degrees all summer long with clear blue skies and 200 tasting rooms over there, so why the heck come around to the other side of the mountains and get cooked?” Oates wondered. “And by the way, you might get smoked out by the forest fires burning, as well.”

His tasting room in Benton City is open by appointment only during the winter, but a selection of his wines is available at Ariel Gourmet and Gifts in downtown Richland, Bonnie’s Vine & Gift in Prosser, the Pacific Northwest Shop in Tacoma and at Leschi Market in Seattle.

“I’m open spring through November, and then I get notice about the awards on Dec. 1,” Oates chuckled.