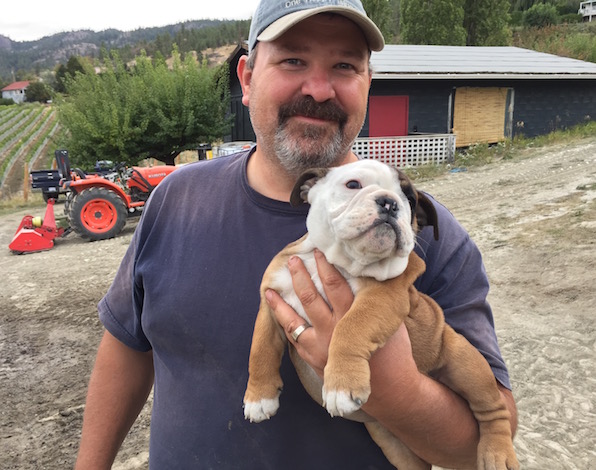 Jay Drysdale, owner/winemaker of Bella Sparkling Wines in Naramata, British Columbia, named his winery for his sweet-natured English bulldog. Bella died a few years ago, but Drysdale recently brought on baby Buddha, and she appears to be just as charming. (Photo by Eric Degerman/Great Northwest Wine)

NARAMATA, British Columbia – Jay Drysdale could be seen as a bit of a renaissance man, working through the years as a chef, sommelier, wine merchant, winery general manager and wine judge.

Instead, he’s known as the bubble man of British Columbia. Drysdale is the owner and winemaker for Bella Sparkling Wines in the Okanagan Valley, the only winery in the province that focuses exclusively on sparkling wines.

“Bubbles have always been that go-to comfort wine,” Drysdale told Great Northwest Wine. “It suits any occasion. As I had the opportunity to taste older and better Champagnes, that’s when I really got interested in sparkling.”

We recently caught up with Drysdale via Skype and interviewed him for this week’s Great Northwest Winecast and also to focus on British Columbia sparkling wines for this week’s five-part series.

From restaurants to Bella Wines 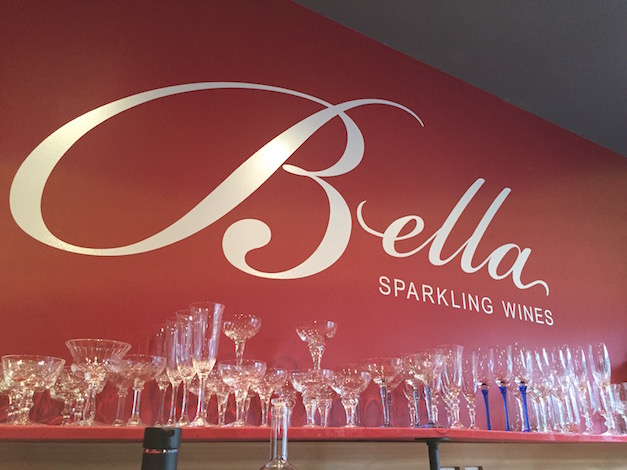 Bella Sparkling Wines in Naramata, British Columbia, allows visitors to the tasting room the option of which antique flute they would like to sample from. (Photo by Eric Degerman/Great Northwest Wine)

After studying botany while attending college in nearby Alberta, Drysdale found his true calling with food and wine. He moved to the Okanagan Valley city of Oliver and began running a restaurant called Toasted Oak.

“It was a good small-town local eatery,” he said. “we wanted to emphasize ‘local.’ I remember the revolt I had when I took chicken fingers off the menu.”

Over the course of a couple of years, Toasted Oak developed into a restaurant of such quality in food and wine, it rivaled the top eateries in Kelowna and even Vancouver. Drysdale built the wine list into more than 400 choices.

From there, he went to work for the B.C. Wine Institute, where his job was to connect wineries with the Vintners Quality Alliance wine shops throughout the province. Today, with more than 300 wineries now operating in British Columbia, that job is considerably easier.

“Now, there’s so many products, the stores have to be selective,” he said.

He went on to become the de facto general manager of Enotecca, a wine company in the southern Okanagan Valley with high-end brands LaStella and Le Vieux Pin. It was an experience that set him on course to becoming a winemaker.

“That’s when I got hooked on winemaking by working on the crush pad there,” he said.

Drysdale decided to head south to learn winemaking, enrolling in Washington State University’s viticulture and enology program for two years. Of the many lessons he learned, one was not to tell the folks at the border what exactly you’re doing.

“You don’t tell them at the border that you’re going down for school because you’re supposed to have a student visa,” he said ruefully. “I learned that the hard way once. Every time after that, I was just going ‘wine tasting.’ ”

During this time, he met his future wife, Wendy Rose, as part of a trip to Oregon to learn more about truffles. She grew up in California and ended up being a catalyst in their decision to focus on sparkling wine. Her family in the Bay Area would import Champagne from a small producer each year.

“For almost three decades, that was their house wine, a single chateau in Champagne that they imported every year,” Drysdale said. “So when we were discussing future plans and I said to her that one day one of my dreams is to have my own sparkling wine house, it was a no-brainer for Wendy. It was done before I even finished the sentence.” 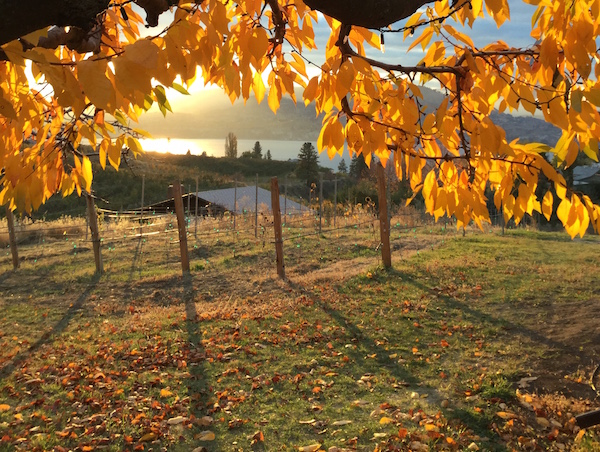 While his love for bubbles drove Drysdale’s passion, distinguishing himself within the growing British Columbia wine industry also was a big factor.

“For me, the future is doing one thing and doing it the best you can,” Drysdale said. “I think that’s how you’re going to get traction. My way of competing and marketing within our industry here was to just do sparkling wine, do it traditionally and keep it super focused. When people heard the word ‘Bella,’ they just knew it was sparkling wine. And it eliminated a lot of that competition with all the other wineries.”

Drysdale focuses on two grape varieties: Chardonnay and Gamay. He makes a traditional Blanc de Blancs with Chardonnay, but he goes a little crazy with Gamay.

“It’s sort of the little brother to Pinot Noir,” he explained. “It’s a grape that I’ve had a lot of interest and passion with over the years. It’s a grape that excels in this region, and it’s the one I’m having the most fun with because it shows off vineyard expression better than Chardonnay.”

Drysdale keeps all his wines from the vineyards he works with separate, which sometimes can mean seven to nine different wines, depending on the vintage.

“In some vintages, we’ll have seven different labels that are all vineyard designate,” he said.

“The focus is to show off the vineyard expressions.”

While most of Drysdale’s sparkling wines are made in the traditional Methode Champenoise, he began experimenting with the rare Methode Ancestrale in 2014. With the traditional method, the wine is fermented once in a vat or barrel, then bottled. A second fermentation takes place there, capturing the carbon dioxide and, thus, the wine’s famous bubbles.

“A lot of times, you get a bit of residual sweetness left in it, but it’s a neat process,” he said. “It’s an exciting wine. The purity of fruit is just amazing.”

In 2014, he managed to get one barrel’s worth of wine – about 25 cases – to go through Methode Ancestrale. In 2015, he expanded that to eight barrels. Though only four of those barrels worked to Drysdale’s satisfaction, as some of the wine pushed through fermentation so quickly, he wasn’t able to get them all bottled in time.

Drysdale has expanded production to about 1,400 cases. His wines are available at private wine shops throughout the province, particularly in the Lower Mainland. His tasting room on the Naramata Bench north of Penticton is open from May to September or by appointment.

“It’s at the very end of the bench,” he said. “You’ll see the signs once you pass the other 30 wineries coming up Naramata. If we’re around, we’re more than happy to taste bubbles with you.” 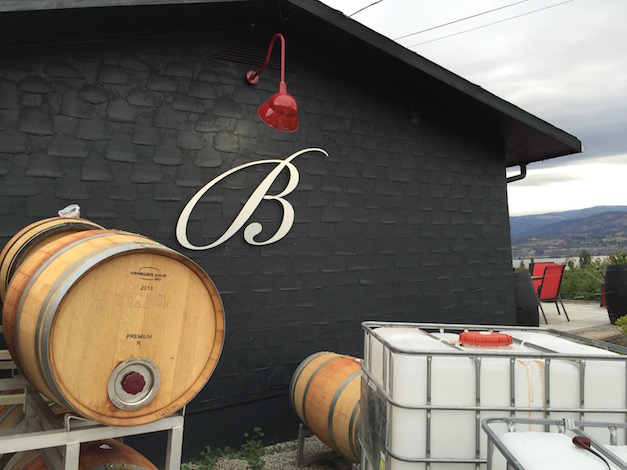 While Bella leads the way with a focus on British Columbia sparkling wine, there are several producers in the province. Here’s a rundown of many of them.

Bella Wines: Jay Drysdale and Wendy Rose own this sparkling-only producer on the Naramata Bench, about 15 minutes from downtown Penticton. They work exclusively with Chardonnay and Gamay grapes.

Sumac Ridge Estate Winery: This winery in Summerland (northwest of Penticton) is one of the largest sparkling wine producers in Canada. Its most famous bubbly is called Steller’s Jay Brut (named after the official bird of British Columbia).

Gray Monk Estate Winery: This longtime winery north of Kelowna flies a bit under the radar with its bubblies, but it does produce three sparkling wines: a brut rosé; a blend of Riesling and Pinot Blanc; and a blend of Chardonnay, Pinot Noir and Pinot Meunier.

Blue Mountain Vineyard and Cellar: Blue Mountain near Okanagan Falls is rarely open to the public, so it’s not as well known as other producers. But it nears cult status for its wines, particularly its four sparkling wines. They’re well worth seeking out.

Summerhill Pyramid Winery: This winery just south of Kelowna produces no fewer than nine sparkling wines, many of which are made organically and aged in the estate pyramid.

8th Generation Vineyard: Located in Summerland just north of Penticton on Highway 97, this high-end winery produces a couple of frizzante-style sparkling wines that are simply delicious.

Blasted Church Vineyards: Based in Okanagan Falls, this winery is named after a church that was dynamited off its foundation so it could be moved. It produces a sparkling wine called “OMG” that is made from Pinot Noir and Chardonnay.

Township 7 Vineyards & Winery: Township 7 started in Langley and has since expanded to having production and a tasting room on the Naramata Bench. It produces a sparkling wine called Seven Stars that uses grapes from both the Okanagan and Fraser valleys.

Jackson-Triggs Okanagan Estate: One of Canada’s largest wineries is just north of Oliver in the Okanagan Valley, and it produces a sparkling Chardonnay. This summer, it earned best of show at the B.C. Wine Awards for its 2010 Entourage, a bone-dry brut style. Several years ago, it also produced a rare sparkling Riesling ice wine.