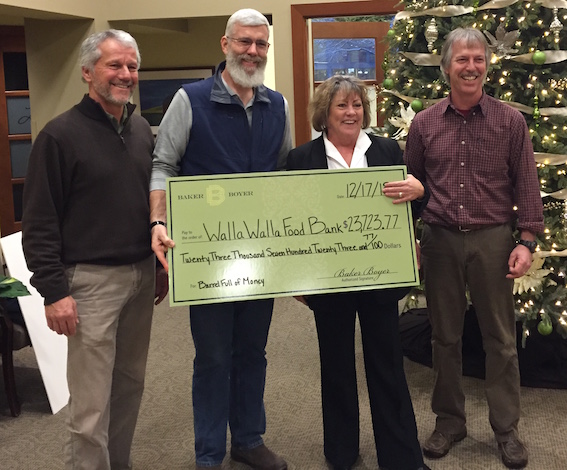 WALLA WALLA, Wash. – A year ago, Walla Walla Valley wineries and businesses came up short of the $20,000 target for their annual Barrel Full of Money food bank campaign.

This holiday season, community leaders and more than 60 wineries combined to crush their goal as they presented a check of $23,723.77 on Thursday to the Blue Mountain Action Council Food Bank. It was a record amount for the five-year campaign, which has raised a total of nearly $66,000 since the creation of the Barrel Full of Money in 2011.

“I’m so proud of our community for pulling together to help those in need,” Duane Wollmuth, executive director of the Walla Walla Valley Wine Alliance, stated in a news release. “We set the bar for the fundraiser pretty high this year – and we look forward to supporting the food bank through the Barrel Full of Money for years to come.”

“The amount of money that was raised this year is almost unbelievable,” said Jeff Mathias, BMAC Food Bank director. “It’s going to buy a whole lot of food for local people in need.” 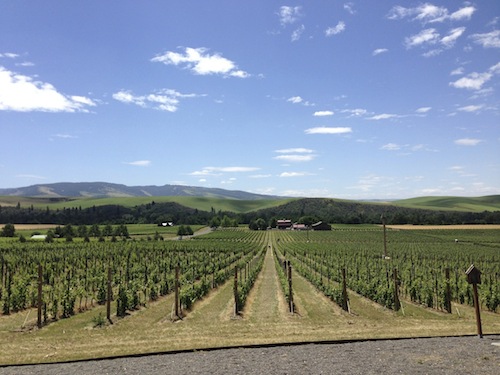 More than 60 member wineries of the Walla Walla Valley Wine Alliance participated in the 2015 Barrel Full of Money fundraiser for the region’s food bank. (Photo by Andy Perdue/Great Northwest Wine)

The check presented by the steering committee will be used by the BMAC to purchase food. The previous record of $15,000 was set in 2013.

The Barrel Full of Money campaign begin in late October as donation canisters were made available at wineries and other businesses throughout the Walla Walla Valley. Wine barrels – used as donation container – also were featured at Olive Marketplace & Café and the Gesa Power House Theatre. Olive also donated a portion of all sales of its seasonal pumpkin cheesecake.

Alaska Airlines donated two unrestricted roundtrip airline tickets as the grand prize in a raffle drawing. Second prize in the raffle was a one-night stay at the Marcus Whitman Hotel and dinner for two at The Marc Restaurant. Raffle tickets were $10 each, and the winning tickets were drawn during the check presentation.

“The Barrel Full of Money fundraiser has become crucially important to the food bank,” Mathias said. “We’re so grateful for our local wineries and businesses, who truly care about making a difference in the community.”

The Blue Mountain Action Council is a community action partnership agency that provides services to help people meet their basic needs. The BMAC food bank is the regional distribution center for five food pantries in Walla Walla County as well as pantries in, Asotin, Columbia, Franklin and Garfield counties.