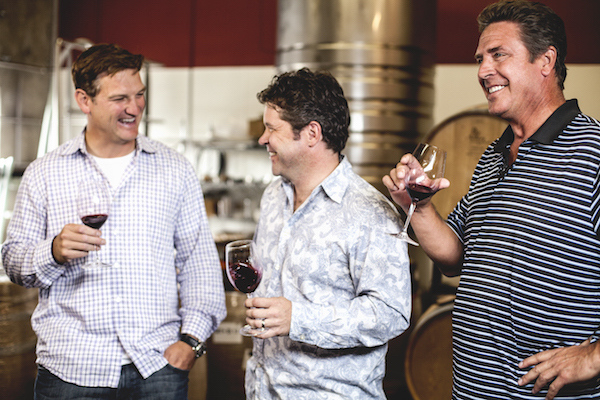 WOODINVILLE, Wash. – When retired NFL quarterbacks Dan Marino and Damon Huard decided to get into the wine business, they were serious about creating a great wine and not just putting together a vanity winery to take advantage of their fame.

Their first release, the Passing Time 2012 Cabernet Sauvignon, was a huge hit, selling out quickly and taking its place amid some of the finest efforts from one of Washington’s best vintages in history.

“This can’t come across as a vanity project,” Huard told Great Northwest Wine. “Having star power certainly helps with that first vintage, but we’re not just a couple of former athletes trying to make a buck.” 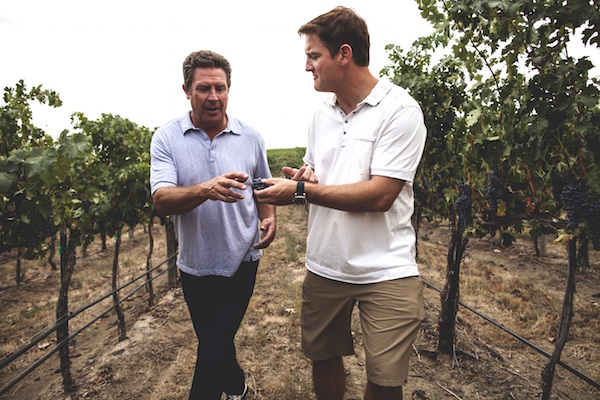 Dan Marino, left, and Damon Huard taste grapes as they walk through a vineyard in the Horse Heaven Hills. (Photo courtesy of Passing Time)

Huard was born in Yakima and was a star quarterback at the University of Washington before forging an NFL career. He played for the Kansas City Chiefs, the New England Patriots (where he won two Super Bowl rings) and the Miami Dolphins.

In Miami, Huard backed up future Hall of Fame quarterback Marino, and the two became friends. Even though Huard was born in Washington wine country, he was a rum-and-Coke guy, and it wasn’t until he got to know Marino that he learned about Washington’s burgeoning wine industry.

Marino knew all about the likes of Quilceda Creek, Andrew Will, Leonetti, Woodward Canyon and L’Ecole No. 41, and he introduced Huard to them all.

“It took me moving 3,000 miles away from home to appreciate Washington wine,” Huard said with a laugh.

The two talked about getting into the wine business once their playing days were over, and those discussions became reality a half-decade ago when they became serious.

One of their first moves was finding a first-rate winemaker. But they weren’t necessarily interested in working with a big name.

“We wanted a young guy who was hungry,” Huard said. “In football, we have a saying about ‘wanting guys with a Ph.D: poor, hungry and driven.’ ”

Through a series of acquaintances, they met Chris Peterson and Marty Taucher, who were just launching Avennia in Woodinville. Marino and Huard were familiar with Peterson’s work when he was assistant winemaker for acclaimed DeLille Cellars in Woodinville and wanted to hire him as Passing Time’s winemaker. 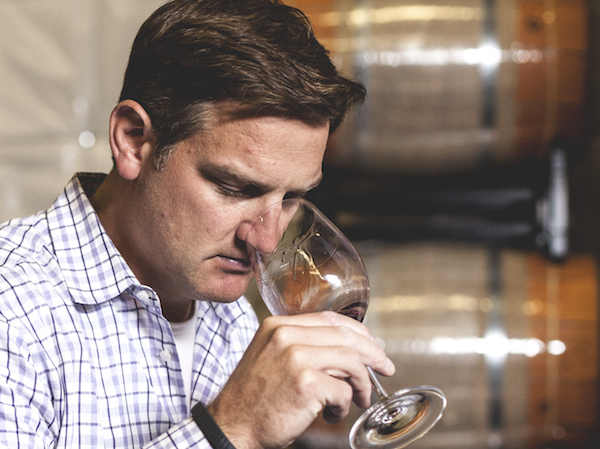 Peterson, who grew up watching Marino playing on Sundays, was happy with the opportunity to work with the retired NFL players, especially because they were serious about producing a great wine.

“They’re committed to quality,” Peterson said. “They didn’t mind selling off what didn’t work. They’re in it to make great wine, not just have a winery.”

Greatness starts in the vineyard, and Huard was friends with grape grower Paul Champoux of Champoux Vineyards and owner/winemaker Chris Camarda of Andrew Will. Passing Time was in line to acquire some old vine Cabernet Sauvignon from Champoux, but a freeze in 2010 devastated the block of vines he was going to get. Those vines ultimately were replanted in 2012.

So Huard, Marino and Peterson began working with Discovery, a vineyard owned and managed by Milo and Kay May in the Horse Heaven Hills near Champoux. The first release of Passing Time is primarily Cabernet Sauvignon from Discovery, along with a bit of fruit from Champoux Vineyards, as well as Klipsun Vineyards on Red Mountain.

Their goal was to make about 1,000 cases, but after sorting out which barrels worked with what they were trying to achieve, the inaugural release ended up at 450 cases.

“Our goal is to try to make one of Washington’s next great Cabernets,” Huard said. “If that means less production, that’s what we’re going to do. We went with what was up to our standards.”

It also meant that the wine moved quickly, even at $75 per bottle. The wine was released in April, though it also was pre-sold to a mailing list. The last bottle left the winery in August, primarily direct to customers, but it also landed in prominent wine shops such as McCarthy & Schiering and Esquin Wine & Spirits, both in Seattle, as well as several top restaurants.

Great Northwest Wine tasted the Passing Time 2012 Cabernet Sauvignon in May under blind conditions and was entranced: “The hallmark is elegance and supreme balance from the midpalate on back thanks to beautifully managed tannins.”

It earned our top “Outstanding!” rating as a result.

The Passing Time 2013 Cabernet Sauvignon will be released this coming April, and it will be at a similar production level – about 450 cases. Huard and Marino have leased an event space next to Avennia in Woodinville and will use it for release parties and other special occasions. Marino, who still lives in South Florida, comes to Washington for wine-related events a few times each year.

With the 2014 vintage (scheduled to be released in 2017), the trio will ramp up their program a bit, with an anticipated three wines totaling about 1,500 cases. Huard is excited to expand the offerings to three examples of Cabernet Sauvignon, one each from the Horse Heaven Hills, Red Mountain and Walla Walla Valley.

The Horse Heaven Hills Cab will use the same vineyard sources as the ’12 and ’13. Red Mountain will feature grapes from Klipsun and Quintessence vineyards. And the Walla Walla Cab will include grapes from such vineyards as Pepper Bridge, Seven Hills and Leonetti Estate.

“Damon has a good idea of what they’re looking for,” Peterson said.

For Peterson, making Passing Time does not conflict with what he’s doing at Avennia, which focuses primarily wines inspired by the Rhône Valley and Bordeaux. In fact, he enjoys working with Bordeaux varieties that he made during his days with DeLille Cellars.

And his association with Passing Time hasn’t hurt him a bit. In fact, it’s probably helped raise the profile of Avennia, which already has gained a strong following and acclaim as one of the rising stars of Washington wine prior to the launch of Passing Time.

“It’s hard to quantify,” Peterson said. “I think it’s been good. Having another high-profile winery in the place and having Avennia associated with that is a good thing. When you’re name-dropped in Fortune magazine and Sports Illustrated, that’s PR you can’t even hope for.”