Terry Brandborg, who grew up in San Francisco, began making wine as a hobby. That ultimately become an obsession and, ultimately, a profession. He launched a winery in California before relocating about 15 years ago to Southern Oregon.

We recently stopped by Brandborg Winery in tiny Elkton to chat with Brandborg.

From longshoreman to winemaker

Brandborg started out as a city guy, growing up in San Francisco. After graduating from college, he spent the next 25 years working on the San Francisco waterfront doing longshore warehouse work.

When he decided to try his hand at winemaking, he went in with both feet.

“I started making wine as a home winemaker in 1975,” Brandborg told Great Northwest Wine. “Like a lot of things in my life, it was an accident.”

His uncle was a home winemaker, and Brandborg was quite fond of him and decided to join him in the hobby.

“So I went and picked a half-ton of grapes. I made a barrel the very first year, and it turned out pretty well,” he said.

A neighbor started growing grapes in the relatively cool Anderson Valley in Mendocino County north of the Bay Area, which introduced Brandborg to cool-climate viticulture.

“I started hanging around up there, so I really cut my teeth on aromatic whites and Pinot Noir.”

His interest in winemaking eventually became a passion that overtook his interest in his day job, so Brandborg launched Brandborg Cellars in 1986 in his 500-square-foot garage in Fairfax, Calif., in Marin County. He made 300 cases that first year and eventually grew it to 1,000 cases before finally outgrowing the space and moving to a warehouse space in Richmond.

At 3,500 square feet, the new space was much better – even if the neighborhood wasn’t.

“There were kids with walkie talkies on the corners,” he said. “It doesn’t take a brain surgeon to figure what’s going on in this neighborhood. I was there for 10 years and never had any issues or any problems. I told people I had my drug trade, which was legal. And they had their drug trade, which wasn’t.”

He’d tell his visitors to be sure to lock their cars and not to leave any valuables in plain sight if they decided to come to the winery.

Through the years, Brandborg built his winery to a respectable 2,500 cases of annual production.

From the Bay Area to Elkton

After going through a divorce, Brandborg met his new wife, Sue, at a tasting in Jackson, Wyo. They hit it off through regular letters back and forth, and ultimately she moved to the Bay Area to be with him and get married.

In 2000, they went on a road trip to Oregon’s Umpqua Valley to visit friends and visited several wineries. One of the newer producers was Abacela near Roseburg. Brandborg and Abacela owner Earl Jones quickly became friends.

“We’d been looking for land for a couple of years in California in coastal river valleys. Earl said, ‘You should go check out Elkton. They’ve been growing Pinot Noir, Riesling and Gewürztraminer there since 1972.’ ”

The Brandborgs didn’t make it to Elkton on that visit, but they returned the next year.

“I thought it felt appropriate,” Brandborg said. “I had a gut feeling that it looked like it was the appropriate climate for Pinot Noir, which is what we wanted to plant.”

He headed home and spent the next two weeks studying historical climate data for the Elkton region. He became more convinced, so they headed back and found a real estate agent. They found a hilltop property with 145 acres and a house on it – for the same price that they might pay for 20 acres and no improvements in the Anderson Valley.

“We didn’t have the large fortune to turn into a small fortune,” Brandborg said with a smile. “It fit our budget.”

And it fit what they wanted to accomplish. But realizing how remote the property was from downtown Elkton, they also bought an empty lot on the main drag in town and built their production facility and tasting room.

By January 2002, the Brandborgs had left San Francisco behind and were busy creating Brandborg Winery, the newest operation in Elkton, population 193. It has been a bit of a culture shock, particularly the change in nightlife.

“But there’s no turning back,” Brandborg said. “We love Oregon. We love the wine scene here in Oregon. The collegiality of the industry is something that really appeals to me.”

We think of Southern Oregon as a warm region, particularly compared with the Willamette Valley to the north, where the bulk of Oregon’s wine industry is located. But Elkton stands out from its surroundings. It’s a half-hour drive to the Pacific Coast, and it’s a cool area, perfect to fulfill Brandborg’s passion for cool-climate varieties.

Not long after moving to Oregon, the federal government approved the Southern Oregon American Viticultural Area, a region that encompasses the Umpqua and Rogue valleys. It was meant to differentiate the warmer climate of Southern Oregon from the cooler areas up north. But that didn’t really help Brandborg because he wasn’t interested in Tempranillo, Syrah or Cabernet Sauvignon – at least not from the warmer areas.

“Our influence is the inflow of cool air off the Pacific,” he said. “I think these areas have the best insurance for staying cool as warming happens.”

So Brandborg worked with other grape growers and winemakers in the area to petition the federal government for a small AVA that would encompass this cool region. In March 2013, the Elkton Oregon AVA was granted.

From 2002 to 2013, Brandborg’s estate vineyard never topped 2,000 growing degree days (a measurement of daytime warmth), which is supposed to be the minimum threshold for ripening European wine grapes. In 2014 and 2015, his vineyard topped 2,000.

“Whether this is going to be an ongoing trend or not, I believe we’re still cooler than most of the other regions in the state,” he said. 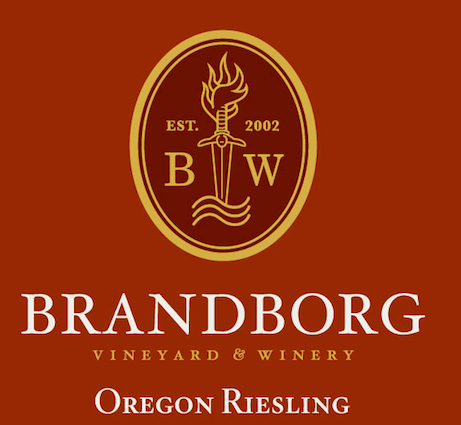 Through the years, Brandborg’s wines have gained a following, thanks to his dedication to cool-climate varieties such as Riesling, Pinot Noir and Gewürztraminer. Brandborg was Wine Press Northwest magazine’s 2015 Oregon Winery of the Year in recognition of his stellar wines and hard work.

A year ago, his 2011 Riesling was one of the top wines in the Judgment of Geyserville tasting that compared Rieslings from six different North American regions. And in 2010, acclaimed New York Times wine writer Eric Asimov recognized Brandborg’s Gewürztraminer as one of the finest efforts in the United States.

Many of Brandborg’s wines have stories behind them. Two of his favorites are Pinot Noirs. One is from his estate Ferris Wheel Vineyard, and one is called Love Puppets. Both, of course, need a bit of explaining.

While he and Sue were courting via letters in the late 1990s, she included a fun little present in one of her notes to him.

“She sent me a silly little refrigerator magnet,” he said fondly.

It had a young couple sitting together on a ferris wheel and was called “Love Puppets.”

“So we named our estate vineyard the Ferris Wheel Vineyard,” he said. “When we came out with a different tier of Pinot Noir, we called it Love Puppets.”

And they still have that magnet on their refrigerator.

These days, Elkton is slowly becoming a wine destination, thanks in no small part to the Brandborgs. It is just 20 miles from Interstate 5, making it an easy visit to Portlanders driving to Ashland or elsewhere in Southern Oregon.

The town is home to six wineries, and a bit of new planting is going on in the Elkton region, much to Brandborg’s delight. In all, the Umpqua Valley has 26 wineries and tasting rooms. Being three hours away from Portland, it makes a perfect weekend getaway for wine lovers.

“You can go from cool-climate wines to warm-climate wines in less than an hour’s drive,” Brandborg said. “So there’s a lot of diversity that people can sample on a visit. We just hope that what we’re doing here will attract even more attention to the area.”