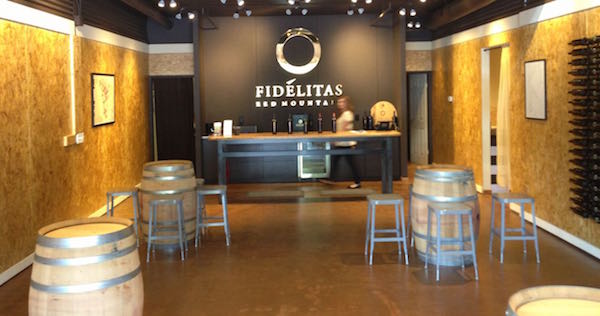 Fidelitas Wines in Richland, Wash., has two satellite tasting rooms, this one in Woodinville and another on Red Mountain, thanks to a law passed in 2000. A bill is working its way through the state Legislature that would allow Washington wineries to operate as many as four satellite tasting rooms. (Photo by Andy Perdue/Great Northwest Wine)

OLYMPIA – A revived bill in the state Legislature to allow Washington wineries to operate up to four off-site tasting room is working its way through the House for a second time.

The House Government & Information Technology Committee staged a hearing Monday on the bill by Rep. Cary Condotta, R-East Wenatchee, that would increase the number of allowable off-site tasting rooms per winery from two to four under a domestic winery license. That bill began its journey in 2015, but it stalled in that year’s long, complicated and contentious legislative session.

Condotta told the committee Monday that wineries – especially small ones – need the extra tasting rooms to expand their customer bases.

Paul Beveridge, owner and winemaker of Wilridge Winery in Seattle and Yakima, said small wineries have trouble becoming known beyond their immediate towns, and the extra tasting rooms will increase their exposures to customers.

Because this hearing session handled a great number of bills, no committee vote was taken Monday on whether this bill should be sent to the full House. However,  committee members voiced no concerns or objections about the bill. It is expected that the committee will vote to send the bill to the full House at a later date.

In 2000, a change in state law allowed Washington wineries to open satellite tasting rooms. Before that, the only way a winery could operate an additional tasting room was to have wine production on the premises.

The change in 2000 provided wineries with the opportunity to have up to two tasting rooms in addition to their main production facility. Wineries didn’t begin to take advantage of the new law until a few years later.

In August 2008, Bookwalter Winery in Richland became one of the first wineries to open a satellite tasting room across the state in Woodinville. Today, Woodinville is home to about 130 tasting rooms – many of which are satellites for wineries in the Yakima and Walla Walla valleys.

Wineries also are opening satellite tasting rooms in other cities, including Leavenworth and Spokane.