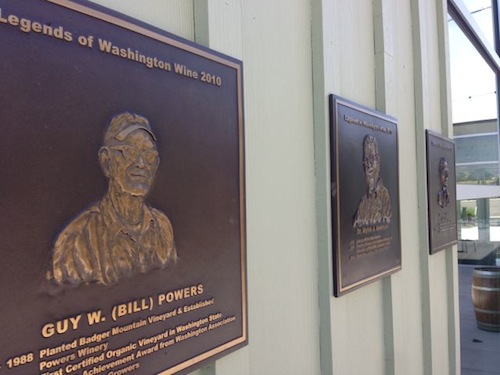 This summer, Chas Nagel will be added to the Legends of Washington Wine Hall of Fame at the Walter Clore Wine & Culinary Center in Prosser. Each inductee is honored with a bronze plaque. (Photo by Andy Perdue/Great Northwest Wine)

PROSSER, Wash. – One of the true legends of the Washington state wine industry will be honored this summer by being inducted into the Legends of Washington Wine Hall of Fame.

Charles “Chas” Nagel, a food scientist for Washington State University in the 1960s and 1970s, will be enshrined in August at the Walter Clore Wine & Culinary Center.

Nagel, known as one of the “big three” of Washington wine research, worked closely with Walter Clore and George Carter to establish that Washington’s Columbia Valley was a viable region for growing European wine grapes. Nagel died July 5, 2007.

“As a young child, my dad would have experiments going on in the lab,” said Liza Nagel, his daughter. “Mom used to make him take at least two of us kids with him. I had no clue until high school that my dad was somehow involved in the wine industry.”

Ron Irvine, author of The Wine Project, the definitive history of the Washington wine industry, got to know Nagel quite well while he was researching the book in the mid-1990s.

“He organized all the wine tastings they did at the university (in Pullman),” Irvine said. “He brought credibility to it. He set up scientific measures for tasting the wines.”

From wine country to Pullman

Nagel grew up in the Napa Valley, and his father worked in the wine industry as cellarmaster at Louis Martini Winery. When he and his wife, Beatrice, moved to WSU in Pullman, they were initially shocked by its remoteness.

“He had a sophisticated palate,” Irvine said. “When he came to Pullman, they thought it was out in the boondocks. I think he was shocked by Pullman, but eventually they came to love it.”

In the 1960s, Nagel, Clore and Carter launched what became known as The Wine Project, a decade-long study to find out the viability of wine grapes as a commercial crop in Eastern Washington. Clore implored farmers throughout the Columbia Valley to plant grapes. In 1964, Nagel made the first wines in the project. After two vintages, Carter took over the winemaking.

In 1969, Nagel and Clore were among the experts who testified before the Washington Legislature in Olympia as it considered what came to be known as the California Wine Bill. Up until that time, most Washington wineries made sweet, fortified wines that were sold through taverns. The Washington wine industry at that time was propped up by protective tariffs that made wines from California and beyond prohibitively expensive to sell in the state.

The goal of the California Wine Bill – sponsored by lobbyists for the burgeoning California fine wine industry – was to remove the tariffs and level the playing field. When the bill was passed, it all but destroyed the Washington wine industry because California table wines were vastly superior.

In the minds of Clore and Nagel, this was a good thing because it was going to force Washington winemakers and grape growers to begin using proper European wine grapes and learn the craft of producing great wines.

During his testimony, Nagel told lawmakers, “As a scientist, I would like to accumulate more data, but I personally am convinced (that Washington can compete in fine wine production).”

Collecting data for The Wine Project

The Wine Project is a 1997 book written by Ron Irvine with Walter Clore. It chronicles the history of Washington wine, including stories of how Chas Nagel was instrumental in research that helped the industry in the 1960s and ’70s.

While Clore and Carter worked on The Wine Project at WSU’s research station in Prosser, Nagel spent his time in Pullman. He would take the finished wines and conduct scientific tastings, with volunteers spending up to two weeks at a time going through the test wines and scoring them.

These tastings were a vital part of The Wine Project and went into the trio’s report that came out in the 1970s noting that indeed Washington could make quality table wines.

Today, thanks to the research and work of Nagel, Carter and Clore, Washington is the nation’s second-largest wine producing state with more than 800 wineries and 55,000 acres of vineyards.

His daughter, Liza, followed him into academia, earning a Ph.D and becoming a professor. She left WSU about two years ago to move to the South. Today, she is the associate vice president for academic affairs at Our Lady of the Lake University in San Antonio, Texas.

She holds fond memories of her father and is thrilled that the Washington wine industry is honoring him with the Legends of Washington Wine Hall of Fame induction.

“My dad was a ridiculously humble guy,” she told Great Northwest Wine. “He loved wine but was not a snob about it. I know he would be embarrassed by this honor. He saw himself as a professor. It is so gratifying to meet people who knew my father. I just knew him as Dad.”

The Legends Gala will take place Aug. 12 at the Clore Center in Prosser.