The Koenig brothers are scheduled to to plant J Victor Vineyard, a 32-acre project on Idaho’s Sunnyslope, for Boise businessman Jay Hawkins in April. (Photo by Greg Koenig/courtesy of J Victor Vineyard)

At this point, just 1,300 acres of wine grapes are grown in the Gem State. That figure matches barely more than half the total acreage of vineyards draped across Red Mountain – the smallest American Viticultural Area in Washington.

However, there are three young and promising plantings of varying scale in the tree fruit Sunnyslope region, west of Caldwell. Each of these vineyards offers a view of the Snake River, but the players come from different backgrounds: Boise businessman Jay Hawkins, the row crop farming Weitz family and the Williamsons – respected grape growers with branches of orchardists in their family tree.

“It’s been a bit grim around here for quite a few years because nobody was talking about planting grapes until the Weitz family came along,” winemaker Greg Koenig told Great Northwest Wine. “We didn’t expect to outstrip the supply of grapes in Idaho, and then the price of grapes was so low that nobody wanted to grow grapes. It was a vicious cycle that’s been tough to break out of.”

Gregg Alger, who chairs the Idaho Wine Commission and owns Huston Vineyards in Caldwell, said, “Those are the three biggest planting changes that we’ve had in Idaho for a while. Things need to happen here.”

And these new vines give the industry perhaps its most important talking point as the commission’s annual meeting begins Wednesday in Boise. 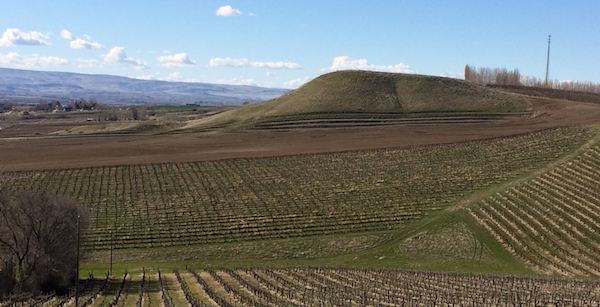 The future J Victor Vineyard, at this point a long blanket of freshly tilled soil overlooking the Snake River, will be a 32-acre planting of red varieties. In the foreground is Symms Vineyard, one of the oldest sites in Idaho. (Photo by Greg Koenig/courtesy of J Victor Vineyard)

Hawkins, a vice president at Micron Technology, has arranged to plant 32 acres of red grape varieties on the Sunnyslope. Koenig and his brother, Andy, of Koenig Distillery and Winery, will spearhead the project for Hawkins, which will be called J Victor Vineyard.

“He’s a native of Idaho who has done well in Boise and wanted to invest in something out here on the Sunnyslope,” Greg Koenig said.

Rows will be plotted today via GPS, and the planting begins in April.

“It’s really a great site,” Koenig said. “We’ve always been worried that someone would develop it for housing because the view of the Snake River from the top of the slope is amazing.”

To a certain extent, the Hawkins project is a partial replant. A decade go, Koenig used Windridge Vineyard as a source for his delicious Riesling ice wine, but a weakened market for the noble German grape in the Idaho wine industry had the vines out of production for three years, Koenig said.

“They were old vines with a crappy trellising system from 1978, an overhead sprinkler and half-baked drip system,” Koenig said. “There was quite a bit of nematode activity too, so we tore it all out and started over.”

Hawkins purchased the property just west of Bitner Vineyards from Dyke Nally – former head of the Idaho State Liquor Division – and his sister, state Senator Patti Ann Lodge. The Koenigs, longtime friends of Nally, live and work just below the old vineyard and approach the site with a sense of wonder.

“My brother and I signed on to build the vineyard and manage it for Jay,” Greg Koenig said. “He wants it planted all this spring and agreed to do it under one stipulation – that we do it and do it right. So we’re installing the right drip system and doing all the right contouring. We already did a deep rip and treated the soils.”

Only red grapes in store for J Victor Vineyard 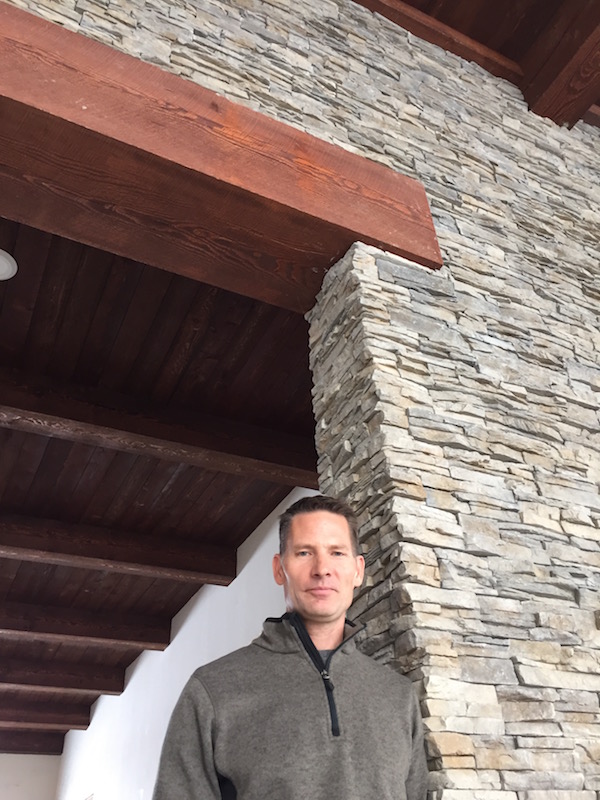 Greg Koenig, who has been making wine in Idaho for more than 20 years, stands under a beam of old timber inside the Koenig Vineyards tasting room he will open this spring in the Sunnyslope Wine District of Caldwell. (Photo by Eric Degerman/Great Northwest Wine)

Koenig also got to cherry-pick the varieties he will plant. His wish list will get filled with Cabernet Sauvignon (12 acres, four clones), Tempranillo (6 acres), Sangiovese (4 acres) and smaller blocks of Malbec, Nebbiolo, Petite Sirah, Petit Verdot and Zinfandel.

“There were 18 acres of Riesling, and the rest of it was sheep pasture for decades and decades,” Koenig said. “The Tempranillo is going to go where the sheep grazed, which seems like a very Spanish thing to do.”

That Riesling is gone. In fact, no white grapes will be planted.

In Koenig’s mind, J Victor Vineyard will be the most bulletproof in the Snake River Valley, a region with sites that tickle 3,000 feet of elevation.

“There’s this 40-year-old apricot tree that’s literally never frosted,” Koenig said. “The site has got all this air drainage with a south-facing aspect and this tremendous slope down to the river. We get plenty of heat in this part of Idaho, so I’d just like to extend the season two weeks on either end to hang Sangiovese, Cabernet Sauvignon and Zinfandel longer. The steep hillside should allow us to do that.”

In total, the parcel is 56 acres, but 24 of those are unsuitable for vines, Koenig said. 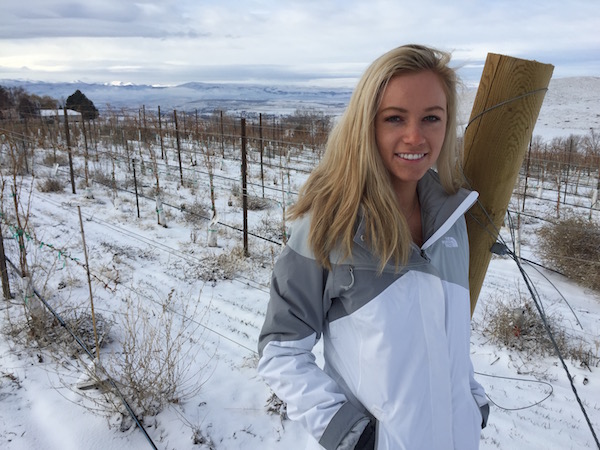 Sydney Weitz-Nederend has partnered with her father, Joe Weitz, to plant Scoria Vineyards in Idaho’s Snake River Valley. She and her husband, James Nederend, will release their first wines in June 2016. (Photo by Eric Degerman/Great Northwest Wine)

Less than two year ago, about eight miles to the southeast of J Victor Vineyard as the crow flies, on a ridge with sieve-like volcanic soils between Lake Lowell and the Snake River, Sydney Weitz-Nederend and her father, Joe Weitz, established Scoria Vineyards.

“The entire site is 250 acres, with 200 of it perfect for red wine grapes,” Nederend said. “I’d like to reach about 100 acres by 2022. We do have other property that definitely would be suitable for some whites, but there’s a larger demand for high-quality reds right now.”

The Weitz (pronounced wheats) family has farmed this valley for nearly a century, arriving from Los Angeles to plant orchards. They’ve grown their diversified business in Idaho to 3,000 acres, and winemakers in the region say the family is a sure-bet to succeed as grape growers because of the heavy equipment it already owns, an experienced workforce, farming expertise and business acumen.

Besides, grape vines made sense, especially with Hells Canyon Vineyard nearby.

“As the orchards came out, our family tried row crops here – including potatoes – but the soil was too sandy and there was enough slope that it wasn’t ideal for row crops,” Nederend said. “It was used as pasture for quite a while and  just sitting there, but I could see the potential for wine grapes.”

In 2014, Nederend established Scoria by planting 6 acres of Malbec and 2 acres of Petit Verdot. Last year, the shortage of vine material throughout the Northwest stalled her expansion, but in 2016, she will add 9 acres – an equal split of Cabernet Sauvignon and Merlot.

“So we’ll have four of the five classic Bordeaux varieties,” she said.

Nederend, 23, who graduated from Boise State with a finance degree, tends the vines herself. She also continues to hone her sales and marketing skills on weekends working in Koenig’s tasting room. She and her husband, dairyman James Nederend, will launch their Scoria brand in June with a 2013 Syrah and 2013 Mourvèdre. Both wines came off Skyline Vineyard — the state’s largest at 400 acres — and were made by Earl Sullivan of Telaya Wine Co. She contracted with Koenig to make some of her 2014 wines.

Scoria already is developing a wine club, which Nederend said is a critical step in showing her father some return on his investment in the Idaho wine industry.

“He’s definitely always pressing me about that,” she chuckled. “He’s a little bit stubborn, but he’s also so much of a go-getter that if anybody can do it effectively, it would be him. We already have the site, the access to the tractors and the labor. We know it’s a long time of waiting until we see the horizon, but we weren’t too intimidated.” 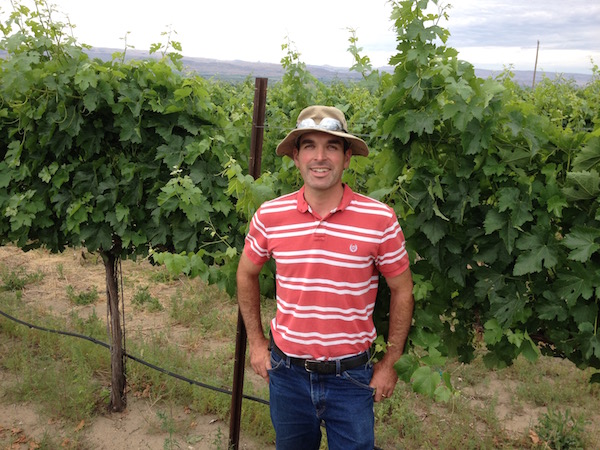 Mike Williamson of Williamson Vineyards will oversee 12 acres of vineyard plantings for his family’s winery and seven customers in the next two years. (Photo by Eric Degerman/Great Northwest Wine)

This spring, Koenig also will keep his eye on his longtime friends and neighbors at Williamson Vineyards, who plan to transition 6 acres of Riesling to Cabernet Sauvignon and Sangiovese. The Williamsons expect to plant 6 more acres in 2017, said Koenig, who makes their wine.

“They’ve asked a bunch of us what we would prefer, and they got requests for Malbec and Tempranillo,” Koenig said. “Sangiovese was on my list because I’d like to try to make a rosé like Rob Griffin.”

There’s precious bandwidth for Koenig to spend on any of these projects, but he’s not complaining – especially with J Victor Vineyard being planted directly uphill from his new tasting room.

“With the construction of my tasting room and the winery and trying to run a business, it’s crazy,” Koenig said with a chuckle. “But in my opinion, this is the best site in Idaho. It’s a miniature Arena Valley Vineyard, only the elevation is a bit higher and it’s right in the heart of the Sunnyslope, which is where we like all of our fruit to come from.”

News of all these plantings has the normally mild-mannered Koenig almost giddy. That’s understandable because after all, he will be making wine from all three sites — J Victor, Scoria and Williamson.

“We’re super excited,” Koenig said. “There’s a lot going on in the industry now. This weekend, everybody was out and about touring, and all the tasting rooms around here were full. And I have orders that I can’t fill.”