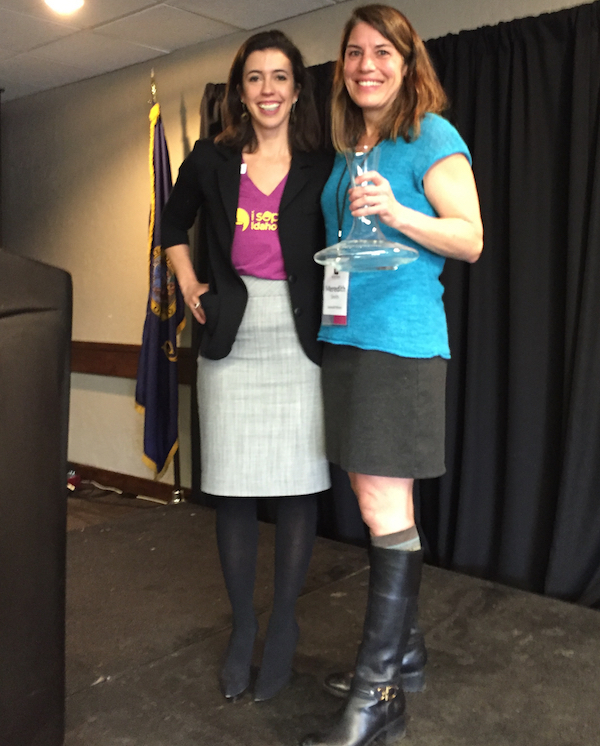 GARDEN CITY, Idaho – The Idaho wine industry took a moment from its annual meeting to honor winemaker Meredith Smith for her work inside and outside Sawtooth Estate Winery.

Members of the Idaho Wine Commission voted the Boise native as its inaugural Distinguished Member of the Year, presenting her with a crystal decanter Wednesday at the Riverside Hotel in Garden City.

“I don’t feel comfortable standing up here alone when I know there is so much help that goes into doing what I do,” Smith told her peers. “That starts with the people in the cellar, the growers I get the fruit from and all the camaraderie and help I get from all the other people in the industry.”

Moya Dolsby, the commission’s executive director, said, “She will volunteer her time, always answer my phone call and help me whenever I need it. Everybody loves her.”

Smith started at Sawtooth in 2009, armed with a certificate from Washington State University’s viticulture and enology program. Five years later, Sawtooth won five gold medals at the 2014 Idaho Wine Competition, including a double gold for Tempranillo.

Last year, she represented Sawtooth as one of three Pacific Northwest winemakers to pour at Vinexpo in Bordeaux – a first for Idaho. Smith’s 2012 Trout Trilogy Syrah was nominated for the event by Wine Spectator editor Harvey Steiman.

Her responsibilities for Seattle-based Precept Wine also extend into two of the Snake River Valley’s largest vineyards, where she helps monitor the Sawtooth Estate and Skyline sites for vineyard manager Dale Jeffers.

“I grew up in Idaho,” Smith said. “I love this state, and I’m so happy that I’m able to be a winemaker here. I’ve been gathering information on this industry for a long time.

“When I graduated from high school in ’86, I received a bottle of Ste. Chapelle Reserve Chardonnay, and it was a big deal for me,” she said with a smile. “I had moved from Riesling. I just didn’t recognize at the time how much I loved wine.”

She pointed to an item she recently found in her personal files, a 1998 magazine item on the Idaho wine industry that featured some of the labels from that era. It was more than 10 years before Smith left a job in real estate to take a $10-per-hour harvest job at Sawtooth.

“These are the true pioneers, and this is why I get to stand up here and take credit for what a lot of these people have been working on for many years,” she said. “I appreciate the time and courage that it took them to get Idaho to where it is today.”

Idaho not only has 51 wineries, but it also grows a wide variety of wine grapes, including everything from Albariño to Zinfandel. (Photo by Andy Perdue/Great Northwest Wine)

Increased support statewide for Idaho wines and news of more vineyards being planted made for a festive climate at the annual meeting.

“My belief is that if you can’t win the hearts of the locals, how do you expect to win regionally or nationally?” said Gregg Alger, chairman of the Idaho Wine Commission.

So in 2012, the commission began to take a closer look at how many gallons of wine are sold in Idaho to residents, retailers and restaurants.

Dolsby said, “It’s phenomenal how far we’ve come. I was kind of a naysayer because I didn’t think we’d be able to move our market share number.”

Despite the increasing national acclaim for Idaho wines, the state’s conservative politics and religious conservatives – combined with the sluggish rate of vineyard plantings – gave Dolsby cause to doubt her industry’s ability to triple its market share in the past three years. This winter, the state’s industry stands at 51 winery and 1,300 acres of vines.

Increased local sales translates into a higher profit margin for the wineries. However, an increasing number of Idaho wineries reached into Washington for grape juice in 2015. That movement was sparked by increased demand for Idaho wine, stalled growth of plantings and a 2015 vintage crippled by the sudden November 2014 freeze and summertime powdery mildew.

“If we don’t put in new vineyards, we’re going to reach a wall on the winery side,” Alger said.

The commission also will continue to seek funds for vineyard research and look for partnerships to help with education and extension services both for winemakers and growers. 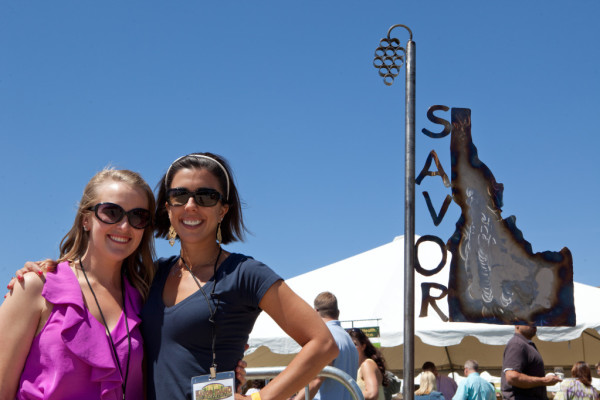 Tickets go on sale March 1 for the eighth annual Savor Idaho. The industry’s wine and food festival at the botanical garden in Boise is Sunday, June 12. Organizers expect the event to be a sellout for the seventh straight year. Demand for all tickets, including VIP badges, continues to surge. Last year, 27 wineries participated, and Savor Idaho was sold out three weeks in advance.

This year, the commission debuts its Savor Idaho North on Thursday, Aug. 18, in Coeur d’Alene, an event that will feature a lake cruise with wine, food and live music. Tickets will be available June 1, which marks the beginning of Idaho Wine Month.

“We are very excited to get this in Coeur d’Alene and covering that part of the state,” said Sara Dirks, the commission’s events and grants manager.

NOTES: The commission will continue to support its “Going Beyond Gold” program, which takes each member-won gold medal from the Idaho Wine Competition and pays for that wine to be entered into a national competition. There were 15 wines sent to the 2016 San Francisco Chronicle Wine Competition. “Eighty percent of them medaled, and 20 percent of them won gold,” Alger said. “How about Idaho wines!”

Last year, the commission rolled out its Best Case Scenario promotion for journalists across the country, a program created by Watershed Communications in Portland and spearheaded by the late Cole Danehower. It cost each participating winery $500.

“The coverage we have gotten is phenomenal,” Dolsby said. “The total project cost us $15,000, and it was some of the best money we’ve ever spent because of some of the articles that have been published.” Dolsby said there are plans for a second edition of Idaho’s Best Case program.