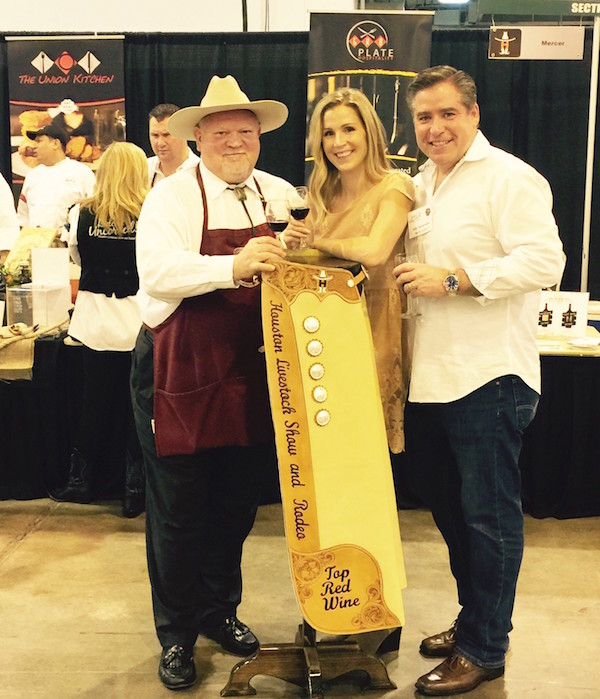 HOUSTON — Texans love to brag about the size of their state and the level of their hospitality, and a number of Washington and Oregon wineries got a sense for both in anticipation of this week’s start to the Houston Livestock Show and Rodeo.

Cally Mercer of Mercer Estates in Prosser, Wash., poured last week for a reported 5,700 wine lovers at Roundup and Best Bites, one of several wine events at Houston’s NRG Center leading up to the rodeo. As this year’s featured region, Pacific Northwest wines are being spotlighted at the rodeo.

“There were so many people!” Mercer told Great Northwest Wine. “It was a little overwhelming at first because I wasn’t expecting something so big, and I’ve never been to a wine event that size, but it was great.”

Last fall, the Mercer Estates 2012 Reserve Cavalie won the title of top red wine at Houston Uncorked, one of the nation’s largest wine competitions at more than 2,400 entries. Instead of a trophy, plaque or medal, the rodeo organizers fittingly present the winning winery with a pair of chaps.

“I didn’t expect a public event for a rodeo to be so wine-driven,” Mercer said.

Jessica Munnell, the Mercers’ winemaker, also earned a belt buckle for her 2012 Cabernet Sauvignon, voted a double gold by judges. Mercer Estates plans to display its top awards inside its Prosser tasting room this month. And despite the lavish awards, Houston Uncorked now generates about $2 million each year in scholarship funds for Texas youth.

“I was shocked by the whole thing and very, very impressed by what they do for charity,” Mercer said. “All the volunteers are very friendly, and the people attending the event seem very interested in Washington wines.”

Mercer, 25, a graduate of Prosser High School and the University of Idaho, recently moved to San Antonio with her fiance. She heads up graphics design and handles marketing for the winery operated by her cousins, Rob and Will Mercer. She and Joel Thompson, regional sales director for Mercer, poured at Best Bites. Assisting them was Texas master sommelier Guy Stout, a wine buyer, grower and one of the most influential members of the Texas wine industry.

“It was so fortunate for us to have Guy at our booth pouring with us,” she said. “A lot of people came over at first just to talk to Guy, and it took three people pouring to meet the demand at our table.

Ste. Michelle Wine Estates won the award for the top company from the featured region. Naturally, 14 Hands Winery will display one of Houston Uncorked’s custom saddles at the Prosser tasting room – about a mile from Mercer Estates.

“That rodeo is a way bigger deal than what we think about a rodeo being in the Northwest,” said Kelly Milbrandt, co-owner of Milbrandt Vineyards in Mattawa. “I would like to see more Washington wineries involved in that competition because it makes people take notice, and a gold medal there means something. It will help make up the minds of people who buy wine in Texas.” 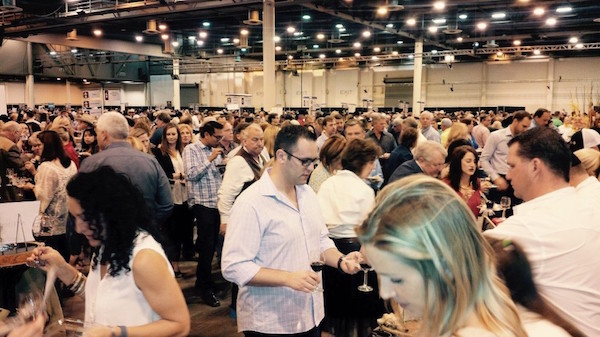 The Mercer Estates 2012 Reserve Cavalie and 2012 Cabernet Sauvignon were featured alongside other Washington state wines at the Roundup and Best Bites, an event staged Feb. 21 at the NRG Center in Houston and attended by an estimated 5,700 wine lovers. (Photo courtesy of Cally Mercer/Mercer Estates)

Houston, at more than 2 million in population, is the fourth-largest city in the nation and a growing market for wine, particularly Cabernet Sauvignon. More than a dozen countries – including Chile, Croatia, France, Italy, New Zealand and Portugal – entered the 13th annual Rodeo Uncorked. And the competition received a record 181 entries from the Pacific Northwest.

“Four years ago, I started going into that market a couple of times a year, and I’d get asked, ‘How did you at at the Houston Rodeo competition?’ ” said Milbrandt, whose father, Jerry, co-founded the winery. “That was their Wine Spectator in terms of buying decisions. If you don’t have a medal from the competition, you don’t have much going for you down there.”

“When we started this wine garden, we had big signs that read, ‘We have wine that won at our competition,’ ” Earthman Baird said. “People would say ‘What competition? This is a rodeo, and we drink beer here.’

“Now, the wine garden opens at 4 o’clock every day during rodeo, and if you are not here by 4:15, you do not get a seat,” she continued. “That’s where we’ve come in 13 years. This is the place to be. Now, we even get cowboys out here. Granted, we do sell a fair amount of off-dry wine out here, but we sell plenty of Cabs and other reds, too.”

“People can come out here to the rodeo and buy because we don’t do a crazy markup,” Earthman Baird said. “And they may come out here for all 20 days – which many people do. It’s a love/hate relationship. The restaurants hate us because everybody is out here. Restaurant sales go down during the rodeo – and we hear about it.”

Mercer, who graduated with a degree in interior design, looks forward to experiencing the rodeo’s wine garden some day now that she’s a Texas resident.

“It’s so great that it’s so popular,” she said. “I was honestly blown away. I figured that since it was a rodeo, it would be beer and chicken legs – not wine.”

And Mercer said she’s kicking herself for not wearing her cowboy boots.

“It was definitely Western attire,” she said with a chuckle. 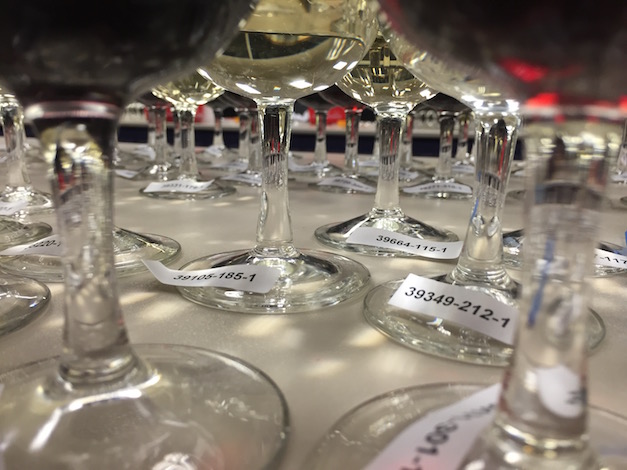 The Houston Livestock Show and Rodeo International Wine Competition is staged in November, more than three months in advance of the rodeo, which runs March 1-20. (Photo by Eric Degerman/Great Northwest Wine)

The wine competition in Houston is less than 15 years old, and its continued success seems guaranteed.

The Houston Livestock Show and Rodeo, which began in 1932, has raised more than $400 million to scholarships and other educational youth programs during its history. Its popularity and financial standing in the community is significant.

“And the reason we do it this weekend is because the Nutcracker, the huge Christmas shopping market that takes over the lower level, is the fundraiser for the Houston Ballet. The parking lot is full and it’s all crazy, which is why we the Nutcracker market and the wine competition together on a weekend when the Texans don’t play at home.”

The annual Rodeo Uncorked! Champion Wine Auction and Dinner attracted more than 700 buyers who bid on 57 live auction and 76 silent auction lots, featuring top wines from the competition. A lot of Orin Swift Cellars 2013 Cabernet Sauvignon from Napa Valley – the grand champion and best of show – sold for a price of $125,000. 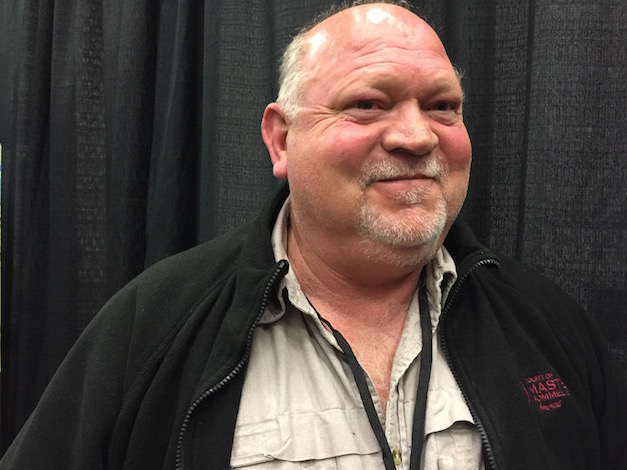 Guy Stout is a master sommelier, Texas wine grape grower and executive with one of the nation’s largest wine distributors. (Photo by Eric Degerman/Great Northwest Wine)

More importantly for the wineries who enter is the opportunity to get their wines in front of buyers and consumers. There are 100 judges working the two-day competition, and more than 90 percent of them are buyers, wine directors and sommeliers in Texas. Glazer’s, H-E-B and Kroger are well represented at Houston Uncorked.

Milbrandt said, “We sell stacks of wine to H-E-B, and they are patting themselves on the back because three of the wines that we sell them won a double gold, a gold and a bronze medals. They discovered us for Texas.”

The Milbrandts, who operate a tasting room in Prosser, also pay attention to the list of restaurant companies represented on the Houston panel.

“Some of the judges are from Landry’s, which is based in Houston,” Milbrandt said of the corporation whose holdings include Claim Jumper, McCormick & Schmick’s and Morton’s. “Any opportunity we can use to get in front of a Landry’s buyer is only going to help us in the long run.”

No retailer, however, wants to be disappointed, Earthman Baird said.

“One of the criteria for entering the competition is that the wines must be available in the market place in March because that’s when the rodeo runs,” Earthman Baird said. “You want to reward the wineries that are doing good things.”

There’s also a fair amount of affluent, college-educated consumers in Texas because of the fossil fuel industry.

“One thing I like about our market is they are pretty exploratory – maybe not as much as Austin, Texas – and I think that the wine garden and the wine competition has helped to expand their horizons in tasting wine,” Earthman Baird said. 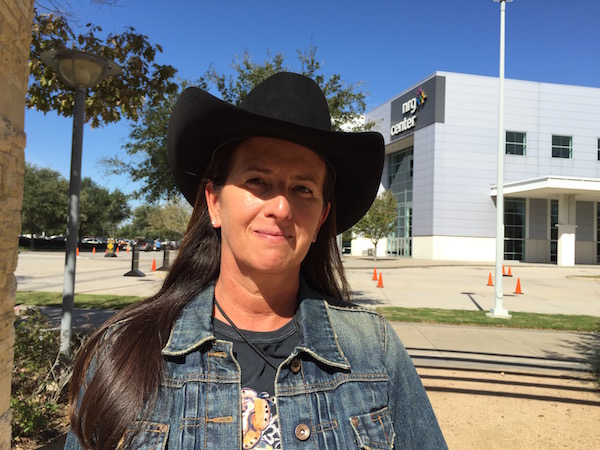 The wine industry has been a second career for Earthman Baird, who entered the trade by moonlighting at Houston Wine Merchants then developed her BevCo International company.

“We always carried wines from Oregon and Washington,” she said. “I’ve been in the wine industry for almost 25 years, but Idaho was self-discovery for me. Now, some people view Oregon and Washington as “The West” and automatically include them with California, so from a consumer standpoint that’s not scary. You start trying to sell them a Norton from Missouri, and they are not so sure about that.”

A natural thirst for Cabernet Sauvignon and Merlot explains why Washington wineries have found a growing audience in Houston.

“Merlot and Cab have been the big things in our market for a long time, and I think a lot of it has to do with the beef industry and our preferences for food,” she said. “We’re not a seafood community, which is sort of crazy because we are right here on the Gulf Coast, but we don’t get enough good seafood out of there. So much of it is imported and frozen and boring. It’s not a major focus, which I find sad.”

While there are some talented chefs and innovative restaurants that do shine fresh seafood, she describes the culinary scene as “very Italian-based and very cattle-based.”

That also explains why the Texas wine industry, which has grown to more than 200 wineries in the state, is focused on producing big red wines.

“Now, thankfully, Guy Stout has planted a vineyard, so you have more people looking to plant things that make sense here in the center of the state,” she continued. “In the west part of the state, they have a little greater diurnal temperature and they can grow more of the traditional grapes.”

Now that Earthman Baird has stepped away from a leadership position with Houston Uncorked and sold her own wine business, the certified wine educator with a Level 3 diploma from the Wine and Spirit Education Trust has her sights set on the Master of Wine program.

“It requires a fair bit of time and money, but I can bring a unique angle to this,” she said with a smile. “I’ll wear my cowboy hat to exams. Maybe it’ll give me more confidence – a kick-ass attitude.”