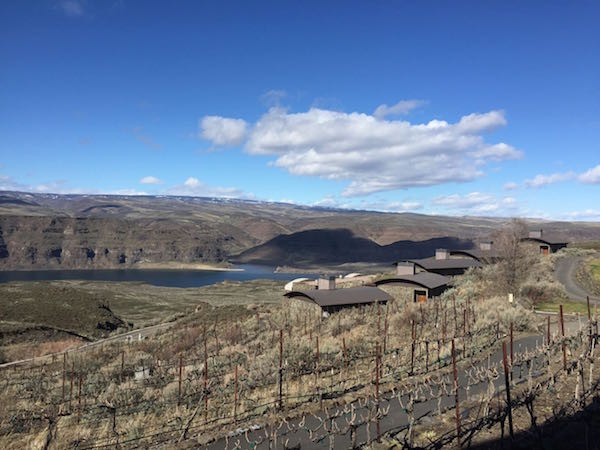 Cave B Estate Winery is a remarkable operation tucked atop basalt cliffs above the Columbia River near the town of George, Wash. The winery is celebrating its 15th anniversary, though its history stretches back to the late 1970s. (Photo by Andy Perdue/Great Northwest Wine)

GEORGE, Wash. – In one of the most remote and startlingly beautiful regions of Washington, one winery is celebrating its 15th anniversary.

Cave B Estate Winery has a fascinating history that actually stretches back more than 35 years, and on Saturday evening about 150 friends, fans and customers gathered in the winery’s barrel room to toast its success.

The origins of Cave B extend back to 1978, when Seattle neurosurgeon Vince Bryan and his wife, Carol, began looking for land to plant a vineyard and build a dream. They found several hundred acres atop basalt cliffs some 900 feet above the Columbia River. By 1980, they started planting grapes.

Back then, Washington’s modern wine industry was in its infancy, with fewer than 25 wineries in operation.

In 1982, the Bryans launched Champs de Brionne, and their first winemaker began using those young estate grapes to make wine. A year later, they were ready to open their winery, and when 1,200 people RSVP’d to attend the grand opening, the Bryans hired a band to play in a natural amphitheater adjacent to the winery.

That led the Bryans to realize that music could help sell wine, so they began to bring in musical acts. In 1984, they hired a talent agent, and for the next decade, the concerts continued to grow. By 1993, the Bryans were ready to sell The Gorge Amphitheater, which now can accommodate 28,000 concertgoers and is considered one of the finest concert venues anywhere in the country.

Today, the venue is managed by Live Nation and plays host to concerts and events such as the Sasquatch Music Festival.

When the Bryans sold the amphitheater, they also shuttered Champs de Brionne, primarily because it was in the middle of the amphitheater property. While The Gorge Amphitheater was a tremendous success, the winery never quite lived up to the Bryans’ hopes. 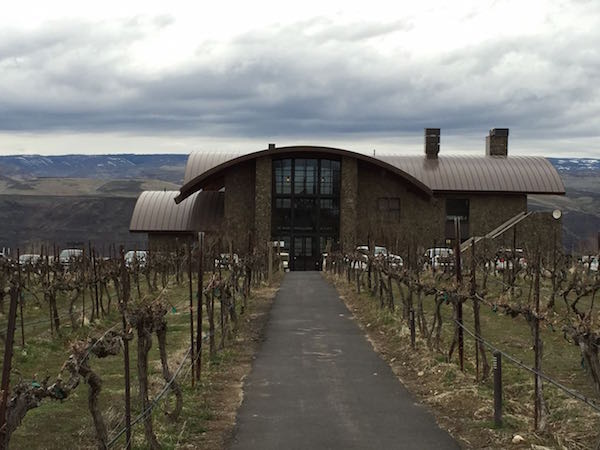 Tendrils Restaurant is part of Cave B Estate Winery and is amid the vines near the world-famous Gorge Amphitheater near George, Wash. (Photo by Andy Perdue/Great Northwest Wine)

Though Champs de Brionne closed, the Bryans kept their vineyards on either side of the amphitheater and sold the grapes annually to other wineries. They returned to Seattle, where Vince Bryan invented the artificial disc for the human spine. He created Spinal Dynamics, a company he sold to Medtronic in 2002.

In 2000, the Bryans were itching to get back into the winery business, so they launched Cave B. They approached Brian Carter of Brian Carter Cellars to make a little bit of wine some seven years after Champs de Brionne went away.

By 2002, they began construction on the winery with the goal of making 5,000 cases of wine one day. By 2005, they had built the Cave B Inn & Spa, a resort that includes a hotel, guesthouses atop those cliffs, Tendrils Restaurant, space for corporate retreats and, of course, a tasting room.

Though George is basically in the middle of nowhere, Cave B has gained a following not only from the concerts that still go one next door, but also for the stunning views, gorgeous amenities and the wines produced by Freddy Arredondo. He is the Bryans’ son-in-law and an accomplished winemaker who learned his craft at the esteemed Walla Walla Community College viticulture and enology program.

Arredondo, a trained chef who grew up in his family’s restaurant business in Southern California, worked for Cougar Crest Estate Winery before starting at Cave B in 2006 and taking over as head winemaker in 2008.

Cave B grows up 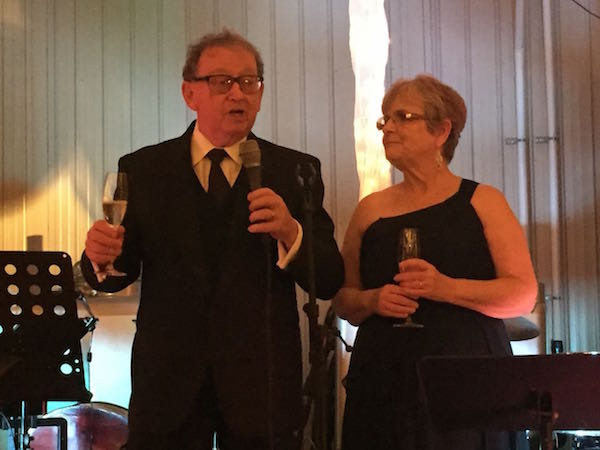 Vince and Carol Bryan raise a toast Saturday evening to the 15th anniversary of Cave B Estate Winery. They were accompanied by about 150 friends, fans and supporters. (Photo by Andy Perdue/Great Northwest Wine)

Today, the estate is home to more than 100 acres of estate vineyards growing about 15 varieties. About 4 acres of the original vines – Chardonnay, Gewürztraminer and Chenin Blanc – remain.

Arredondo sells about three-fourths of the estate fruit to other wineries, either in the form of grapes or finished wine, and he’s happy with what he is producing. So are customers and wine critics alike, as the Cave B wines regularly earn top awards at regional and national wine competitions.

The Bryans remain heavily involved in the winery as well as their medical practice, splitting their time between Seattle and George. Their daughter Carrie – Arredondo’s wife – handles a lot of the business side of the winery, particularly marketing.

In keeping with their love for music and the arts, the Bryans also provided live entertainment in the form of area dancers and singers, all to the delight of those in attendance.

Arredondo’s first 2015 wine – a dry rosé made from estate Merlot grapes – was released during the dinner.