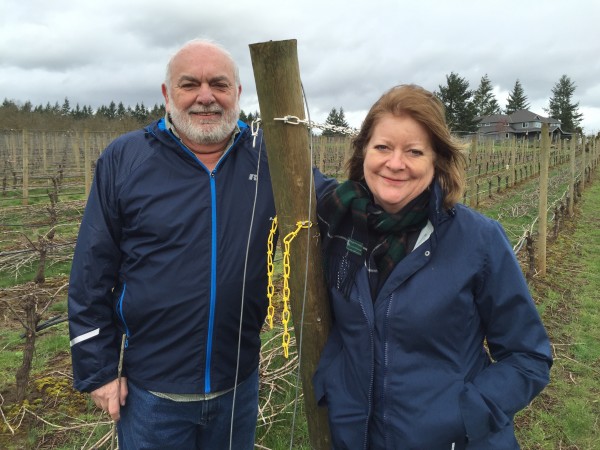 Nick and Sheila Nicholas of Anam Cara Cellars in Newberg, Ore., stand in front of their 6-acre block of vineyards in the Chehalem Mountains American Viticultural Area. They recently announced the sale of Nicholas Estate Vineyard near Parrett Mountain to Celia and Ken Austin, III, of Rain Dance Vineyards in Newberg. (Photo by Eric Degerman/Great Northwest Wine)

Ken Austin III, and his wife, Celia, purchased 30 acres of Nicholas Estate Vineyard, a picturesque and award-winning parcel in the Chehalem Mountains American Viticultural Area just north of Parrett Mountain near Newberg. Wines produced from the 2015 vintage will be the first under new ownership: Rain Dance Vineyards.

“Celia and I have not acquired property to just acquire property,” Ken said. “We’re very much stewards of the land, and their vineyard is actually divided into six tax lots. It was done in the early 1900s, but those are still valid. Someone could have cut that property into six pieces.”

The discreet transaction leaves the Nicholases with a tidy 6-acre block of estate vineyard below their beautiful home, a property they reclaimed from orchards and brambleberry thickets starting in 2001. Almost nothing will change for Anam Cara, they said.

“It’s worked out incredibly well for all of us,” Sheila said. “It was nice to keep it local and sell it to a good family that we like and respect very much.”

Nick added, “And a family that has been here for generations.”

They formalized the sale more than a year ago, and shared the news with the Anam Cara wine club.

“Actually, the Austins are in our wine club,” Sheila said with a smile. “We just haven’t put a big banner up there. That says something about not just us but also the Austins. It’s just a low-key thing. It’s a win-win for all of us. How much more wonderful could it be for us?

“We’re still here and still have the name, and we’re still going to keep going and buy the fruit from them,” she said.

Nick said, “We wanted the transition to go slowly and sort of kept it quiet so that people wouldn’t say, ‘What’s happening?’ I was the one selling Ken’s fruit last year because I had contracts out for the next three years.” 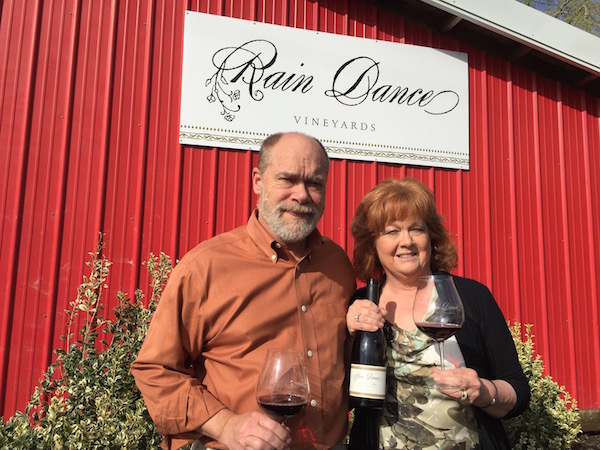 There have been a number of large, high-profile vineyard acquisitions in Oregon in the past several years, but the Austin family made this a quiet yet significant purchase in the fall of 2014.

Ken said, “People heard that it was sold and were worried. The reaction has been, ‘Whew! ”

The Austins said they plan to honor all of the growing contracts signed by the Nicholases.

“They are three-year contracts,” Ken said. “What’s going to happen when they are done? We’re going to renew them.”

“We’ve had some pretty big boys make some good wine with our grapes,” Nick Nicholas said with pride.

“I would expect there to be a Rain Dance Nicholas Vineyard bottling,” Nick said. “That’s why they bought the property – to be able to do that.”

From a management perspective, the transition has been close to seamless. Results Partners viticulturist Leigh Bartholomew has been working with the Nicholases for years. Evan Bellingar, general manager of Results Partners, oversees the Austins’ Rain Dance Vineyards and also knows Nicholas Estate Vineyard.

The Austins said they appreciate the farming practices followed by Nicholases, who look forward to relaxing a bit more on the property with their two energetic, ball-fetching dogs.

“While we’re not certified biodynamic, we do what we can,” Sheila said. “We live here, and we drink the same water the vines do. It’s just the responsible thing to do, and it’s really quite fascinating to see that it works.” 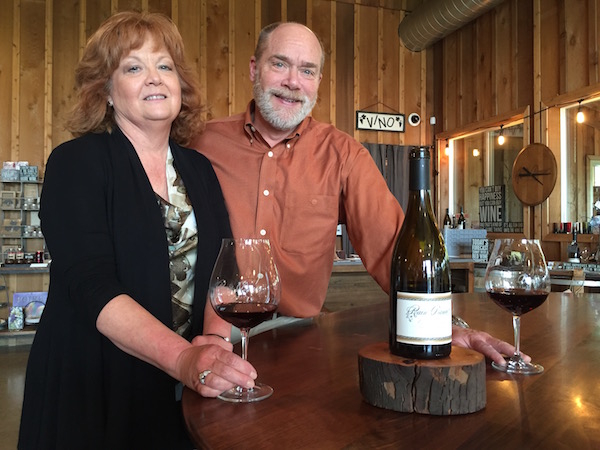 The Austins live near the top of Bald Peak in the Chehalem Mountains and over the years, they’ve developed a number of vineyards and acquired potential vineyard sites downhill from their home toward the upscale Allison Inn & Spa.

“We’re very private,” Ken said. “We grew up with our family being the biggest employer in the county. Everybody knew us and our kids.”

Keeping land out of developers hands seems to be their primary goal, but growing their young winery brand is a close second. They expect to bottle about 1,000 cases of wine in 2016, and they have plans to build a new tasting room not far from their Rain Dance Marketplace on Bell Road.

“We’re a year or two off before we start anything like that,” Celia said.

There are many common threads in and around Newberg for the Austins. Celia grew up just over the hill from what is now Nicholas Estate Vineyard, and she and Ken own 80 acres of undeveloped land atop the Dundee Hills near Alexana Winery.

In a bit of irony, the Rain Dance Vineyards wines are made under a custom-crush agreement at Alexana by winemaker Bryan Weil. The Oregon State University grad spent four years as an assistant winemaker at Hogue Cellars in Prosser, Wash. Heading up sales and marketing for Rain Dance is Meghann Weil – Bryan’s wife, who grew up in the Napa Valley.

“The relationship formed because he was seeking fruit for Alexana’s rosé and Pinot Noir programs,” Meghann said. “If you been tasting Alexana wines, you’ve been tasting Rain Dance fruit.”

“It’s fun to be in on the ground floor. There’s a lot more to come,” Meghann Weil said.

They launched their Rain Dance Vineyards brand last spring with the 2013 Estate Pinot Noir, carving out some tasting room space at the friendly Rain Dance Marketplace. Ken Austin’s impressive woodworking business is showcased throughout the store, including wooden tasting room tables he crafted. Guests and children can feed two friendly llamas from their national champion herd.

They produced 150 cases of that original 2013 release, but the Austins sent a third of that directly into a library program. In 2014, they created another 150 cases of Pinot Noir, but added 50 cases for a Reserve Pinot Noir.

The 2016 vintage will see Rain Dance Vineyards grow to span 58 acres of vines in production. That 1,000-case release will represent less than 10 percent of their total grape harvest.

Celia added with a smile, “And don’t forget Anam Cara.”

One winemaker working so closely with two ownership groups and three brands in two continents – Dr. Revana also operates a winery in Argentina – can lead to problems. The Austins don’t seem concerned.

“Dr. Revana is just the most wonderful man you’ve ever met,” Ken said. 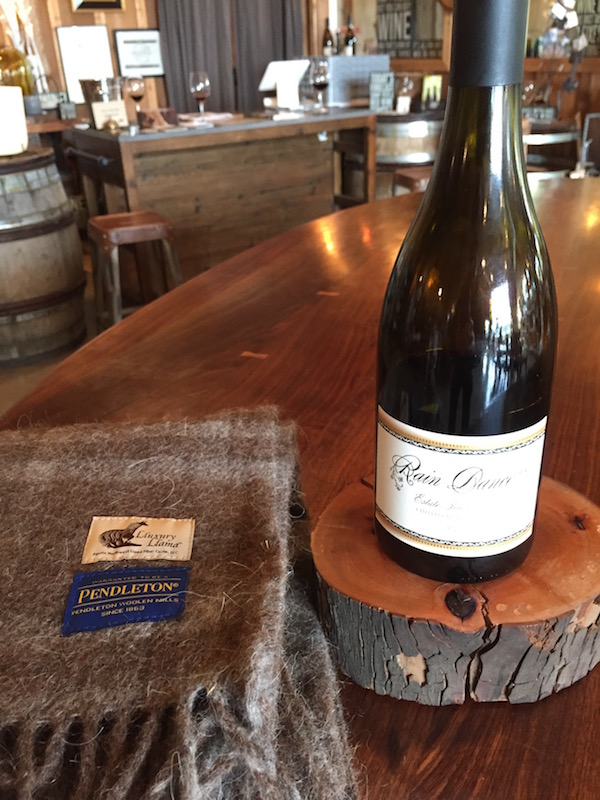 Rain Dance Vineyards wines, woodwork and Pendleton products made with wool from their llamas all are sold at their Rain Dance Marketplace along Bell Road in Newberg, Ore. (Photo by Eric Degerman/Great Northwest Wine)

More than 50 years ago in Newberg, Ken’s parents, Ken and the late Joan Austin, launched A-dec dental equipment company. One of their pet projects in later years was the Allison Inn & Spa, an iconic property Joan presented as her gift to the North Willamette Valley wine industry in 2009. It remains one of many legacies left by the philanthropist, who died in 2013 at the age of 81. One of the best examples of the Austin family’s civic work is that one of Newberg’s public schools is named Joan Austin Elementary School.

“The Allison Inn & Spa was her dream,” Ken said. “She built it for the wine industry. They were visionaries. It was kind of like the Field of Dreams, you build it and people will come.”

Ken’s father lives near the Allison and the small Austin Vineyard that David Adelsheim farms. Ken and Celia point out their dad is not a wine consumer, and he has suggested uses for his children’s land other than vineyards and pasture for llamas.

“He realizes the wine industry is a major part of the economy around here, but he does give us a bad time about the llamas,” Ken III chuckled. “But he’d be the first to say, ‘They have a national champion!’ We’ve had eight national champions over 25 years, but our little paper doesn’t even know that.” 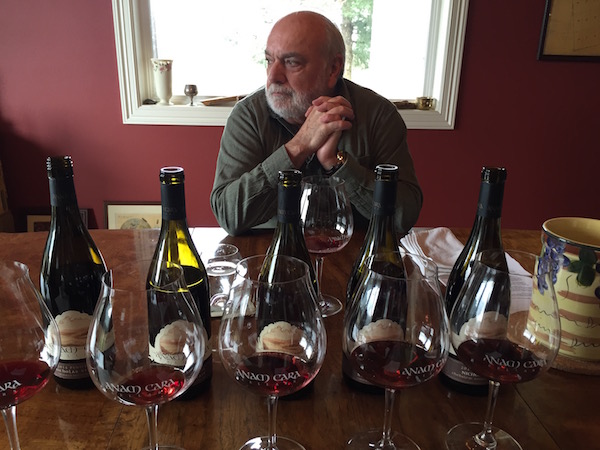 Nick Nicholas of Anam Cara Cellars in Newberg, Ore., looks out at Nicholas Vineyard in the Chehalem Mountains, a 36-acre planting he established in 2001. (Photo by Eric Degerman/Great Northwest Wine)

Health, not finances, drove the decision to sell. Nick Nicholas, 75, and Sheila have been working the 36 acres, transforming it from filbert orchard starting in 2001. As a teen playing sports around Lodi, Calif., Nick said he suffered multiple concussions, shoulder separations and broken bones. Two years ago, he underwent his second open-heart surgery. He’s facing shoulder surgery and perhaps a knee surgery.

“It was difficult, but personally I knew it was coming because physically, I get beat up,” he said as his eyes got a bit red. “I didn’t want to sell it, but I’m no youngster.

“Six acres though, I can still do that and get it done in 30 minutes,” he boasts.

And he doesn’t have to worry about all of his hard work chopped down to make room for homes as Portland continues to push out into the suburbs.

“Ken and Celia are very good friends,” Nick said. “It was on the market formally, and we had people look at it from California and Hong Kong and China and Oregon and a big person from France.

“The tasting room downtown (in Newberg) is doing wonderfully,” he continued. “We’ve got a few distributors out there who are doing a great job for us. We sold the Nicholas Vineyard name when we sold the property – they said ‘We have to have that name.’ ”

Sheila said, “We’re still figuring out what to call our (vineyard). Adelsheim still is putting Nicholas on those vineyard designates.”

And the Nicholas’ were the third folks to sign up for the Rain Dance Vineyards wine club.

Sheila and Nick have lost some good friends within the Oregon wine industry  – Jimi Brooks of Brooks Wines and then Anam Cara’s first winemaker, Aron Hess, who died in 2013, but the Nicholases say the transition to Hess’ assistant – Michael Collier – has been smooth.

There could be a significant and not-so-subtle change to their label someday – a new AVA. There’s a petition in the works to create the Laurelwood AVA.

“It will include us and includes Rex Hill,” Sheila said.

However, the ultimate goal of the Nicholas Estate Vineyard sale is to make life easier for Nick, who grew up on a California farm prior to launching a restaurant company that grew to 1,400 employees.

“My dad bought 30 acres of grapes in the Central Valley – Tokaji – and tore them out,” he said with a smile. “They were table grapes with seeds, but they were really popular. Everyone had Tokajis, but my dad was from Texas, so he wanted cattle.”

Nick hopes the anticipated surgeries and additional time will allow him to return to the golf course. He’s no slave to technology though – evidenced by his 20th century flip phone – and he still plans to ride his tractor to help farm the 6-acre block they did not sell to the Austins.

“I can handle this, but 35 acres is quite a bit different now,” he said. “I loved riding the tractor. Loved it. I was in my own heaven. Remember, I was in the restaurant business for 20 years. That tractor was my couch. You do a lot of thinking out there.”