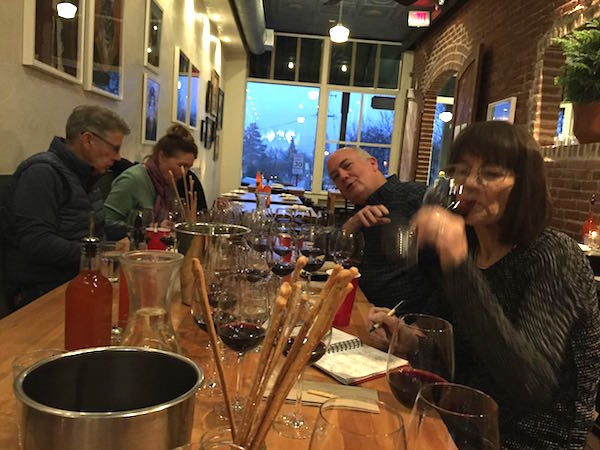 Four of the participants in the 2016 Judgment of Geyserville were, from left, Mike Dunne, Martha Dunne, Ron Washam and Ellen Landis. (Photo by Andy Perdue/Great Northwest Wine)

Thanks in large part to Australian wineries flooding the American market with overripe and inexpensive Shiraz, U.S. consumers have largely become bored with Syrah.

But that all changes when we find a Syrah grown in a cooler climate, in a region that allows the red grape to reveal its depth of flavor and complexity.

In search of great cool-climate Syrah, several top wine judges focused on this style for the third annual Judgment of Geyserville, a small, exclusive judging that takes place each January in California’s Sonoma County.

Each year, participants in the Judgment of Geyserville choose a theme, then select three examples each from various regions across North America. They then gather in early January at Diavola, an Italian restaurant on the main drag through the tiny community of Geyserville.

This year, the theme was cool-climate Syrah, and the judges found superb examples from up and down the West Coast. The judges and the regions they were responsible for were:

One of the most difficult tasks of this particular judging was defining what “cool climate” means. The participants decided that in this case, cool-climate Syrahs come from regions that have somewhat cooler and longer growing seasons but are still capable of reliably ripening Syrah grapes each vintage. For example, Syrah from the Yakima Valley region near Prosser and Grandview ripens as much as a month later than Red Mountain, which is just 20 miles to the east. One is a warm climate (Red Mountain), and one is a cool climate (Lower Yakima Valley).

The goal was to find examples of Syrah that were not big, rich and overripe. Rather, we hoped to taste Syrahs that showed complexity that goes well beyond the jammy, ripe flavors often found from inexpensive Aussie Shirazes or California Syrahs from hot areas such as Lodi or Paso Robles.

And find them we did. All 12 Syrahs showed beautifully, with none earning lower than a silver medal. The wines were tasted blind, meaning the judges didn’t know the winery or its region until after the competition was completed.

More on Judgment of Geyserville 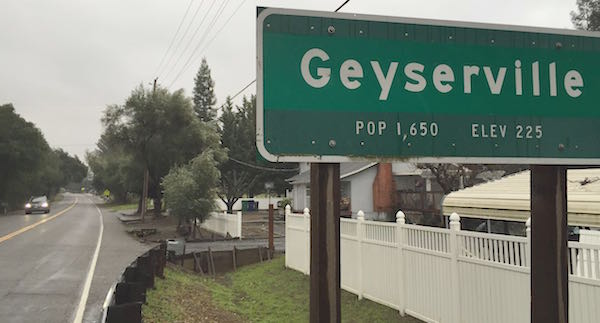 Want to read more perspectives on the Judgment of Geyserville?

Want to read about past Judgment of Geyserville tastings?

Here are the results of the 2016 Judgment of Geyserville. These are in the order of preference by the judges.

Drew 2013 Valenti Ranch Syrah, Mendocino Ridge, $45: The top-ranked wine in this year’s Judgment of Geyserville comes from an unusual area for California Syrah: the wild and decidedly cool Mendocino Coast north of Sonoma County. Aromas of plum, mushroom and mint lead to bright and lively flavors of beautifully focused red and purple fruit, all backed by mild tannins and zesty acidity. This is unmistakable as a complex and classic example of cool-climate Syrah.

Reustle-Prayer Rock Vineyards 2013 Winemaker’s Reserve Syrah, Umpqua Valley, $39: Stephen Reustle is not only representing Southern Oregon as one of its best winemakers, but also the entire West Coast. His 2012 Syrah earned Best New World Syrah at the prestigious Six Nations Wine Challenge in Australia, and is 2013 is showing marvelously already. it’s a rich and beautifully textured red with complex aromas and flavors of black licorice, caramel, black cherry and dark chocolate backed by moderate tannins.

C.C. Jentsch Cellars 2013 Syrah, Okanagan Valley, $30: Anyone familiar with British Columbia wines will have this winery near Oliver on their radars. This young producer won Platinum medals for both its 2012 and 2013 Syrahs last fall from Wine Press Northwest magazine. This opens with complex aromas of cured meat and teriyaki jerky, along with plum and spices. On the palate, flavors of crushed herbs, purple plum and blueberry are backed by dense and luscious tannins.

Ross Andrew Winery 2010 Boushey Vineyard Syrah, Columbia Valley, $40: This longtime Woodinville, Wash., winery uses grapes from perhaps the best Syrah vineyard in Washington, and it shows. Aromas of boysenberry, maple syrup and black pepper give way to flavors of brilliant fruit, including cranberry, black cherry and huckleberry. Though this is from a cooler vintage, the grapes got ample ripeness, thanks to the impeccable farming of grape grower Dick Boushey.

Palencia Winery 2012 Syrah, Yakima Valley, $30: Young winemaker Victor Palencia grew up in the Yakima Valley and brought in this Syrah from a vineyard just north of the town of Prosser, Wash. It is a beautiful and complex red with aromas of oak, red plum and a hint of horehound. On the palate, ripe red and black fruit meld with notes of coffee and dark chocolate. The tannins are intense without being overbearing, and the oak treatment is impressive.

Lagier Meredith 2013 Syrah, Mount Veeder, $48: The only wine this year from Napa Valley uses grapes from the rugged Mount Veeder AVA, a steep region that is cooled by nearby San Pablo Bay. This is an energetic Syrah with aromas of vanilla, prosciutto and blackberry, followed by flavors of bright purple fruit backed by dense tannins and mouth-watering acidity. This wine combines complexity with power, a delicious combination.

Abacela 2012 Barrel Select Syrah, Umpqua Valley, $30: Winemaker Andrew Wenzl used grapes from south-facing estate vineyards for this beautiful and brooding Syrah. Aromas of blackberry, purple plum and hints of oak lead to expressive flavors of mint, juicy Marionberry, anise and juniper berry. A late burst of firm tannins provide all the structure necessary to pair this with grilled meats or let this wine cellar for a half-decade or more.

Bunnell Family Cellars 2009 Boushey-McPherson Vineyard Syrah, Yakima Valley, $42: Ron Bunnell has established himself as one of Washington’s best winemakers, particularly with Rhône varieties, and he didn’t have to travel far from his Prosser winery to Boushey Vineyard in nearby Grandview for these grapes. Aromas of Hostess blackberry pie and cocoa powder give way to flavors of blackberry jam, caramel and vanilla. it’s all backed by modest tannins and rich midpalate viscosity. It’s an expressive example of cool-climate Syrah.

Nichol Vineyard 2012 Syrah, Okanagan Valley, $40: This longtime winery on the warm and remote Naramata Bench near Penticton, British Columbia, has long been producing world-class Syrahs. This example comes from grapes planted in 1990, making it the oldest Syrah vines in Canada. Aromas of grilled mushroom, roasted hazelnut and cured meat lead to flavors of plum and blackberry. This is a distinctive wine that reminded the judges of a top northern Rhône. It combines balance and complexity with wild and savory notes.

Vanessa Vineyard 2012 Syrah, Similkameen Valley, $39: It is rare to find wines from the remote Similkameen Valley, which is west of the Okanagan Valley in British Columbia’s Interior region. This is a classic cool-climate Syrah with aromas of wild mushroom risotto, dried herbs, jasmine and vanilla bean. On the palate, flavors of Marionberry and dusty black cherry are backed by juicy, fine-grained tannins. This will be fascinating to taste again in another half-decade.

Zerba Cellars 2012 Estate Syrah, Walla Walla Valley, $36: Using grapes from the new Rocks District of Milton-Freewater on the Oregon side of the Walla Walla Valley, this unveils some of the wild notes typical of this cool region that is most famous for Syrah. Aromas of mushroom, black raspberry and vanilla cream lead to flavors of huckleberry and moist earth. More than one judge picked this out as being from the Rocks District.