Scott Steingraber set to take Kriselle Cellars to next level 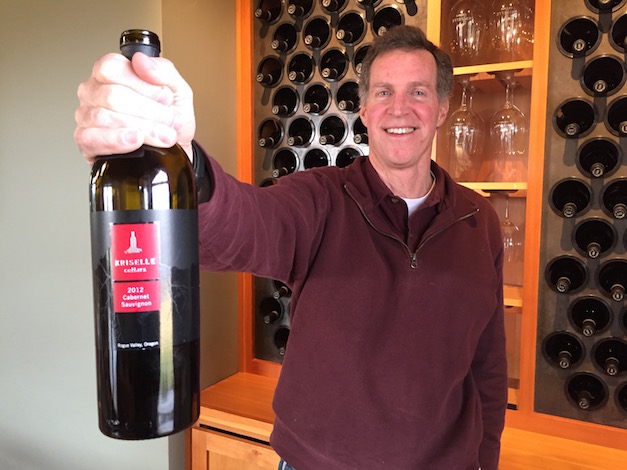 WHITE CITY, Ore. – Perhaps the most important talent of any winemaker is creating a long bridge from entry through midpalate and beyond the finish.

In his previous life, Southern Oregon vintner Scott Steingraber of Kriselle Cellars was one of the country’s most important bridge builders, the civil engineer who served as senior project manager for the 5,400-foot long Tacoma Narrows Bridge.

“I spent much of my time around the West – from California, up in Washington and Oregon – building large bridges,” Steingraber said. “My wife and I spent quite a few years moving around, including some time in the Bay Area, which gave us the opportunity to go to Napa and Sonoma, the interesting wine areas around Livermore, down in Paso (Robles), and really developed a love for wine.”

By the mid-1990s, he’d become infatuated with the industry.

“As bridge projects came and went, the one thing that I did find was that I would hone my skills on how to make wine – in the basement or garage of my houses,” he said. “I would make wine wherever I lived.”

His work for Bechtel Corp. led him to the Puget Sound, the nation’s longest suspension bridge project in four decades and a retrofit of the 1950 span, the bridge that replaced the terrifying Galloping Gertie collapse of 1940. Cost of Steingraber’s project came in at $849 million and spanned 4 1/2 years.

We recently caught up with Steingraber to learn more about his winemaking, the Rogue Valley, his pizza oven and the Oregon Tempranillo Celebration. 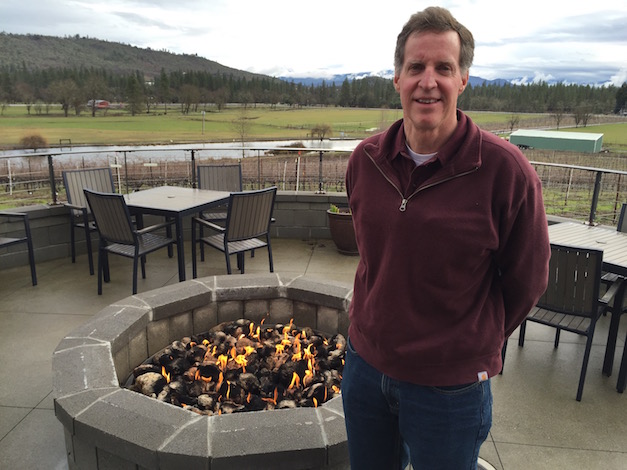 “I learned how they reacted, what we would get from them, and just had fun with it,” Steingraber said.

Toward the end of the Tacoma Narrows Project, Steingraber and his family purchased a 200-acre working ranch back in the Sams Valley near Medford, Ore. By 2006, they began to establish 25 acres of vines between the Rogue River and the majestic Table Rock formation. 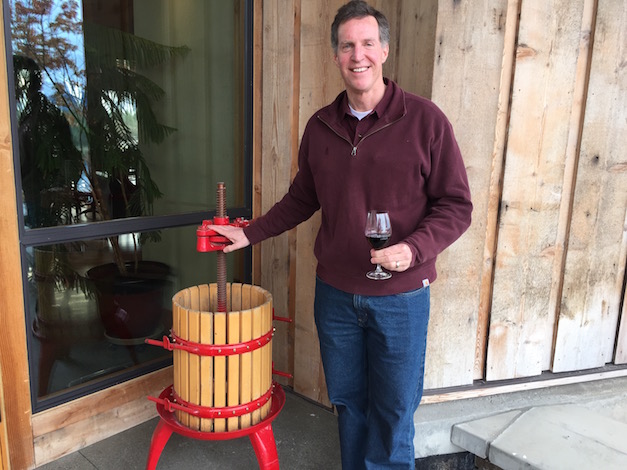 Scott Steingraber began to develop his interest in winemaking while working on bridge projects along the West Coast, including the Tacoma (Wash.) Narrows Bridge. The wine press displayed outside of his Kriselle Cellars tasting room is the first wine press he used as a home winemaker. (Photo by Eric Degerman/Great Northwest Wine)

A decade later, they grow a variety of grapes and have developed a following for their 4,000-case winery. Estate plantings include Cabernet Sauvignon, Cabernet Franc, Malbec, Tempranillo, Sangiovese, Sauvignon Blanc and Viognier.

“Every one of those varieties have their challenges, but Sauvignon Blanc and Tempranillo are really terrific varieties down here in Southern Oregon because of the large temperature swings that we have,” he said.

Among the fascinating features of Southern Oregon are the abundance of microclimates and the elevation change. For example, Steingraber’s vineyard in the Rogue Valley sits at 1,300 feet elevation.

“Ashland is a good 700 feet above where we are,” Steingraber said.

Among the wines Steingraber makes is a red blend called Di’tani – the Takelma tribal term for The Rock Above, a reference to the Table Rock basalt formation.

“We have cobbly, river rock soils where are vineyards are planted, which is where the Rogue River was,” Steingraber said. “It left us with this incredibly well-draining soil, which is a benefit to our wines, which tend to be more fruit-forward and show the characteristics of Southern Oregon.” 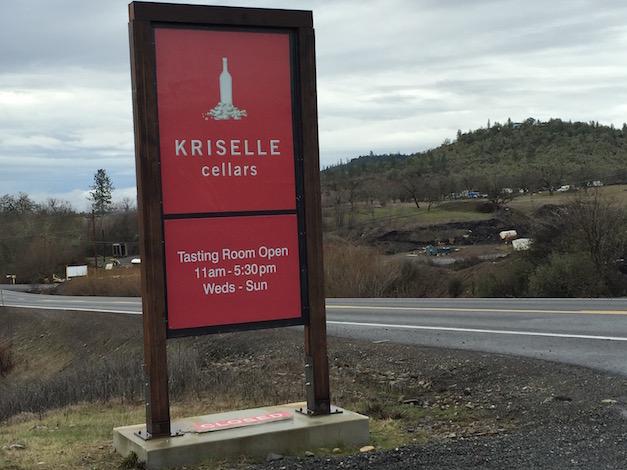 Table Rock Plateau looms in the background to the west of Kriselle Cellars, which was established 10 miles north of Medford (Ore.) Airport. (Photo by Eric Degerman/Great Northwest Wine)

He continues to champions the region and is among the four founders of the Oregon Tempranillo Alliance. The group staged its inaugural meeting during January in Ashland.

“To see what happened with 40 producers throughout the state of Oregon, coming together, sitting down and tasting through everybody throughout the state is doing was pretty incredible,” he said. “I think everybody really respected what we all are doing in the state. We learned from each other how to make great Tempranillo. It was a fun day for sure.

“You look at Tempranillo and the climate that we have in Southern Oregon and Eastern Washington, and even the interesting styles that came out of the Willamette Valley that you wouldn’t have expected,” he added. “Tempranillo has got a wonderful future ahead of it.” 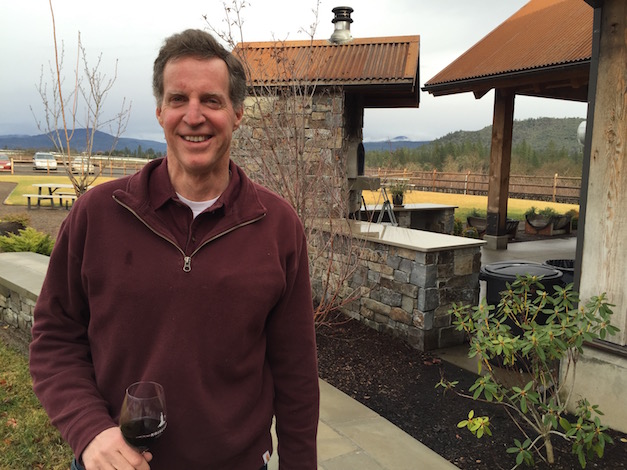 Scott Steingraber built a wood-fired oven and brings in a cook to prepare pizza as a complementary attraction for Kriselle Cellars in the Rogue Valley town of White City, Ore. (Photo by Eric Degerman/Great Northwest Wine)

Steingraber’s skill as a winemaker is reflected both with results in blind competitions and the commercial success at his 5,000-square-foot tasting room and wood-fired pizza oven in White City.

This week at the 2016 Cascadia Wine Competition, Kriselle Cellars merited a gold medal for its 2013 S/CS, a blend of Sangiovese and Cabernet Sauvignon as well as silver medals for the 2013 Tempranillo and 2013 Cabernet Sauvignon.

Kriselle Cellars began the competition season with a gold medal at the 2016 San Francisco Chronicle for its 2013 Di’tani.

“Most of our sales come right through our tasting room,” he said. “We’re not right in town, and we recognized that, so when we designed the tasting room we wanted it to be a place where people could come out, buy a bottle of wine, sit down and have the ability to have food with their wine. That’s how I really like wine – I like it with food.”

Their food-friendly pizza program is designed by Steingraber’s wife Krisell, whose unique name makes for an easy trademark of the winery.

“When her parents named her, they made up the name,” he said. “She had a lot of instances when people would mispronounce her name. We fixed that when we put an “e” on it and certainly clarified the brand.”

The next step for Kriselle Cellars is to expand its market beyond the region of Ashland, Medford, Klamath Falls and Grants Pass.

“This year, people will be able to find our wines in Portland and in Bend, and we’re going to be able to share what we’re doing in Southern Oregon with restaurants and small wine shops,” he said. “It’s certainly going to be an interesting year for us as we go forward with that plan.”