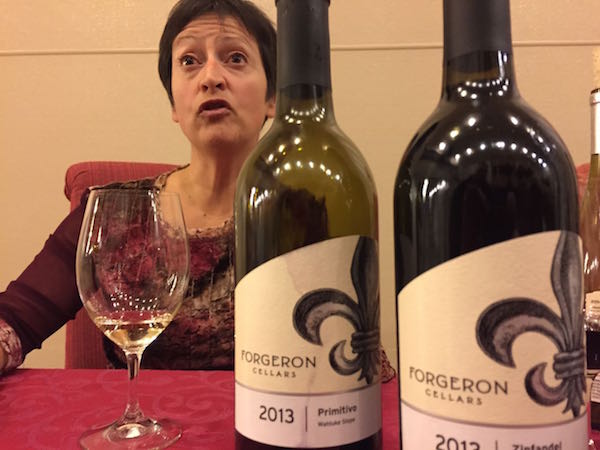 Marie-Eve Gilla is the winemaker and managing partner of Forgeron Cellars in Walla Walla, Wash. The winery, celebrating its 15th year, has unveiled a new look. (Photo by Andy Perdue/Great Northwest Wine)

WALLA WALLA, Wash. – One Walla Walla winery is marking its 15th year in business with a new look. Forgeron Cellars, which was the valley’s 23rd winery when it opened in 2001, is unveiling its makeover this weekend at Taste Washington.

Forgeron Cellars is run by Marie-Eve Gilla, winemaker and managing partner. The French native moved to Walla Walla after a decade of making wine for others in Washington and Oregon, setting up shop in a former blacksmith shop just a few blocks from the historic Marcus Whitman Hotel.

“All of us here at Forgeron are excited to start this new year with a fresh new look and feel,” Gilla said in a press release, adding that not all wines have the new look yet, but they will by the end of the year.

The centerpiece of Forgeron Cellars’ new look is a fleur-de-lis, which pays tribute to Gilla’s French roots. She grew up in Paris but spent a lot of time in Burgundy with relatives. She learned her winemaking education at the University of Dijon then worked in the Burgundy wine industry before coming to the United States.

Originally, she wanted to work in Oregon, naturally gravitating toward Pinot Noir – the primary red grape of Burgundy. But she came to Washington, met her future husband: fellow French expat Gilles Nicault, who today is the winemaker for famed Long Shadows Vintners in Walla Walla.

Gilla landed the head winemaking job at Gordon Brothers in Pasco, where she honed her craft for a few years before gathering investors to launch Forgeron Cellars in 2001.

In addition to the metal-hewn fleur-de-lis, Forgeron also has added the catchphrase “Washington Grapes, French Roots” – another nod to Gilla’s heritage.

Today, Forgeron Cellars makes about 8,000 cases of wine annually under three labels. In addition to its core “Forgeron” brand, Gilla also crafts high-end reserve-tier wines under her “Anvil” label. These wines are made in tiny lots and typically are not repeated in subsequent vintages. They tend to sell out quickly to wine club members and aficionados.

Her “Blacksmith” label is a value-priced line of wines popular with restaurants for by-the-glass selections.

Forgeron has two tasting rooms. The winery is at 33 W Birch St. in downtown Walla Walla, and the Woodinville tasting room is at 14344 Woodinville-Redmond Road.