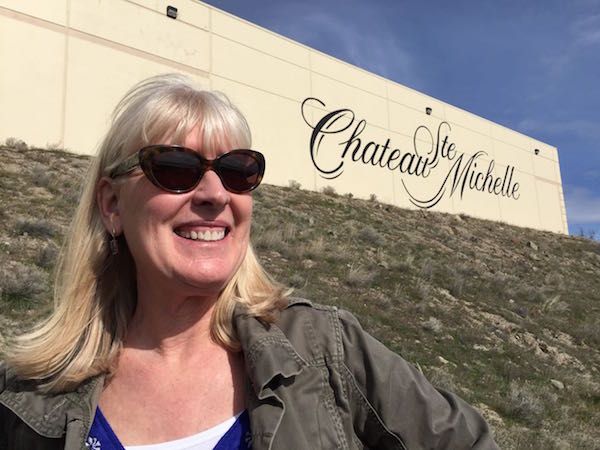 Mimi Nye has been the manager of Canoe Ridge Estate Vineyard since the first planting began in 1991. She is retiring after more than 30 years with Ste. Michelle Wine Estates. (Photo by Andy Perdue/Great Northwest Wine)

PATERSON, Wash. – After more than 30 years of farming in Washington’s Horse Heaven Hills, grape grower Mimi Nye is hanging up her pruning shears and calling it a career.

Nye, has been the only vineyard manager in the 25-year history of Canoe Ridge Estate Vineyard, a 600-acre site overlooking the Columbia River that has been a bedrock for many of Chateau Ste. Michelle’s best wines.

Nye, who has lived in a house on the vineyard nearly her entire time since the vines were first planted in 1991, feels protective of the nearly half-million vines in the sandy soil that rises up from the edge of the Columbia River.

“These are my babies,” she said affectionately. “I feel protective of them.”

Nye, a city girl who had no farming experience when she began attending the University of Washington in the early 1970s, now cannot imagine living anywhere but in wide-open spaces. She and her husband will move to a 2-acre property overlooking the Columbia River near Umatilla, Ore.

“I’m not planting grapes,” she said quickly. “Maybe a pot of flowers.”

Taking over as Canoe Ridge Estate vineyard manager is Kari Smasne, who has worked for Ste. Michelle Wine Estates since 2006. She most recently worked at the company’s Cold Creek and Col Solare vineyards. Smasne’s husband is part of the Smasne family that has farmed grapes and made wine in the Yakima Valley for several decades.

Nye has agreed to stay on for a year as needed.

“I will continue to do a little consulting to check in and get the new manager through the first season,” she said. “She should do fine without me, but I’m happy to come out and offer my insights into what’s going on in the vineyard.”

And Nye’s insights should be immense, as she has overseen the planting of every single vine at Canoe Ridge Estate.

From Seattle to Paterson 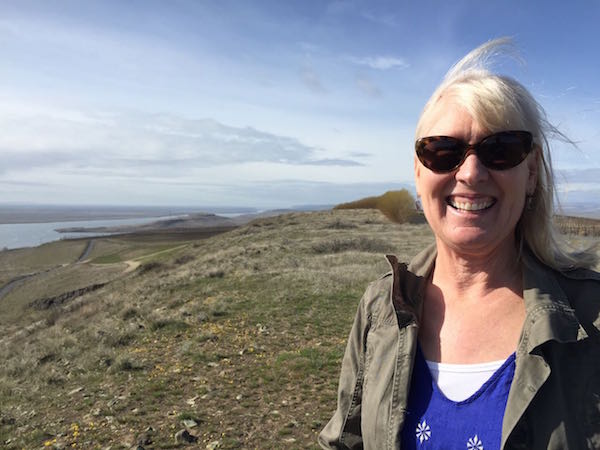 Mimi Nye grew up in Seattle but spent her entire career farming in the Horse Heaven Hills of Eastern Washington. (Photo by Andy Perdue/Great Northwest Wine)

Nye grew up in Seattle yet felt a little lost when she arrived at the University of Washington to begin classes. She believed she would eventually figure it out after she started classes, but that came slowly.

Then she took a greenhouse class.

“They don’t have a horticulture department at UW,” she said. “They have forestry. It was a fun class, and I just fell in love with horticulture.”

So Nye transferred to Washington State University and moved across the state to major in horticulture. After college, she went to work for Columbia River Farms, a potato farm near Paterson, where she spent two years before taking a research technician job at the WSU research station in Prosser. While she was there, she happened to house sit for none other than Walter Clore, who was going to Japan for several weeks with his wife. Clore is known as “the father of Washington wine.”

The research position was enjoyable, but Nye wanted to get back to getting her hands dirty, so she was rehired at Columbia River Farms, which by this time was owned by Chateau Ste. Michelle.

“It was a 10,000-acre farm, and they only put in a couple thousand acres of grapes (where Columbia Crest now is),” she said. “So the rest of it was still being farmed.”

The rest of that farm eventually was sold by Ste. Michelle, which had little interest in growing anything but grapes.

A decade later, the company began to look at planting Canoe Ridge Estate, a site downriver from Columbia Crest that was recommended by Clore, who by that time was retired from WSU and was a consultant for Ste. Michelle.

“It never occurred to me to apply for the job because I’d never grown grapes before,” she said.

But a manager with the company called and asked her to consider the position. 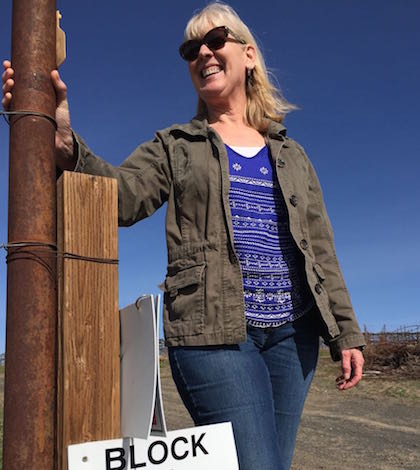 As Nye pondered the idea of becoming Canoe Ridge Estate’s first vineyard manager, she happened to read a passage in the Old Testament that inspired her. Proverbs 31 speaks of a virtuous woman and all the things she does.

“She’s a businesswoman, and it says, ‘And with her profits, she plants a vineyard and her arms are strong for her work.’ And I thought, ‘Wow. If a Jewish lady 2,700 years ago could plant a vineyard, then so could I,’ She was my inspiration,” Nye said. “I just feel like I’m meant to be here. When I started, it was good to have confidence that this is what I was supposed to do – and that I could do it.”

But she still didn’t know how to grow grapes, and she got additional pressure when her boss, Rich Wheeler, told her that Canoe Ridge Estate had the potential to be world class. Nye wasn’t sure how to quantify “world class,” but she told Wheeler that when one of the Canoe Ridge Estate wines made the Wine Spectator’s top 100 list, they would know.

“Three different varieties from this vineyard,” she said with a smile. “There might be another vineyard in the world that’s done that, but I don’t know.”

And Nye deserves at least partial credit for the Tenet Wines 2013 Syrah, which last year also made the Spectator top 100. A third of the grapes for that wine came from Canoe Ridge Estate.

Living at the vineyard for the past 23 years has had its advantages, Nye said, particularly the short commute to work and her ability to jump into any issue immediately. The downside, of course, is the 35-mile drive to the grocery store in Hermiston, Ore.

Why Canoe Ridge Estate is special 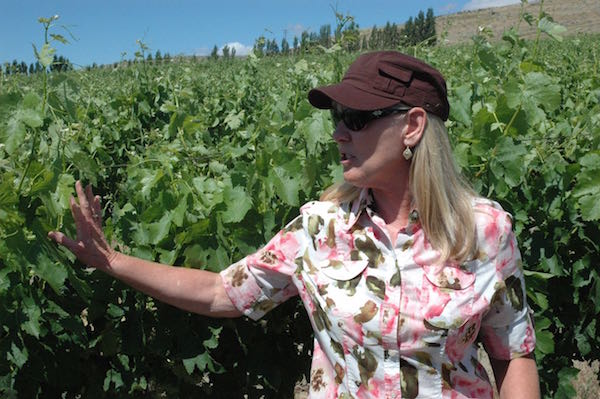 For the past 25 years, Mimi Nye has been very protective of the nearly half-million vines planted at Canoe Ridge Estate Vineyard in Washington’s Horse Heaven Hills. Now she is retiring from Ste. Michelle Wine Estates. (Photo by Andy Perdue/Great Northwest Wine)

Nye recalls the winter of 1996 well. That was the year that a historic cold front froze nearly half the vineyards in Washington. The nights were cold and clear, and temperatures were expected to reach minus-15 for three nights in a row. The state wine industry was braced for a disaster that arrived across the Columbia Valley.

But at Canoe Ridge Estate, Nye watched the temperature hit zero – then start to get warmer. A miracle fog had come off the Columbia River and enveloped the vines, protecting them from devastation. It happened three nights in a row, and Canoe Ridge Estate was spared. In fact, Nye has lost almost no vines to weather or disease in 25 years.

In addition to the weather, the soils here are different than many other places. They are sandy, lighter-textured soils than what are found the farther north one travels into the Horse Heaven Hills. This is a result of the Ice Age floods some 15,000 years ago that dropped coarse sand close to the river and left fine, powdery soils farther away.

As a result, the vineyards on these ridges – Canoe, Zephyr and Destiny in particular – produce wine of elegance rather than power.

In fact, early in her career at Canoe Ridge Estate, Nye tried to grow grapes that were similar to the company’s other important estate vineyard, Cold Creek north of the Yakima Valley.

“I feel myself competing with Cold Creek,” she said with a grin. “I want our vineyard to be better.”

So early on, she tried to grow grapes that tasted like Cold Creek. She stressed the vines, removed more leaves and tried other techniques that she thought would provide the richness and depth of Cold Creek. But Canoe Ridge is built for elegance, and she finally accepted that.

“It doesn’t matter what I do,” she said. “They will never taste like Cold Creek. They’re just different. Cold Creek is really big and bold and rich and concentrated. Canoe Ridge is more subtle, more elegant. It doesn’t mean it’s weak. None of the components are shouting out the others.”

Nye, honored as 2016 Grower of the Year in February by the Washington Association of Wine Grape Growers, leaves a legacy of hard work and greatness. For that, Ste. Michelle is grateful.

“Mimi embodies everything that we desire in employees,” said Ted Baseler, president and CEO of Ste. Michelle Wine Estates. “She is so dedicated and passionate about the vineyard. She’s a special person. We will miss her greatly. She is world class.”