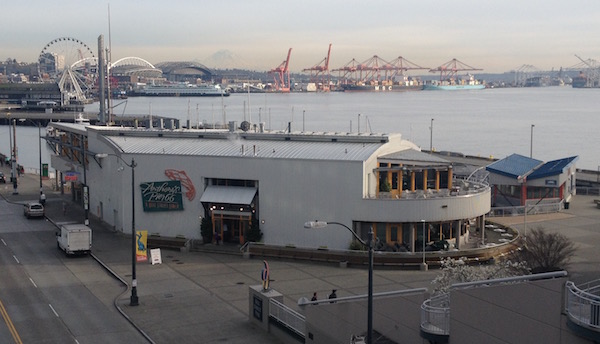 Anthony’s at Pier 66 is among the 165 restaurants in King County taking part in Seattle Restaurant Week, which runs Sunday through Thursday on April 10-14 and April 17-21. (Photo by Eric Degerman/Great Northwest Wine)

SEATTLE – It’s become a tradition unlike any other that Seattle Restaurant Week follows on the heels of Taste Washington and Washington Wine Month.

For the eighth straight year, many of Seattle’s finest restaurants and a number in the King County suburbs offer some delicious deals on special prix fixe dinners Monday through Thursday and then again April 17-21.

And nearly half of the 165 participating culinary destinations throughout the Puget Sound extend the prix fixe discounts to lunch, too.

A three-course dinner is $30. Those restaurants offering the two-course lunch option will charge just $15. Both prices make pairing a meal with a regional wine quite easy.

Geographically, those involved in Seattle Restaurant Week range from Salt & Iron in Edmonds to the north, Salish Lodge in Snoqualmie to the east and Salty’s at Redondo Beach to the south. Participating restaurants with a history of strong support for the Washington wine industry include:

There are 14 participating restaurants that offer vegan items.

Each day, visitors to the promotion’s website can enter for a shot at one of the $50 gift certificates given away daily that are good at one of the Seattle Restaurant Week participants. Follow the promotion on Twitter at @SeattleRW and Facebook.

Visit the SeattleRestaurantWeek site and click on each restaurant to see what the prix fixe options are. The popularity of this 10-day promotion should prompt patrons to seek reservations, and many are available via site’s link to OpenTable.com.

If neither business nor pleasure don’t have you in King County during the next two weeks, Seattle Restaurant Week returns for another 10-day split engagement during the latter half of October.