The sale was made public Tuesday morning. Terms of the sale were not announced.

Patz & Hall, based in the city of Sonoma, began in 1988 and is well known for its Pinot Noirs and Chardonnays from various Sonoma County regions. It was created by James Hall and Donald Patz when both worked at Flora Springs Winery and Vineyards in the Napa Valley city of St. Helena.

Ted Baseler, CEO of Ste. Michelle Wine Estates, said his company had quietly been looking to buy a winery in Sonoma County, primarily based on feedback from retail and wholesale customers.

“They were asking us to broaden our portfolio,” Baseler told Great Northwest Wine. “It had a conspicuous hole, and our customers want a full-service wine company. We’re more than pleased to facilitate their desires.”

With the purchase of Patz & Hall, Ste. Michelle now owns wineries in all of the most significant regions of each West Coast state. It owns such properties as Chateau Ste. Michelle, 14 Hands, Columbia Crest, Spring Valley and Northstar in Washington; Erath in Oregon’s Willamette Valley; and Conn Creek and Villa Mt. Eden in Napa Valley. It also co-owns Col Solare in Washington and Stag’s Leap Wine Cellars in Napa Valley with Marchesi Antinori of Italy.

Since purchasing Stag’s Leap Wine Cellars in 2007, Ste. Michelle’s strategy has been to pursue partnerships rather than acquisitions. In recent years, the Woodinville company has entered into agreements to import and distribute such top global brands as Antinori (Italy), Torres (Spain), Champagne Nicolas Feuillatte (France) and Villa Maria (New Zealand).

It also has created such Washington brands as 14 Hands, Seven Falls, Intrinsic, Drumheller and Anew. A year ago, it created Tenet Wines, a collaboration with two French winemakers.

Patz said in a news release that he had no intentions of selling the winery until being approached by Ste. Michelle.

“The more we got to know the people of Ste. Michelle, the more impressed we were,” he said. “Its wineries are pioneers and leaders in their respective regions throughout the world. They understand a winery like ours, and they know how to preserve what makes it special.” 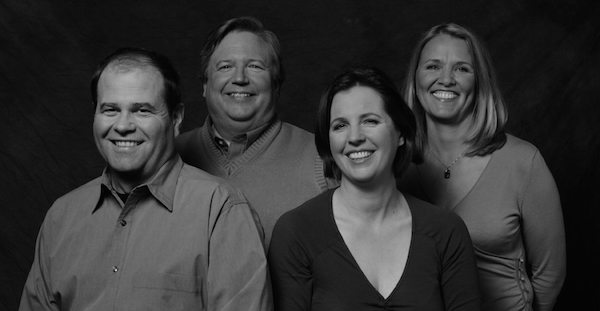 The four partners of Patz & Hall are, from left: James Hall, Donald Patz, Anne Moses and Heather Patz. The four will all remain with the winery. (Photo courtesy of Patz & Hall)

Baseler said Patz & Hall was at the top of his list when he began considering buying a Sonoma County winery.

“They have considerable clout here in California,” he said after tasting through barrels of 2015 Patz & Hall Pinot Noirs on Tuesday afternoon. “Their wines are highly desirable, and they have a handle on Sonoma County fruit.”

“The timing of it is kind of funny,” Baseler said.

He added that purchasing a 35,000-case winery focused on Pinot Noir and Chardonnay should not interfere with the growth of Erath Winery in Dundee, Ore., which Ste. Michelle bought in 2006.

He also has no qualms about distributing Patz & Hall wines in the Northwest.

“Patz & Hall has good distribution in Washington,” Baseler said. “In six months, it will be better.” 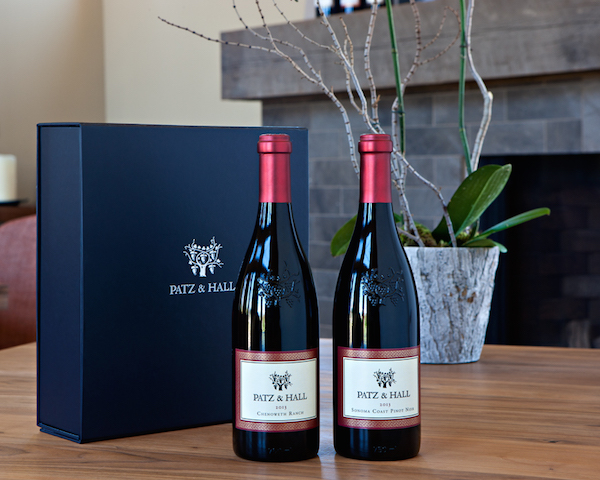 Baseler added that the Patz & Hall purchase should only help strengthen his Washington wines.

“What we find is that every time we add something special, whether it’s Stag’s Leap or now Patz & Hall, it gives a turbo charger for Washington wines. It puts them in world-class company,” Baseler said. “I know our distributors are very excited about this. I think it will elevate all of Ste. Michelle’s portfolio. We’re proud to add it to our String of Pearls.”

Baseler refers to his entire portfolio of wines as the company’s “String of Pearls,” and Ste. Michelle is precise about working with the best wineries and brands around the world to increase its visibility.

“The premise is always that we will be quite particular,” he said. “We look at things all the time. We are very patient – I’m accused of being too patient. A lot of wine companies specialize in buying what nobody wants. We want an outstanding fit for us.”

Wilfred Wong, chief storyteller for online retailer Wine.com, was surprised to hear the news on Tuesday morning and thought it was a bold move for Ste. Michelle.

“Patz & Hall uses the entire Sonoma County region well,” he said. “Its best wines are the single-vineyard Pinot Noirs, which are at a really high level.”

Wong describes Patz & Hall as a well-respected brand that is strong with Bay Area wine lovers.