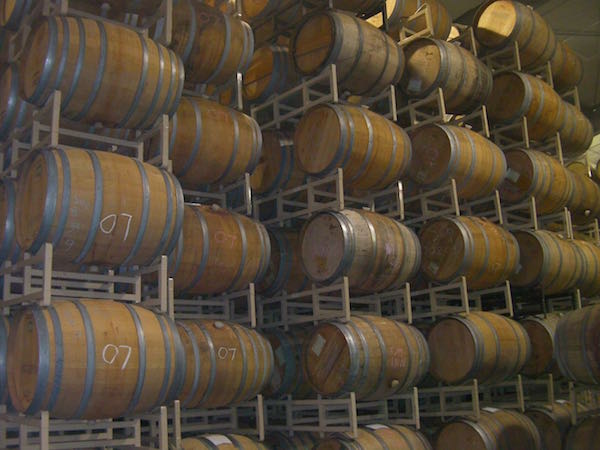 Barrels, whether new or used, are a big part of the cost of producing red wine. The barrels are expensive, and they take up a lot of space. (Photo by Andy Perdue/Great Northwest Wine)

When looking at affordable red wines, there are two considerations: sub-premium box and jug wines typically produced in California and premium wines at less than $15 per bottle.

The vast majority of California jug wine is made from grapes grown in high quantity (more than 10 tons per acre) in the arid Central Valley. In the Pacific Northwest, it’s virtually impossible to grow grapes at that level, so the focus here is on higher quality, similar to such California regions as Napa, Sonoma, the Central Coast and the Sierra Foothills.

It is not unusual to hear about red wine grapes being cropped to two to four tons per acre. Depending on the region, such grapes will cost upward of $1,500 per ton for Cabernet Sauvignon. There’s simply little way to make a value premium wine with those numbers.

But when a “production vineyard” is used on, say, Washington’s Wahluke Slope, tonnage per acre can rise to six, and the grapes can be sold for much less (often less than $1,000 per ton). A winemaker usually gets about 60 cases of wine per ton of red grapes, so the cost per bottle begins to drop dramatically when the price per ton drops below $1,000.

Other factors for the cost of making the wine include: barrels (new or used), winemaking salaries, packaging, marketing and shipping. One somewhat hidden cost is that the wine typically isn’t released until two years after harvest, and that’s a lot of inventory demanding space and labor.

Here are a dozen delicious and affordable Northwest red wines, all priced at $15 or less.