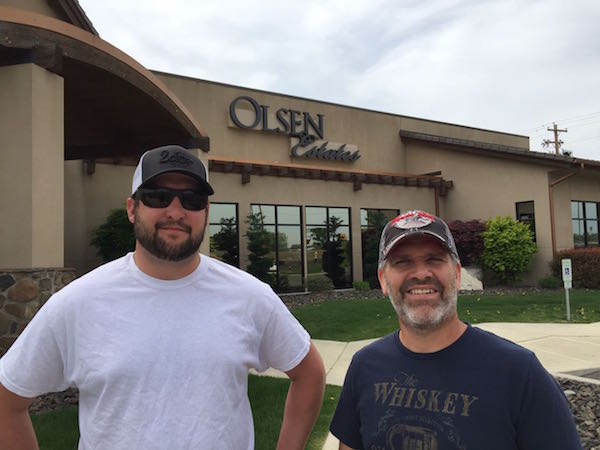 Sean Tudor, left, and Robert Smasne have purchased the former Olsen Estates winery in the Vintners Village in Prosser, Wash. They plan to open to the public in June. (Photo by Andy Perdue/Great Northwest Wine)

PROSSER, Wash. – A winery that has stood empty for a half-decade has new owners.

Robert Smasne of Smasne Cellars and Sean Tudor of 2dor Wines have purchased the former Olsen Estates in the Vintners Village in Prosser. They also bought the lot just to the east of the facility, an area currently covered in grass.

“We both believe in the Yakima Valley,” Smasne told Great Northwest Wine. “To have a home base here is really key for us.”

Smasne’s winemaking career began in 1998 when he worked for Covey Run. More than a decade ago, he launched his own winery and has built it up ever since.

Tudor and his father purchased historic Otis Vineyards north of the Yakima Valley town of Grandview in late 2013. With it comes the oldest Cabernet Sauvignon vines in the state, planted by Otis Harlan in 1957.

The 12,000-square-foot winery has been for sale since the Olsen family shuttered its business in 2011 to focus exclusively on wine grape growing. The highly respected farming family built the winery in 2006. The recession that began a year later turned out to be ill timed for the Olsens, who produced delicious wines with winemaker Kyle Johnson during their few years in the business.

Smasne said he’s excited about moving into the facility, which will serve as a tasting room and production facility. Smasne and Tudor hope to have the tasting room open by mid-June and to have all the paperwork in place in time for harvest in September.

With Interstate 82 less than 100 yards away, the winery is one of the most visible in Washington. Every car that passes east toward Red Mountain, the Tri-Cities and Walla Walla drives right past it. And even though the building has been closed for a half-decade, many visitors still stop by. Smasne said last week that on his first day of ownership, a couple stopped in to taste – even though no wines were available.

Owners of nearby wineries – several are within walking distance in the Vintners Village – said they are thrilled to hear the winery has new owners, as it will only help draw more visitors to the area. 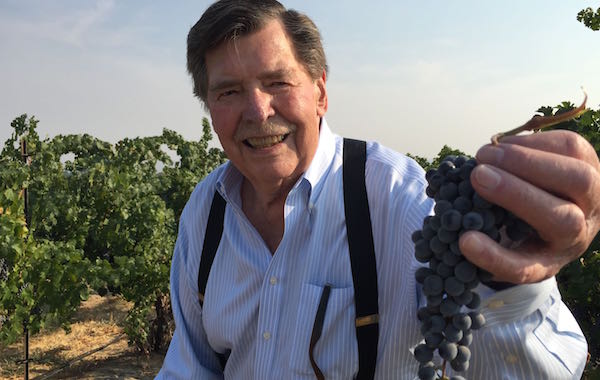 Otis Harlan was a pioneer in the early Washington wine industry, running Otis Vineyard in the Yakima Valley and selling top-quality grapes to the likes of David Lake of Columbia Winery. Today, Harlan is retired and living in Yakima, Wash. He sold his vineyard in late 2013. (Photo by Andy Perdue/Great Northwest Wine)

All three families have long histories in the Yakima Valley. The Smasnes have been farming here for more than 100 years, with Robert Smasne part of the fourth generation.

The Olsens go back to at least 1908 and today farm more than 2,500 acres of crops here, including more than 800 acres of wine grapes, a crop they have been growing since 1980.

The Tudors arrived in 1970, with Andy Tudor – Sean’s grandfather – as head winemaker for Boordy Vineyards. Andy Tudor died in a work-related accident in the 1970s. The Tudor family has been in the wine industry since the 1940s, going back to its days in Southern California.

These connections helped bring about the sale of the building. Smasne mentioned that he was close to buying the building a couple of years ago, but the two families couldn’t quite come to an agreement. Early this year, Smasne’s father ran into a member of the Olsen family in town, and the two got to talking. Then Tudor suggested a partnership, and that got the deal moving.

About two months ago, the Smasne, 43, and Tudor, 29, made an offer. They got the keys to the building last week.

“This fulfills what my grandfather started,” Tudor said. “My whole family is excited and proud. I know my grandpa was smiling down on us when we were signing the papers.”

For Smasne, the location is convenient because he lives in Prosser. For Tudor, he’s about four miles from Otis Vineyards to the winery.

Smasne also has custom winemaking clients, including highly regarded Northwest Cellars in Kirkland. All of the production will move to the new facility. Smasne Cellars is about 3,000 cases, and Smasne also owns Farm Boy and Farm Girl Wines, both of which are a few thousand cases.

Smasne also makes the wine for 2dor Wines, which launched with the 2014 vintage. So far, white and rosé wines have been released, but the first vintage of reds was bottled a few weeks ago. Next year, the 2dor 2014 Cabernet Sauvignon from the 1957 vines will be released on the 60th anniversary of the vines being planted. 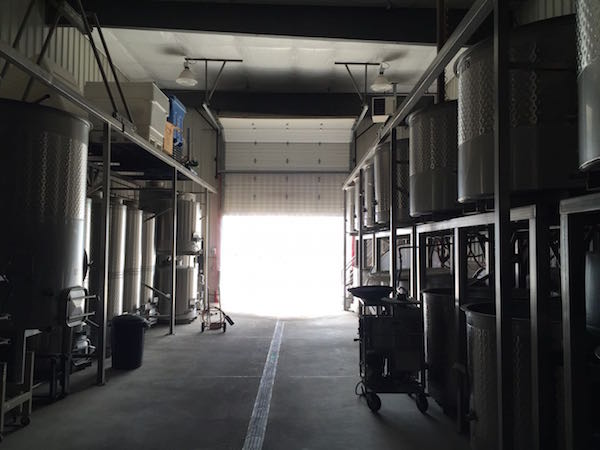 Until earlier this spring, Smasne had a tasting room in Kennewick. He closed that when his lease came up in March in anticipation of partnering with Tudor to buy the Olsen building. He also has a tasting room in the Woodinville Warehouse District.

“It’s amazing how many people have contacted us,” Smasne said of the building purchase. “They’re just so thankful that someone is going to come in and open this again.”

He mentioned that some of the winemaking equipment duplicates what he already owns, so he plans to sell some of it.

“Some wineries are going to benefit because we’re going to sell off some of this hardly used equipment,” he said.

Tudor said the location of the facility is so close to his vineyard that it will be easy to provide tours to wine club members and other visitors who are interested in seeing some of the state’s oldest vines.