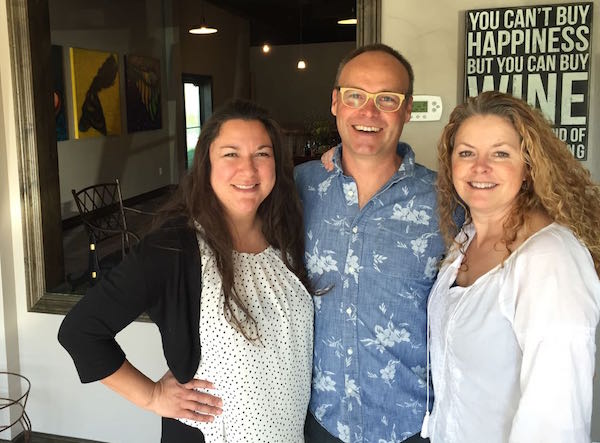 Cat Warwick, left, Flint Nelson and Gina Adams-Royer are the owners of Wit Cellars. The new Prosser, Wash., winery will open the weekend of May 7. (Photo by Andy Perdue/Great Northwest Wine)

PROSSER, Wash. – Washington’s newest winery opens its doors May 7 in the cradle of the state’s wine industry.

In many ways, Wit Cellars has come together remarkably fast – from an idea last summer to 1,300 cases of production next week.

But in other ways, the winery owned by Flint Nelson, Carolina “Cat” Warwick and Gina Adams-Royer has been a quarter-century in the making.

Wit Cellars is at 2880 Lee Road, Suite A, not far from such wineries as Hogue Cellars, Alexandria Nicole Cellars and Mercer Estates.

All three of the Wit Cellars owners worked for nearby Kestrel Vintners for several years – Nelson was the head winemaker there for a dozen, and Warwick worked in various capacities for seven. Last summer and fall, they parted company with the winery, and it was just in time to buy some grapes and make some wine.

When Wit Cellars opens May 7, the three will be pouring eight wines – a remarkable amount for a winery that didn’t exist until last fall’s harvest. And they have managed to get into some of Washington’s top vineyards, including Evergreen, Olsen, Elephant Mountain and Gamache.

The trio sees this entire odyssey as part of the good karma that flows through the genial Washington wine industry.

“In every aspect – from offering goods and supplies and money and space – it’s been remarkable,” Nelson told Great Northwest Wine. “Everyone has helped.”

Nine months ago, Nelson was at, well, wit’s end. He was burned out and wishing he wasn’t in the wine industry. Not good for someone who’s been at it for as long as he has. But the journey of creating Wit Cellars and seeing how so many have surrounded the little winery has brought back his trademark smile.

“It’s completely come back,” he said. “It’s restored my faith in the wine industry. I have to admit, I was feeling a bit down on the whole thing and wishing I’d made a different career choice. But everything that’s happened in the last six months has made me really proud and happy to be where I’m at again.”

From WSU to Wit Cellars 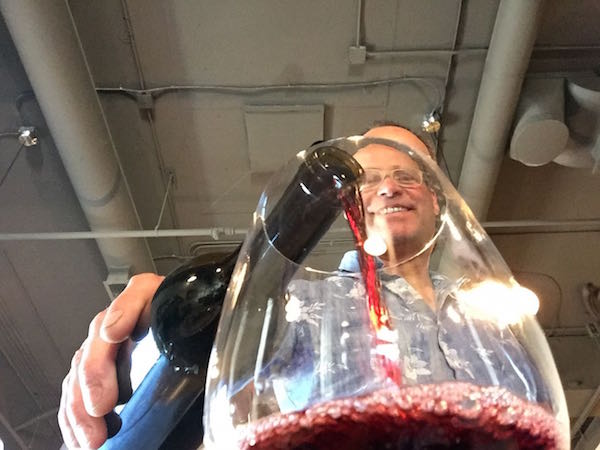 Winemaker Flint Nelson pours a glass of Cabernet Sauvignon from Wit Cellars. Nelson has been a Washington winemaker for 25 years. (Photo by Andy Perdue/Great Northwest Wine)

Nelson’s journey as a winemaker began in 1991 when he graduated from Washington State University with a degree in food science and horticulture. From Pullman, he landed a job at Columbia Crest, where he worked for Joy Andersen, the longtime winemaker who oversees Snoqualmie Winery for Ste. Michelle Wine Estates.

From there, he worked at Hogue Cellars for four years, learning from such winemakers as David Forsyth and Rob Griffin. Then he went to Paul Thomas Wines, where he worked with David Lake and Dave Crippen. Then he worked alongside Brian Carter at Apex Cellars before landing at Kestrel Vintners.

Warwick got her start at Apex Cellars, working in hospitality before catching the winemaking bug. She worked there for several years until Owen Roe took over the Apex facility in Sunnyside. There, she worked in every department from human resources to the cellar. Near the end of her stay there, she was named associate winemaker.

During her stay at Owen Roe, she began taking night classes at Yakima Valley Community College to earn a winemaking degree. She was the first graduate of the program in 2009.

From there, she went to Kestrel, where she again worked in every job she was asked to perform. Ultimately, Warwick landed in the cellar as Nelson’s assistant winemaker.

“We’ve been working closely together for almost four years,” Warwick said. “We’re a pretty good team. We do whatever it takes.”

Adams-Royer landed at Kestrel in 2012 working retail and helped run the winery’s tasting rooms in Prosser, Leavenworth and Woodinville.

Now the three have teamed up to create Wit Cellars – and it doesn’t look like anything can stop them. 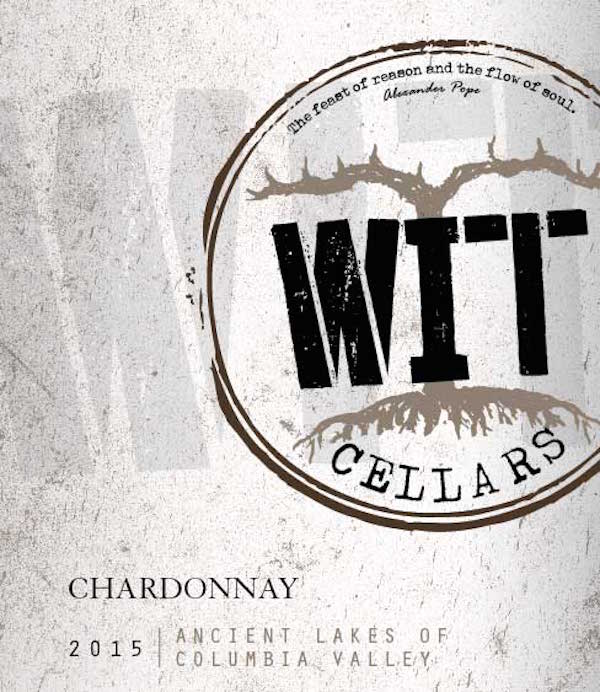 When the trio decided to create Wit Cellars, the pieces quickly fell into place. Grapes became available from top vineyards. Investors showed up to help in any way the could. Friends and family pitched in.

Their 1,100-square-foot tasting room is now equipped with a bar that Nelson created from scratch. It features barrel staves and a concrete top.

They came up with the name “Wit Cellars” as an acronym for “Whatever It Takes,” and that is their attitude for getting the winery launched. In fact, all three have fulltime jobs to make ends meet until they start selling wine.

Nelson teaches winemaking at YVCC. Warwick works full time at Owen Roe’s tasting room up the valley in Wapato. And Adams-Royer works for Wine O’Clock, a tasting room and restaurant on the other side of Prosser.

And they all have families. Warwick has three children and is going to college full time to earn her bachelor’s degree. Nelson’s wife, Katie, is a winemaker for Charles Smith Wines, and the two have young children. Adams-Royer and her husband, a U.S. Marine who has served three deployments, have four children.

Whatever it takes, indeed.

“I hope that in a year, my life isn’t so crazy,” Nelson said with a laugh.

Regardless, the three know they will be successful at this venture. After making an announcement on Facebook in late March, more than 50 people signed up to be in the wine club – without ever tasting a drop.

When they open, their Wit Cellars wines will include: Chardonnay, Riesling, Pinot Gris, a rosé, Cabernet Sauvignon and a red blend. They’ll also be releasing under Nelson’s separate Mazzacano Cellars label a Grenache and another red blend. Prices will range from $17 to $40.

Most of their wine will be sold directly to consumers, though the three will likely distribute small amounts to wine shops and restaurants as needed.

They also already are planning a second tasting room in Woodinville. Though details have to be ironed out, they foresee this happening in the not-too-distant future.

And if that happens, “We can sell all the wine we need to support ourselves,” Nelson said. “We’ll never be rich, but we’ll be happy.”