Seattle’s Precept debuts West Side Wine – in a can 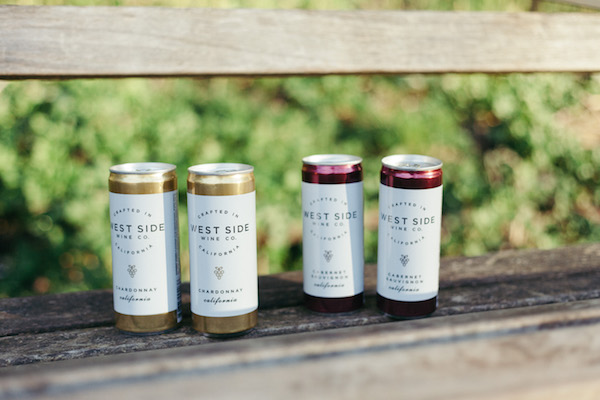 West Side Wines is a new wine in a can from Precept Wine in Seattle. It debuted last week across the country. (Photo courtesy of Precept Wine)

SEATTLE – Washington’s second-largest wine producer is making the state’s first wine in a can.

On Friday, Precept Wine unveiled West Side Wine Co., a wine brand packaged in an 8.6-ounce can. For the launch, Precept produced Cabernet Sauvignon and Chardonnay using grapes from California.

This isn’t the first canned wine in the Pacific Northwest. Two years ago, Union Wine Co. in Oregon began putting Pinot Noir in a can in its Underwood label. Last year, Split Rail Wines in Garden City, Idaho, packaged red and white wines in cans under its Strange Folks label.

“Underwood has blazed a trail,” Evans said. “The category hasn’t really been defined yet.”

Precept Wine’s new package has come together quickly. In January, after the company understood that Whole Foods Market and HMSHost were interested in a wine in a can, it got to work, launching four months later.

“That’s how we roll,” she said with a laugh.

West Side’s name and packaging were all developed by Precept’s in-house team. The name refers to the west side of the United States. Precept looked at similar packaging for such beverages as energy drinks, coffee and sports drinks.

With the launch of West Side, the wines are available in all Whole Foods in the United States that carry alcoholic beverages.

“They’re putting a lot of energy behind it,”Evans said.

Of equal excitement for Precept is its partnership with HMSHost, which provides food at more than 120 airports worldwide. For the launch, HMSHost is serving the West Side cans in seven airports: San Francisco, Los Angeles, San Diego, Las Vegas, Chicago, Nashville and Charlotte. Its plan is to continue to roll it out to more airports nationally.

Precept reported that at least airline already has contacted it about perhaps providing the canned wines for in-flight service, since aluminum is lighter than glass.

West Side Wine from California 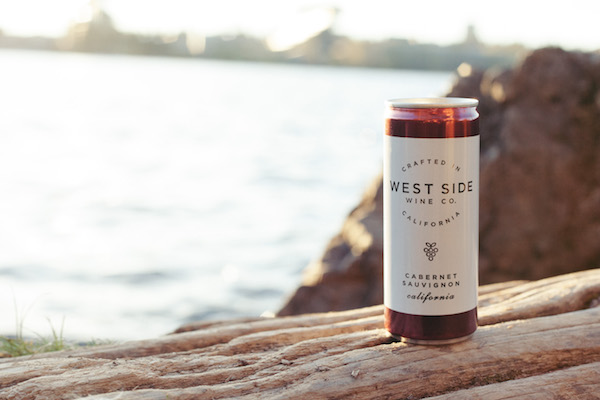 West Side Wine has Cabernet Sauvignon and Chardonnay for its debut. Both use grapes from California. (Photo courtesy of Precept Wine)

Precept Wine is based in Washington, and its focus is on Northwest wine, with significant wine production in Washington, Oregon and Idaho. Its wineries include Waterbrook, Canoe Ridge, Windy Bay, House Wine, Brown Family, Ste. Chapelle and Sawtooth. In 2014, it purchased Gruet, the famed New Mexico sparkling wine house.

But it also has brands in Australia and has projects in Italy, France and South America.

The company decided to go to California for the grapes in West Side Wine in part to fit the theme of the brand. The grapes come from several American Viticultural Areas, with a large percentage from the vast Central Valley.

She said using Washington grapes for this first release wasn’t feasible because the cost to produce it would have been a couple of price points higher than what Precept was able to do with California wines. She added that Hal Landvoigt, Precept’s director of winemaking, was heavily involved in selecting and blending the West Side wines.

Precept made the equivalent of 11,000 cases of West Side for its first run. In traditional bottles, a case is 9 liters. But with the cans, it is six four-packs – or 6 liters. Each four-pack retails for about $15.

“We’ll find the threshold,” she said. “You’ll see more from us in this space. If consumers have a good reaction, we’ll continue to innovate.”

She added that the 8.6-ounce size is about a glass-and-a-half of wine, a good amount for someone who doesn’t want to overconsume.

Precept is planning promotions in target markets, including Seattle, Portland and Austin, Texas. This weekend, it will be at Filmed by Bike, a Portland festival, where it will share a table with Whole Foods. It also will be at the Seattle Bouldering Project, where West Side will be the only wine being poured amid many microbrews.

Evans said there are plans to put on pool parties at condominiums.

“We’re planning to do promotions all summer long and will trickle into fall,” Evans said. “It will be fun. We’ll know by the end of summer if this whole thing has legs or not.”

By the end of summer, Precept should have a pretty good idea of how popular its wine in a can is, then will look at opportunities to expand.

“Expansion seems like the next obvious step,” she said. “Pinot Grigio would be a next obvious step. White wines are a no-brainer, especially on days like today,” she added, referencing Seattle’s warm, sunny weather on Monday.