Record-setting heat during April kick-started the 2016 vintage in the Pacific Northwest wine industry, with the Walla Walla Valley recording nearly twice as many growing degree days during the same month of last year’s historically hot season.

That’s nearly twice the figure of a year ago – and the 2015 vintage ended up 6 percent warmer than the previous record.

Statistics for growing degree days from the north Willamette Valley station in McMinnville, which help give an indication of the status of Pinot Noir vines, were nearly three times higher – 188 to 72 – than at the same point in 2015.

“Growing degree-days are higher than normal over all of California, Oregon and Washington, with April accumulations running much higher than the last two warm years,” Jones wrote today in his latest report for the Oregon wine industry. “GDD accumulations are running roughly 15-25 days ahead of 2015.” 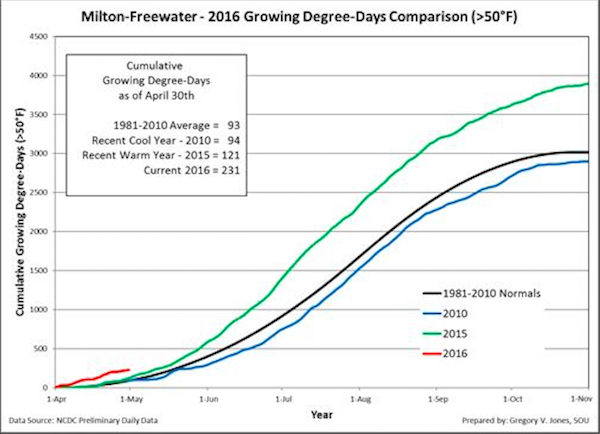 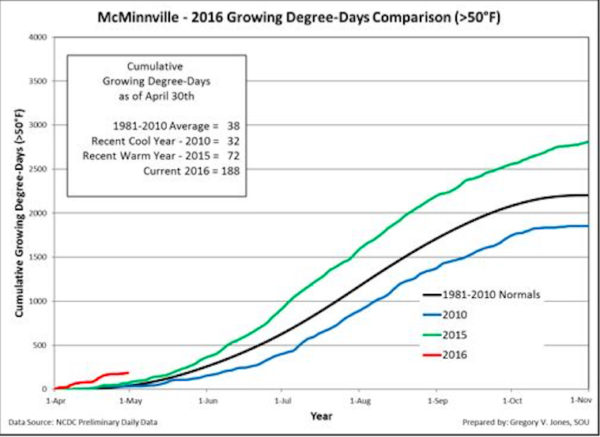 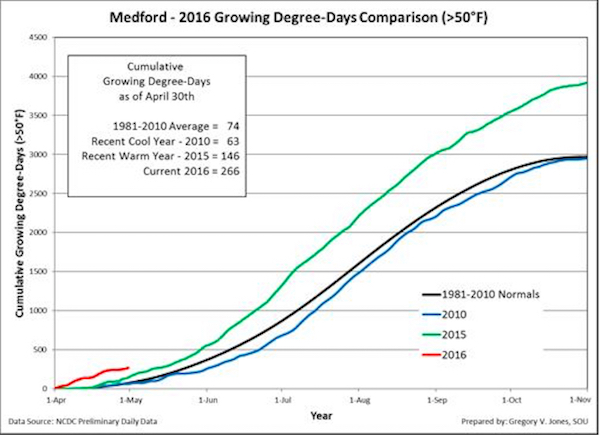 Washington State University’s AgWeatherNet charts growing degree days throughout the Evergreen State. Through April 30, there were 336 growing degrees days recorded at the Wahluke Slope station. A year ago, it charted 175 GDD.

“Overall, April ended up much warmer than average over most of the western U.S., especially Oregon, Washington and Idaho where temperatures 5-7°F above normal were experienced in wine regions,” Jones wrote.

And the forecast for the rest of May calls for more of the same in the Pacific Northwest, with close to average rainfall potential.

An early start to bud break and growth led to more concerns about frost damage in the Pacific Northwest. Mother’s Day has been a traditional time to celebrate the end of such worries.

“With the early growth this spring, a cautious watch for frost during April played out across the western U.S.” Jones wrote. “While generally warm conditions prevailed, a cool blast of air out of the North Pacific during the last week of the month brought frost risk to some regions. While mild compared to the devastating frosts in Europe during April 24-27 (e.g., Burgundy, Loire Valley, Germany, etc.), areas in the western valleys of Northern California and Oregon have reported some frost damage.”

However, there are no dominant cold air masses on the horizon for the next 6-10 days, “so it appears that frost pressure might be behind us in 2016,” he wrote.

Sea surface temperatures in both the North Pacific and tropics drive the expected transition from El Niño to La Niña, and climate experts predicting more snow and colder weather this winter for the Pacific Northwest than in recent years.

“The warmer coastal waters along the West Coast should help bolster a warmer than average growing season, especially higher minimum temperatures, but the cooler pool might be indicative of a slowing of this effect,” Jones wrote. “Long range forecasts are typically driven by conditions in the North Pacific and the state of El Niño in the tropics. If we continue to see a shift to cooler waters in the North Pacific AND the tropics transition to La Niña, the western US will likely shift into a cooler regime, especially into the fall and winter.”

While El Niño has been particularly challenging for irrigators and growers from 2012 to 2015, it’s also marked a string of acclaimed vintages for many in the Pacific Northwest.

“Most prediction models indicate the continued weakening El Niño conditions during the rest of the northern spring season, returning to neutral by late spring or early summer 2016, with La Niña development likely by fall,” Jones wrote. “Sea surface temperatures in the tropical Pacific have continued to weaken, removing the fuel for what was once considered one of the strongest El Niños on record.”

As this point, the 90-day forecast spanning May, June and July should seem familiar.

“No substantial change to the pattern in the western U.S. with everywhere in California, Oregon, Washington and Idaho expected to see higher than normal temperatures,” Jones wrote.

And while frost season appears to be behind the grape growers, those farming for cherries will continue to worry about harvest-time rainfall damaging those crops.

“The precipitation forecast for the West does not change much, with normal to slightly above normal rainfall expected from southern Oregon south throughout California, while the rest of the PNW is forecast to have average rainfall conditions over the next 90 days,” Jones wrote. “The precipitation forecast out over the next 90 days is driven by increasing chances of warm season thunderstorms which are typically quite spotty, so amounts received will vary tremendously.”