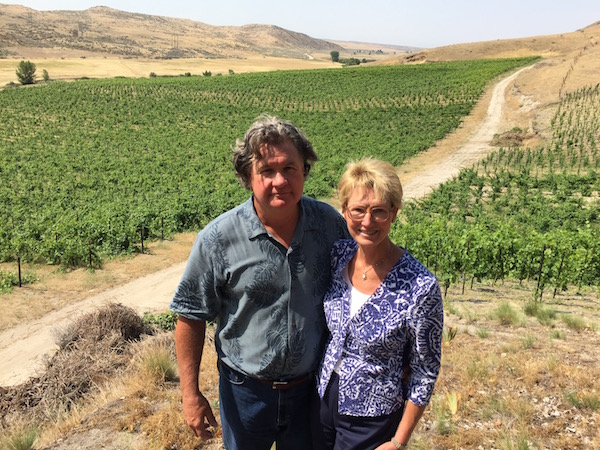 EAGLE, Idaho – Gary Cunningham needs no help selling them, but 3 Horse Ranch Vineyards is poised to release the inaugural  wines labeled with the new Eagle Foothills American Viticultural Area designation – the first sub-AVA of the Snake River Valley in Idaho.

“I was in Spokane last week and there were people talking to me who I was surprised even understood what an AVA is,” Cunningham said. “There are some really serious people out there who really understand it, and there’s a lot of curiosity about it.”

The bottles of the 2014 Sangiovese that carry the Eagle Foothills AVA are from Witte Vineyard near the town of Eagle, and that release is 174 cases. The 2014 Syrah, which came off the Cunninghams’ estate, is a 120-case production.

“June is Idaho Wine Month, so we plan to do special release to our wine club for those two wines in two or three weeks,” he said. “Unfortunately, we have such a small quantity of those wines, they will be sold in the tasting room only. And we actually put the case production on the back of those bottles because we wanted people to know how limited they are.”

Even though his wines – made by award-winning Greg Koenig in Idaho’s Sunnyslope Wine District – are sold only in six Western states, there’s still more marketing and education involved than one might expect.

“There are people out there who are not used to the fact that Idaho actually grows grapes, so we’re still facing that battle with the common consumer – that yes, Idaho actually does have vineyards and we’re growing grapes in Idaho,” Cunningham said.

At this point, 3 Horse Ranch Vineyards must use “Single Vineyard” on the label of the Eagle Foothills wines off its own vineyards. The Alcohol and Tobacco Tax and Trade Bureau (TTB) – the federal agency that regulates the wine industry – told Cunningham since the 3 Horse Ranch wines are made at Koenig’s winery in Caldwell, he is forbidden from labeling them as “Estate” because the wines are not bottled at a facility he owns. Witte Vineyard is the only other site in the new AVA with a history of commercial grape growing.

Cunningham’s wife, Martha, spearheaded the Eagle Foothills AVA petition that was established by the AVA on Nov. 25, 2015. She received scientific input from climate expert Greg Jones of Southern Oregon University and geologic expertise from Clyde “C.J.” Northrup, a professor at Boise State University.

The Eagle Foothills, at 2,912 feet elevation, is on the edge of viticulture viability at this point. Winter damage wiped out much of the 2013 vintage and essentially the entire 2015 crop. That makes the 2014 wines bearing the new Eagle Foothills AVA more special.

However, the 2016 vintage looks to be record-setting for 3 Horse Ranch Vineyards, a project the Cunninghams began in 2002.

“We’ve had the most perfect spring you could possibly have,” he said. “We’re looking to harvest 100 tons of fruit from this vineyard for the first time. We’re closing in on 60 acres total after we’ve added a lot of new vines and expanded our plantings by laying off new vines and filling end posts. We took advantage of the down year to be as big as possible this year.”

Cunningham’s goal is to produce as many as 7,000 cases’ worth of wine off his estate vineyard from the 2016 harvest, which would be about 50 percent of 3 Horse Ranch Vineyards’ total planned production from this year’s vintage. He said he will keep pulling in some fruit from Washington state, but his relationship with Echo Ridge Vineyard near Hermiston, Ore., has ended.

The primary sources for 3 Horse Ranch Vineyards fruit in Idaho are a combination of his estate plantings and Williamson Vineyard, a site in the Sunnyslope Wine District owned and farmed by the Williamson family. Koenig also makes the wines for the Williamsons.

“About 80 percent of what we put into bottle each year is Idaho fruit,” Cunningham said. “I could sell more if we could get more. Our goal is to purchase from vineyards in Idaho because we believe in the quality and we want to represent Idaho.

“The Idaho Statesman wrote a story last week that talked about how Idaho just doesn’t have enough grapes planted,” Cunningham added. “That’s something virtually every winery in Idaho faces.” 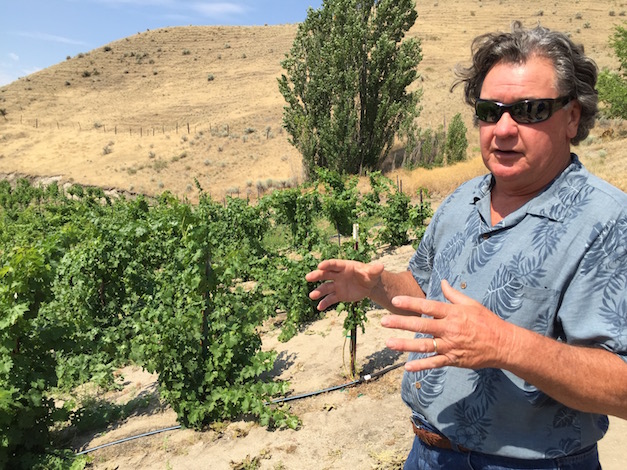 Gary Cunningham chose to retrain his 3 Horse Ranch Vineyards in the aftermath of the devastating November 2014 freeze. (Photo by Eric Degerman/Great Northwest Wine)

He’s entering the Alaska market, adding to his presence in Idaho, Washington, Oregon, Wyoming and Montana. A remarkable figure is that about 80 percent of his sales are made outside of the Gem State, making 3 Horse Ranch Vineyards an important brand representing Idaho.

“We’ve never raised a single price point,” Cunningham said. “We want the consumer to find and afford these good wines from Idaho and keep buying them. That’s what’s important to me.”

Two of his biggest productions are 2,000 cases of his 2014 Syrah from the Snake River Valley and 1,300 cases of 2014 Idaho Viognier. He’s particularly excited about his 2013 Beau Geste, a three-state blend built upon Cabernet Sauvignon that’s his most expensive wine at $28. His regret is that he couldn’t make more than 700 cases.

“We’re struggling because we’re sold out of so many items,” he said. “We’re trying to bottle as fast as we can get the wines into bottle. We’re just a few days away from our wines going into all of the Fred Meyer stores and QFC stores in Oregon and Washington, and we’re entering the Alaska market. The biggest concern is having enough wine to keep our spot on the shelves.” 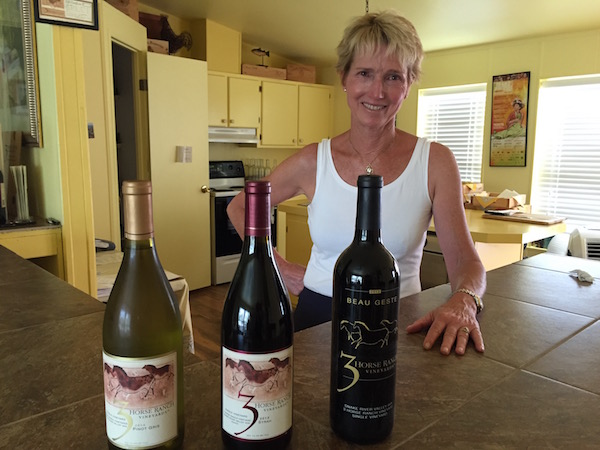 Martha Cunningham, who graduated from the University of California-Davis with a degree in physical education, wrote the petition for the Eagle Foothills American Viticultural Area. (Photo by Eric Degerman/Great Northwest Wine)

Cunningham said the growth of his vines are tracking along with the rest of the Pacific Northwest, which Jones said is running as much as three weeks ahead of the 2015 vintage – the earliest on record for the region.

Unfortunately for Idaho, many of the Snake River Valley sites were damaged – some severely – by a freeze event in November 2014.

“We are way out in front and going into flowering right now,” Cunningham said. “It’s spectacular. The good news is that we never have to worry about the grapes for our white wines ripening, and the red fruit is so far out ahead that we can carry more tonnage than we normally would. I think we can ripen everything that’s out there, but we won’t know for sure until fruit set.

“Last year, we cut everything back to the ground and retrained the vineyard, and that’s repaying huge dividends,” he said. “All the hard work that we did in preparation looks like the smartest thing we’ve ever done, but we were hoping rather than knowing.”

Cunningham said his compost tea program has been a boost, but he’s also made two important additions to help 3 Horse Ranch Vineyards going forward – bringing on step-brother Mike Smith from Arizona to serve as his Idaho brand manager and hiring Toby Mancini to oversee his vines. Mancini is new to vineyards after spending several years as a horticulturalist at the Idaho Botanical Garden in Boise. 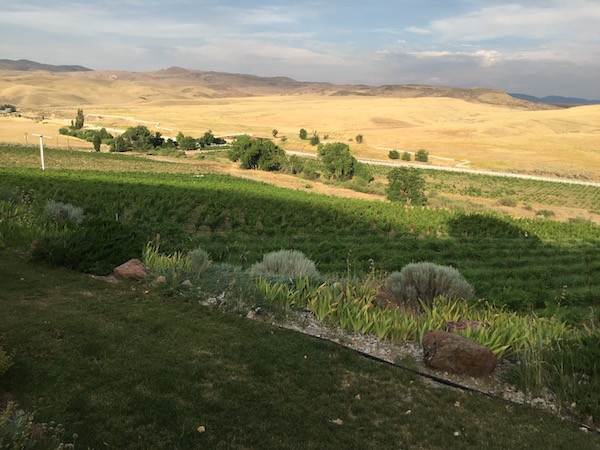 3 Horse Ranch Vineyard, established in 2002, is the largest planting in the new Eagle Foothills AVA at 44 acres. (Photo by Eric Degerman/Great Northwest Wine)

On his recent most flight from Alaska, Cunningham read a magazine profile on wine industry iconoclast Charles Smith, a master marketer who’s helped raise the profile of Washington state.

“Sure, there’s some marketing genius with what he’s done, but it’s also a lot of hard work, and not a lot of people want to work that hard,” Cunningham said. “Robert Mondavi’s book talked about him getting on a plane to New York City and walking from restaurant to restaurant hand-selling wine. We kind of do the same damn thing. Don’t get me wrong, I’m not saying that I’m Robert Mondavi or Charles Smith, but I can understand why they’ve been so successful. Not too many suppliers get out into the market and do what we do. Believe me, we’re not geniuses. We just work hard.”

Cunningham left Sacramento, Calif., after a successful career in the world of corporate business travel. He and Martha spent eight years in McCall before buying 1,600 acres along dusty Pearl Road in the Eagle Foothills. They slowly transitioned a small percentage of their horse ranch into vineyards. His 100,000 airline miles each year and hotel rewards program are two reasons why the former single-handicap golfer gave up the game years ago.

“It will be a real interesting challenge for our little company to meet the wine stewards at all of these stores and tell them, ‘You’ve got this wine coming into your store and what can we do to help?’ ” Cunningham said.

Earlier this year, he and Martha traveled to the Old World for some new insights in marketing, participating in a Viking River Cruise of the Rhône with 38 members of the 3 Horse Ranch Vineyards wine club.

“Every single time I learn so much about what people are consuming, what wine styles they like and what their wine buying habits are,” he said. “It’s a marketing education for me. And this time, we were able to buy our Euros at $1.04, which was pretty substantial.”