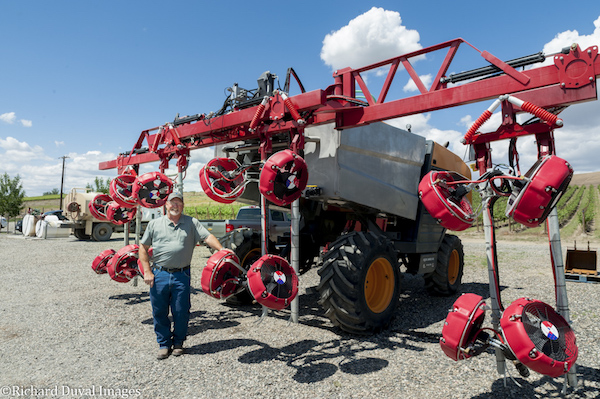 Marshall Edwards, vineyard operations manager for Shaw Vineyards and Northwest Vineyard Management, stands next to the four-station mechanical sprayer he uses at Quintessence Vineyards on Red Mountain. The 800-gallon tank allows the operator to cover four rows at a time and 16 acres in a session. (Photo by Richard Duval Images)

BENTON CITY, Wash. – One of the most important growers on Red Mountain is encouraging more of its winemaking customers to embrace mechanical harvesting for a variety of reasons.

“This year, we’ll be harvesting more than 500 acres on Red Mountain, and a majority will be picked by hand, but we’re hoping to do more with machine,” Edwards told winemakers. “When we get done with this tasting, I’m hoping it will encourage more of you to look at harvesting with the Pellenc Selectiv.”

Cabernet Sauvignon is king on Red Mountain, and the May 18 tasting of Cab from the 2015 vintage spanned Shaw, Obelisco and Quintessence vineyards. There were 14 samples from some of the state’s premier brands, including Canvasback, Col Solare, Darby, DeLille, Fidelitas, Guardian, Gorman, Henry Earl, Januik, Mark Ryan, Tamarack and Ali Mayfield’s new project – The Walls.

“Part of what this tasting is about is to show something about machine vs. hand harvesting,” Edwards said. “The machine is not for every tier you have, but over time we’re going more that way because labor is getting harder and harder for us to get on Red Mountain.” 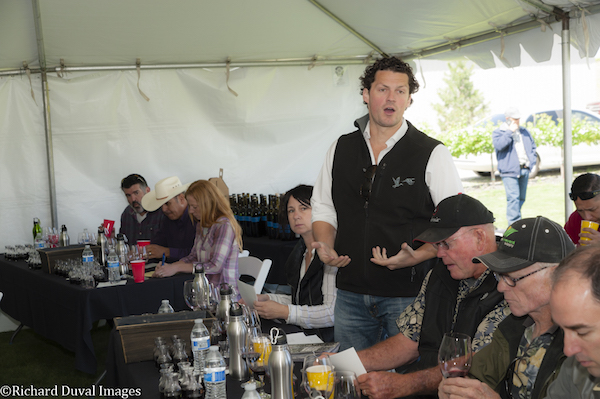 Edwards estimated he used the Pellenc while picking about 50 acres last year. He already has a return customer in Walla Walla’s Brian Rudin, winemaker for Canvasback, the Red Mountain-focused brand of Duckhorn Vineyards in California’s Napa Valley.

Rudin provided to the group a sample of his Pellenc-picked Cab – clone 8 – from Shaw Vineyard. It was taken via mechanical harvest Sept. 16 at 27.5 Brix. That was five days later than the pick for Henry Earl, the label for vineyard owner Dick Shaw and the only other winery in the tasting that employed the Pellenc.

“I was really impressed at what the Pellenc can do,” Rudin said. “As a winemaker, the things you would worry about from a machine pick would be an excessive degree of crushing and too much MOG (material other than grapes) in the bin – anything that’s going to contribute to an overextraction or green or harsh tannins being extracted.

“But in the bins, it was super clean,” he continued. “You only saw petioles and the occasional jack. Frankly, we can get it cleaner with the Pellenc Selectiv than we can get it with hand-picked and our basic sorter equipment at our crush pad.”

He said there was no secondary sorting required. “It just looked sharp,” Rudin said. 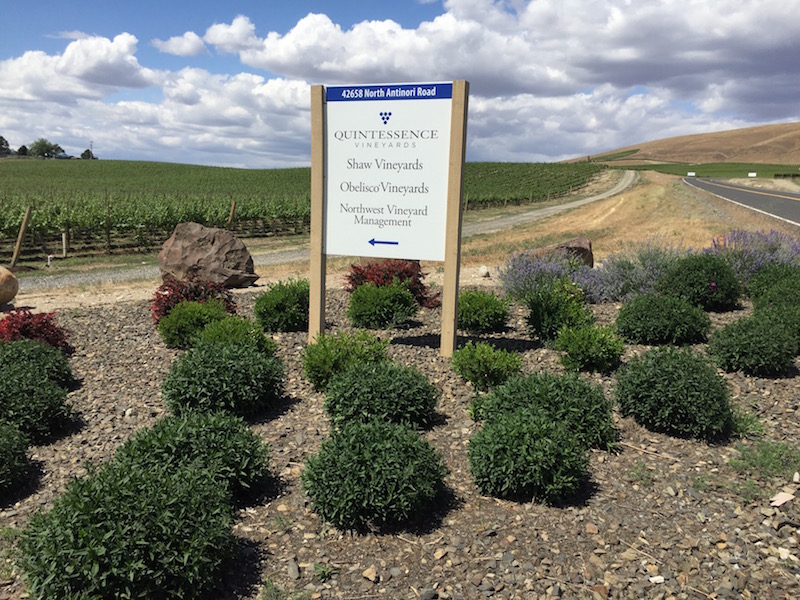 Edwards pointed out the Pellenc destemmer that rides atop of the tractor while the machine picks is the same as the model sitting on the floor at some of Woodinville’s cult wineries.

“And we’ve got two of them – one on each side that dumps into each tub,” Edwards said. “We can pick it cleaner than they can run it through their older destemmer in their wineries – unless they’ve got a Pellenc-style destemmer or a new style destemmer. The fruit that comes out of it is so clean. It’s beautiful.”

Rudin pointed out the percentage of berries crushed during the process doesn’t adversely affect his winemaking.

“The amount of crushing is fairly minimal, I’d say 30 or 40 percent, but I like a little bit of crush in my Cabernet ferment so I can get it hot quick,” Rudin said. “That’s a goal of ours at Canvasback, so having some juice is a good thing.”

Edwards said he also used the Pellenc setup to help harvest fruit off some of Shaw’s holdings at the Wahluke Slope. Shaw’s wife, Wendy West, owns the Pellencs and also operates her company’s tractors.

“We use it for some of our high-end stuff in Mattawa, so in total we did about 100 acres with it last year,” Edwards said. “That’s pretty good for our first year. We had just picked it up. Once we got interest from Duckhorn and Ste. Michelle, too, that’s what made us buy the machines.”

Rudin came off to the group as such a proponent of the Pellenc that he was jokingly asked if Edwards would allow him to drive the tractor. Last year, he did get to go along for a ride.

“I do believe in it, and we’re going to move forward with more machine-picking this year,” Rudin said. “I’m really attracted by the quality, and that’s the only thing I care about.” 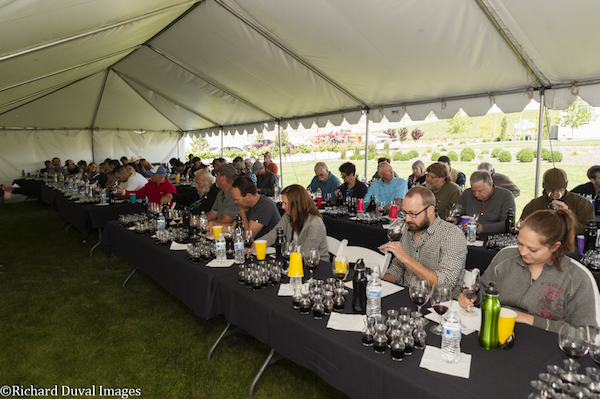 Those who choose to harvest by hand may also face the unknown that inexperience can bring.

“This is the first year we’ve ever used contract labor,” Edwards said. “Contract labor is OK, but you get a lot of people who aren’t experienced vineyard people, so you are constantly training them.”

Among the advantages for using a machine to harvest is an earlier delivery time to the winemakers.

“We can pick it at night and have it on a truck headed to you guys at 7 a.m.,” Edwards said. “Most of you are in Woodinville, so instead of it arriving at 10 or 11 p.m., you can have the fruit sitting on your doorstep hopefully by 11 a.m. or noon. That can be a big advantage.” 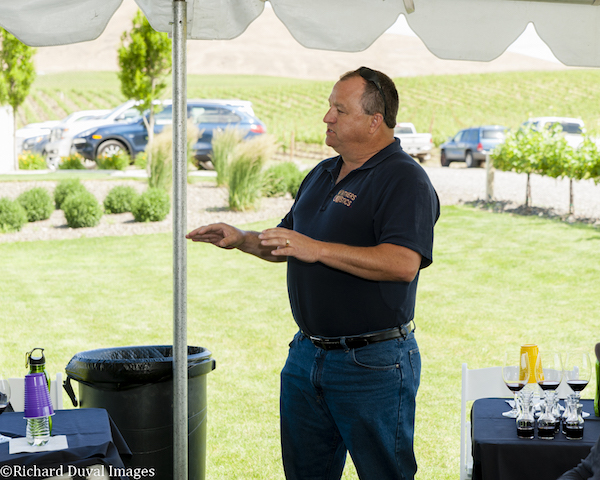 Late-morning deliveries to the Puget Sound can make for more efficient driving, and Edwards asked Robert Thompson, owner of Vintners Logistics, to explain changes ahead for anyone who relies on commercial transportation of grapes.

“The transportation laws are getting tighter, tighter and tighter,” Thompson said. “In 2017, everything goes to electronic logs and electronic timing for all of the semi trucks. They get plugged right into the truck, and that means if something gets slowed down at a vineyard and we are two miles or two blocks from your winery to make that delivery, the truck shuts off. We’re not making it there.”

Thompson’s company handles deliveries year-round of barrels, bottles, grapes and wine storage for more than 1,000 wineries in the Pacific Northwest, including Oregon and Idaho.

“We’re allowed 14 hours to work right now with 11 hours of drive time,” Thompson said. “The federal government – the Department of Transportation – has asked for that to be knocked down to eight hours per work period in the next few years. There will be substantial impacts to the transportation world when that happens.

“Having the fruit picked on time is going to have a huge impact on us making a delivery,” he added.

A key component about the Pellenc is reliability, Thompson said.

“When my beautiful bride calls up the vineyard and asks, ‘OK, Roger, how many guys showed up today?’ The response might be, ‘Well, four people didn’t show up for work today so we thought we’d be ready at 10 a.m., but now it’s going to be probably 3 p.m. They went and picked apples instead’.

“Those are the types of challenges we are seeing every year,” Thompson added, “and it’s only getting worse.” 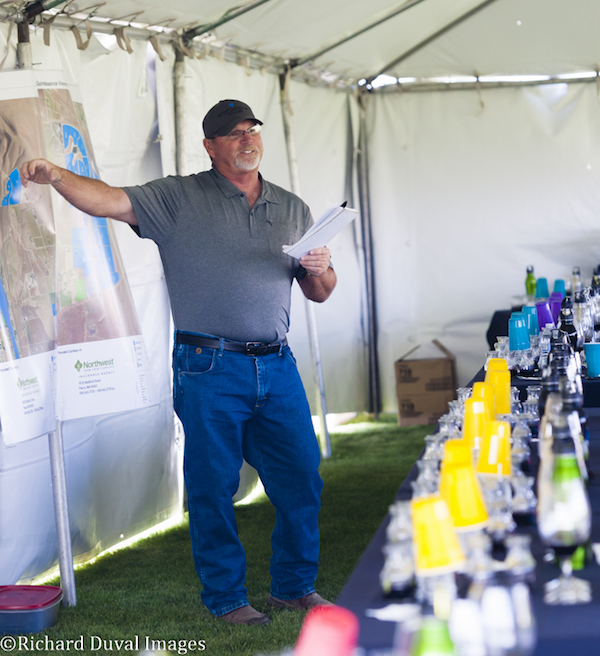 The inaugural Quintessence Vineyards tasting was staged June 12, 2014, and featured samples from the 2013 harvest. That Kasee Woods, manager of Shaw Estate Wines, now brings the winemakers in a month earlier coincides with successive record-breaking vintages of the past two years.

Next year’s might well to be mid-May, too. Some, not all, winemakers chuckled when the prospect of harvest for the 2016 vintage on Red Mountain starting as soon as late July.

James Bukovinsky, viticulturist for Quintessence, Shaw and Obelisco vineyards, shared data that indicates picking could start in July for the few white grapes grown on the state’s hottest region.

“In terms of seeing bloom, we’re about a week ahead of last year,” he said.

As of May 18, there were 600 growing degree days recorded at Washington State University’s new AgWeather Net station — labeled Red Mountain — installed near the eastern edge of Quintessence Vineyard.

“Last year at this time, we were around 333,” Bukovinsky said. “Who knows? Next year, we might see bloom in April.”

More grapes, plantings on the way 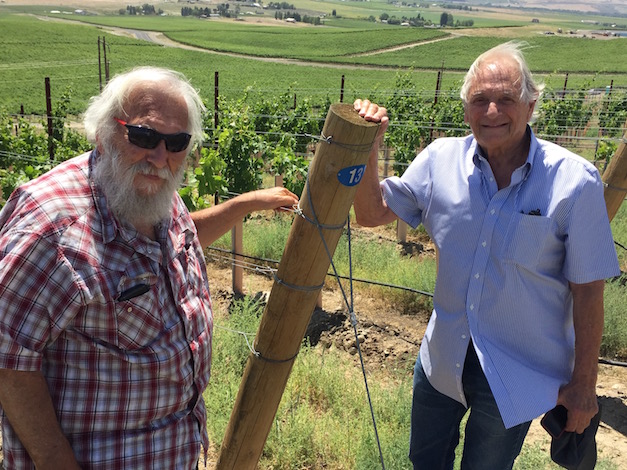 Shaw and Paul Kaltinick are partners in Quintessence Vineyards. Shaw, who owns more than 2,200 acres of vineyard throughout the Columbia Valley, also is in the final stages of establishing approximately 1,000 acres of production vineyards a stone’s throw from Horn Rapids Dam – not far from the northern slopes of Red Mountain. Shaw served as the honorary grower for the 2015 Auction of Washington Wines.

“This is more than just a barrel tasting,” Edwards said. “This is a way for every one of us at the vineyards for thank you guys for being partners with us in the vineyards.

“Without you, we wouldn’t succeed, and hopefully without us, you won’t succeed,” he quipped, which brought plenty of laughter from the winemakers.

Edwards noted the third phase of Quintessence Vineyards will be coming into commercial production for the 2016 harvest, yet not all of it is spoken for yet.

“Most of the fruit is sold, but we do have a little bit of fruit leftover,” he said. Those lots include Cabernet Sauvignon clone 2, clone 8 and clone 33.

A final few blocks in Quintessence will be planted in 2016, including Grenache and more Cabernet Sauvignon. An additional 50 acres near the Aquilini plantings are destined for Malbec, Merlot, Petit Verdot, Syrah and three clones of Cabernet Sauvignon – 2, 4 and 10.

“There will be a few years before they come on,” Edwards said.