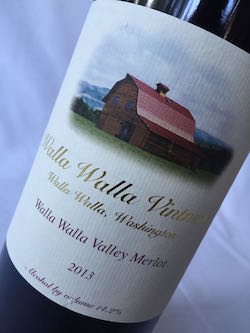 Back in 1995 when Myles Anderson and Gordy Venneri decided to launch Walla Walla Vintners, they wondered if they were too late to the party. After all, the Walla Walla already had seven wineries.

More than 20 years later, the two run one of the state’s most successful wineries, and the Walla Walla Valley now has more than 130 producers.

Walla Walla Vintners has always had a deft touch with Merlot, especially in years when a warm spring blesses its Walla Walla Valley estate vineyard, as 2013 did.

This version reveals the winery’s typical refined touch with oak, which adds a touch of mint and spice, then aromatic blackberries and blueberries. Black currants, dark chocolate and regimented tannins close out its lingering finish.

This earned a gold medal at the 2016 Cascadia Wine Competition.