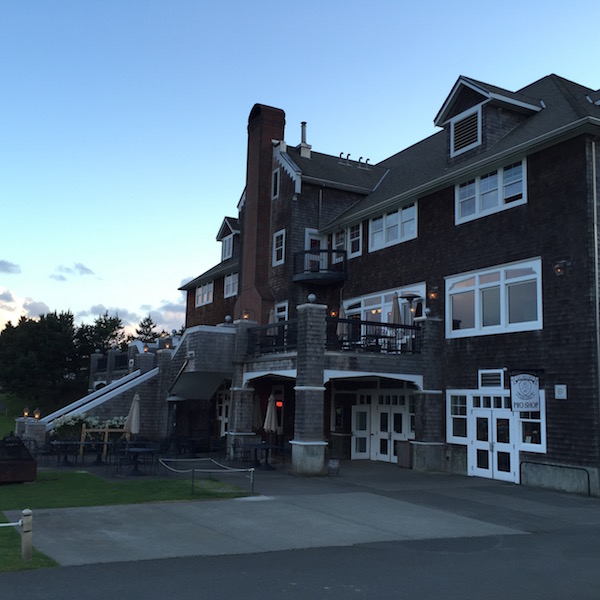 GEARHART, Ore. – It says something about the state of Oregon wine when there’s a poster promoting Oregon Wine Month in the men’s washroom at historic Gearhart Golf Links – established in 1892.

Perhaps it shouldn’t be all that surprising, considering the sport’s oldest trophy is known as the Claret Jug, the prize handed to the winner of the Open Championship played in the United Kingdom. Those who enjoy the game of golf, regional wine and craft beer while supporting projects owned by Pacific Northwest natives may best appreciate the Gearhart experience nurtured by Columbia Sportswear CEO Tim Boyle and the McMenamin brothers.

In fact, it’s a perfect fit.

“This is the oldest golf course west of the Mississippi, and I got involved years ago when a group of us decided to buy the golf course,” Boyle told members of the Northwest Golf Media Association last month. “I bought out my partners five years ago.”

A component of Boyle’s vision was to create a dining and lodging experience that played well with the historic, unpretentious nature of his golf course. No one is better at that in the Pacific Northwest than McMenamin brothers Mike and Brian. Boyle was a schoolmate of Mike’s at Jesuit High School. The brothers now operate more than 60 neighborhood brewpubs, hotels and theaters in landmark but most often neglected buildings they’ve revived throughout the Northwest.

“I’ve known those guys for a long time,” Boyle said. “During the partnership years, several of the partners tried to run the restaurant and it was a disaster. I thought, ‘Let’s call Mike McMenamin and just give him the restaurant.’ ”

Boyle admits it wasn’t an easy sell to Mike McMenamin, primarily because golf on the Oregon coast has had a reputation as a seasonal business. However, Boyle used the charm of a round of golf at Gearhart to woo McMenamin.

“He called me a week later and said, ‘You know, that’s kind of interesting,’ ” Boyle said. “We’re fortunate to have him and his brother come in and make the restaurant better. Then we put the hotel rooms in three years ago.”

Now, there are the three layers that make for an ideal golfing getaway – an entertaining, walkable and notable course, an inviting 19th hole downstairs with dining on the main floor at the Sandtrap Bar & Grill and comfortable lodging upstairs. Some of the 18 rooms offer views of the links.

“It’s really been a terrific operation,” Boyle said. “Those guys really know how to run a brewpub, which is what should be here.”

PGA professional Jason Bangild, who serves as Gearhart’s director of golf and general manager, said, “A lot of people walk in the pro shop who have never golfed and have no intention of golfing, and about 100 percent of our golfers go in and have pints when they are done. It’s been a nice partnership.”

What golfers and guests will experience is the fourth version of the Gearhart Hotel, which burned down in 1999 and reopened in 2001. And folks don’t need to play golf to enjoy the beauty of Boyle’s course, which becomes more reminiscent of Scotland in June when the fescue grass really begins to grow.

“We still have people who come in and say, ‘When did they put this golf course in?’ ” Boyle said.

Gearhart is working on broadcasting its message.

“We’re focusing our marketing efforts on getting the word out that it’s becoming more of a resort with the hotel and the condos across the street,” Bangild said. 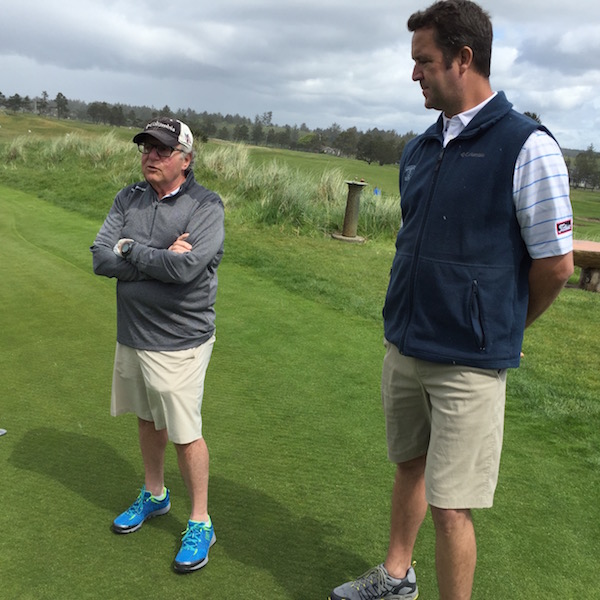 Tim Boyle, CEO of Columbia Sportswear, details some of the recent improvements at Gearhart (Ore.) Golf Links, which include the hiring of PGA professional Jason Bangild, right, as his general manager and director of golf. (Photo by Eric Degerman/Great Northwest Wine)

For more than a century, this section of the Oregon Coast, from Astoria to Cannon Beach, has served as a weekend playground for families in Portland. And the course at Gearhart, much of it shrouded by trees that had grown to rob it of its linksland charm, was where Boyle learned to play golf on 30 years ago. Never will it become a private club because it comes with a restriction that it can only be a public place, said Boyle, who views his role as more of a custodian rather than owner.

“We’re just here for a while,” Boyle said. “It’s really been great bringing it back to its original design and landscape.”

His course serves as a living tribute to several fascinating figures in the Northwest, but it began with Philip Gearhart, who arrived in the area in 1849 and had purchased nearly 1,800 acres in the area by 1863. The first to layout holes for what would become Gearhart Golf Links was Robert Livingstone, an agent for Scottish banking interests investing in Northwest railroad construction. He built a home in Portland in 1891, and ironically, the site of that house – built the year before the links were established – is now home to McMenamins Rams Head Pub.

As a child, Portland native James Beard spent summers at Gearhart starting in 1906. As a chef in New York City, he’d return to nearby Seaside and stage cooking classes. By 1954, the New York Times referred to Beard as “The Dean of American Cookery,” and he’d share stories about one of his favorite delicacies – the razor clams he grew up harvesting in Gearhart. His influence on the nation’s culinary industry led to his home becoming a Mecca for chefs, and the James Beard Awards are the Grammys of the U.S. culinary community.

While Boyle’s golfing ties to Gearhart don’t go back to childhood, his connection to the course is emotional.

“The family grew up playing here, and when the (Gearhart) business got into trouble, this was like an institution that needed to be saved,” Boyle said. “Both of my kids played golf in college, and they really have a great affinity for the game, so it was really a family investment.” 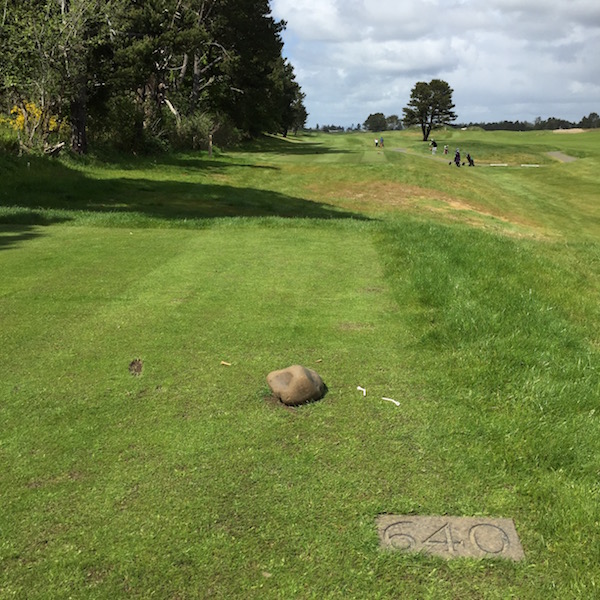 No. 9 at Gearhart Golf Links can be played as a demanding 640-yard par-5 from the set of tees known as “The Stones.” (Photo by Eric Degerman/Great Northwest Wine)

Boyle’s interest and investment has allowed him to compile an impressive team at Gearhart Golf Links, and they’ve done what he describes as “polishing a gem.”

Perhaps it’s no coincidence H. Chandler Egan, arguably the most influential architect in the Pacific Northwest, is credited with the most significant design work at Gearhart Golf Links. The Harvard graduate won the U.S. Amateur three times, but his legacy lives on in Washington and Oregon with his regal layouts at Eastmoreland, Eugene Country Club, Indian Canyon, Tualatin Country Club, Waverly Country Club and West Seattle.

“The last time golf was played in the Olympics (1904), he was on that team, which won the gold medal,” Boyle said.

But much of Egan’s work at Gearhart would become lost because of the trees that grew up after his death in 1936, so when Boyle took over, he brought in John Strawn, president of International Golf Course Architects, as the consulting architect. He’s also an author who is a member at Gearhart.

The redesign involved removing 400 trees, which brought Gearhart Golf Links back to just that – a links-style course rather than the parkland course it had become since the 1950s, when most of those trees were planted. The creation of 11 tees added 300 yards, stretching the course to 6,501 yards when played from “The Stones.”

“When we removed all those trees, the course sort of revealed itself to us,” Bangild said. “All these great mounds and contour lines showed up, and we reshaped all the fairways. We only added two bunkers, but we did add some fescue pockets to give a bit of teeth to the golf course where the trees were not.”

“We’re really lucky to have Forrest, and he’s been here for four years now,” Bangild said. “He’s everything green.”

This summer, players can expect to find greens that require a putter with a diamond cutter’s precise touch.

“They will roll between 11 and 12 on the Stimpmeter, which is pretty amazing,” Bangild said. 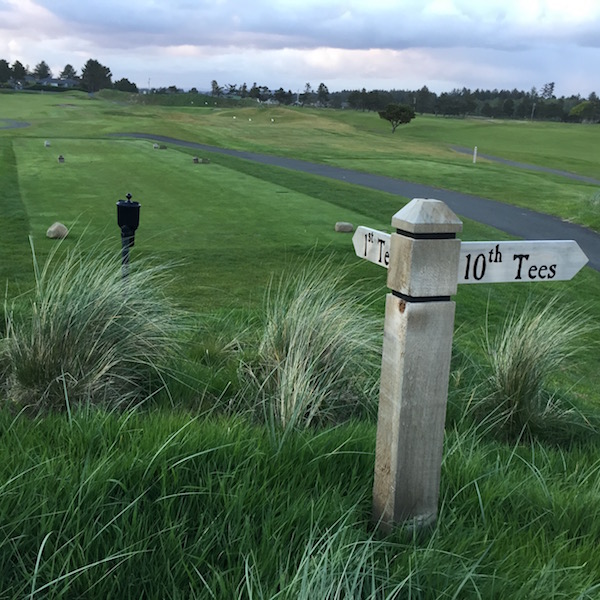 The recent remodel of Gearhart Golf Links on the Oregon Coast included the removal of more than 400 trees. (Photo by Eric Degerman/Great Northwest Wine)

Boyle recruited Bangild from the Big Island of Hawaii and Nanea Golf Club, where Boyle also is a member. Bangild was the director of golf at Nanea and a resident of Hawaii for 11 years, but the opportunity to implement Boyle’s dreams for Gearhart also meant coming to a cozy and quiet community where he could raise his family, commute to work via a golf cart and dig for the clams Beard adored.

These days, the Canadian golf professional joked that Kona became too sunny for him.

“I ran out of sunblock,” Bangild quipped.

Last winter, he needed rain gear when he left the house, but the course quickly becomes playable because of the quick-draining sand it’s built upon. It’s another feature of links golf that appeals to those whose who tire of sloshing through soggy fairways in the Willamette Valley.

“We had 40 inches of rain from Dec. 1 to about the first of March,” Goodling said. “The year before, we had about five. As everybody had a lot of rain this last winter, so did we. But last year (2015) was wonderful. We had 60-, 70-degree days in January and February.”

Those type of glorious days can come out of nowhere along the Oregon Coast, which golfers chalk up to simply the rub of the green. Gearhart, which sees 23,000 rounds of play a year, offers stay-and-play packages that involve the hotel, condos across the road and some cottages in downtown Gearhart. Bangild and his team will stage two Oregon Golf Association championships this year and a variety of other tournaments, some of them family events. There’s also the remarkable Oregon Auto Dealers Association seminar.

Chronic back problems limit the amount of golf Bangild plays these days, but he seems to relish his role with Boyle’s vision for the Pacific Northwest’s oldest course.

“He’s allowed us to do all this wonderful stuff, and it’s been a ton of fun,” Bangild said.

And Boyle is keen to show off the work of his team.

“It’s really been a lot of fun,” Boyle said. 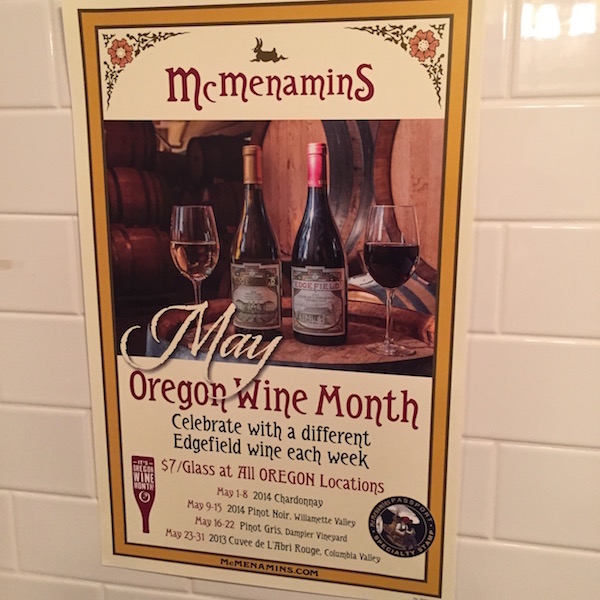 This poster promoting Oregon Wine Month hangs in the men’s washroom at Gearhart Golf Links, which is owned Oregon native Tim Boyle. He brought on longtime friends, the McMenamin brothers, to head up the dining and lodging at McMenamins Hotel Gearhart. (Photo by Eric Degerman/Great Northwest Wine)

Last month, McMenamins Edgefield in Troutdale, Ore., staged its 15th annual Celebration of Syrah. The brothers established their winery in 1990 – the year before they began the hotel, brewery, Power Station Pub and movie theater.

And a former stable on the historic poor farm was transformed into the distillery and the clubhouse for the pair of par-3 golf courses.

And to complete the McMenamins Passport, you must visit both Edgefield and Gearhart to receive stamps, whether you play golf or not. The Passport Experience program also includes a tour of Edgefield Winery.