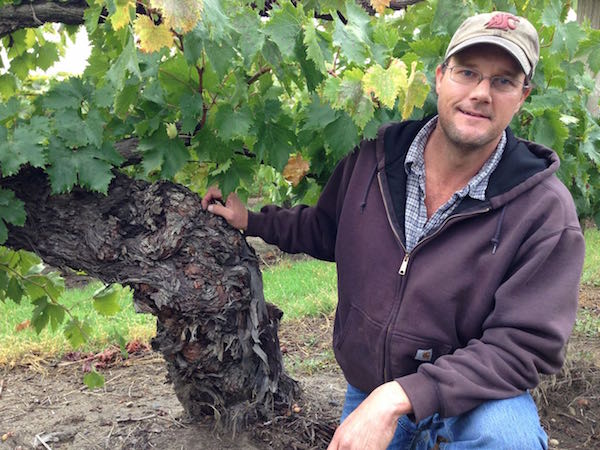 SUNNYSIDE, Wash. – The cradle of the Washington wine industry has been pretty quiet for the past few decades.

That’s all about to change.

Sunnyside is often passed over by Yakima Valley visitors who stop either in Zillah to the west or Prosser to the east. It’s a shame because a century ago, Sunnyside was in the middle of the action, where a man with a vision planted his first wine grapes and got the wine industry started.

Today, two modestly sized but high-end wineries are looking to change that. Co Dinn Cellars is announcing that it will be taking over an 86-year-old building in downtown Sunnyside. And Côte Bonneville is in the midst of a remodel that will transform a 105-year-old former train depot into a posh tasting room.

“We’re having a renaissance here in Sunnyside,” said Co Dinn, former director of winemaking for Hogue Cellars. “But it’s not something new. We’re actually coming full circle back to one of the birthplaces of the Washington wine industry. There’s great history here.”

That is for sure. It all started in 1902, when a Canadian expat named William Bridgman rolled into town.

Bridgman was a lawyer who specialized in water rights. He was the two-time mayor of Sunnyside and helped write some of the irrigation and water-use laws that remain in place to this day.

In 1914, Bridgman planted wine grapes on Harrison Hill in Sunnyside. They weren’t the first grapes to go into the Yakima Valley soil, but they were some of the most significant. Three years later, Bridgman planted more wine grapes on Snipes Mountain, which today is just across Interstate 82 from Harrison Hill. Some of those original grapes – including Black Muscat, Muscat of Alexandria and Thompson Seedless – remain today, making them among the oldest in Washington.

By 1920, the dark veil of Prohibition descended across the nation. Bridgman waited and pondered. By the time the teetotaling experiment officially failed and was repealed in late 1933, Bridgman was ready. The next year, he launched Upland Winery, an operation that lasted until 1972 – four years after Bridgman died at age 90.

In the early 1960s, Bridgman sold property on Harrison Hill to a group of University of Washington professors who were starting a winery called Associated Vintners, now Columbia Winery. Today, those grapes from Harrison Hill Vineyard go to DeLille Cellars in Woodinville and result in one of Washington’s finest red blends.

Since then, Sunnyside has seen little action. While Prosser and Zillah have thrived, Sunnyside’s wine scene has mostly grown stale.

In 1981, Tucker Cellars began on the outskirts of town. In 1988, Cascade Estates Winery launched – and folded. In 1989, Washington Hills/Apex Cellars began, though it has since been purchased by Precept Wine in Seattle and the tasting room relocated to Prosser (it featured a label called Bridgman Cellars that paid homage to Bridgman’s legacy in Sunnyside).

In 2005, Steppe Cellars opened north of Sunnyside. A year later, Todd Newhouse launched Upland Estates, a small winery at the base of Snipes Mountain that honors Bridgman’s original vision.

From water to wine in Sunnyside 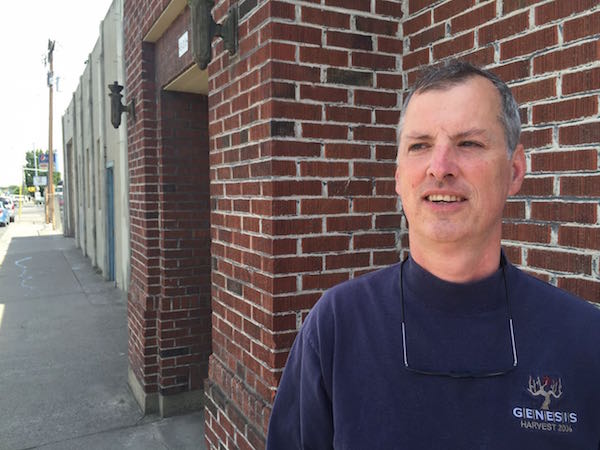 Co Dinn, owner and winemaker of Co Dinn Cellars, will move into the old Sunnyside Water Department building once it is retrofitted to become a winery in downtown Sunnyside. (Photo by Andy Perdue/Great Northwest Wine)

Dinn, who arrived in Washington in 1996 to work for Hogue Cellars in Prosser, left the behemoth in 2013 to launch his own tiny brand. He found a space in Grandview at Yakima Valley Community College to make his first three vintages. Now, he has leased a more permanent home.

In downtown Sunnyside, the water department building has sat mostly unused since the 1980s. The brick building was built in 1930 and houses the city’s first two water wells – long ago capped. Undoubtedly, Bridgman must have walked through this building. After all, he was a water lawyer and lived in Sunnyside for six decades.

Last year, the city deeded the water building to the Port of Sunnyside, which got to work finding a tenant. Dinn loves the space, which includes 2,000 square feet for production and another 1,300 square feet for a tasting room.

A lot of work needs to be done, and the port is preparing to take construction bids. Dinn expects it to be ready in time for Red Wine & Chocolate weekend February 2017 or – at the latest – Spring Barrel weekend in April.

“We’re kind of picking up the torch of the history that already exists here,” Dinn said. “For me, it’s the most ideal place. Some of the best vineyards in the state are a stone’s throw from here.”

He buys grapes from vineyards on nearby Snipes Mountain, as well as Elephant Mountain Vineyard to the west and vines around Benton City to the east.

Across the street is Safeway, which has a Starbucks inside. It’s a short distance from a water park, several restaurants and a taco truck. Not far away is a cabin built by Ben Snipes, a cattle baron who lived here in the 1800s and for whom Snipes Mountain and other landmarks are named.

It is not lost on Dinn that his new operation will open on the 100th anniversary of Bridgman planting those vines on Snipes Mountain. Nor that he is turning the water building into a winery. 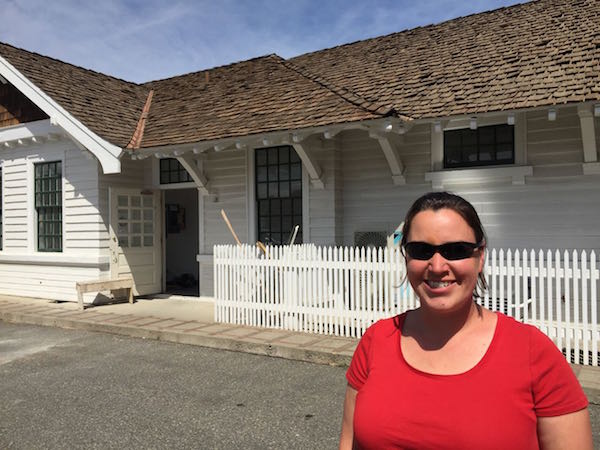 Kerry Shiels stands in front of the former Grandview train depot, which was built in 1911 and moved to Sunnyside by her parents in 1982 to be an medical office building. Today, it is being remodeled to serve as the family’s tasting room for Côte Bonneville. (Photo by Andy Perdue/Great Northwest Wine)

A few minutes away from Dinn’s future winery is the tasting room for Côte Bonneville, owned by the Shiels family. Its history is even more interesting than the water department building.

In 1911, Union Pacific opened a railway from Yakima to Walla Walla. It was the first railway line through this part of the state, said Kerry Shiels, Côte Bonneville’s winemaker and daughter of owners Hugh and Kathy Shiels.

Through the Yakima Valley, the railroad put in train depots at each town. They all used the same cookie-cutter design. The trains ran on that line until 1943, and the depots were abandoned and eventually demolished – except for the one in Grandview.

Just as Union Pacific got ready to take it down in 1982, the Shiels family stepped in, bought the building, took off the roof, cut the building in half, lifted it onto a couple of semi trucks and hauled it a few miles up the valley to Sunnyside. For the next three decades, it served as Hugh Shiels’ doctor’s office – he was an orthopedic surgeon – until he retired at the end of 2014.

In 1992, Shiels planted DuBrul Vineyard in the Rattlesnake Hills, a site that has since gained acclaim as one of the state’s best. The family launched Côte Bonneville in 2001, and it has since grown the brand to about 2,500 cases.

In 2015, the tasting room opened, and the family worked out what it wanted to do next. After Red Wine & Chocolate weekend in February, the tasting room closed for renovations. When it reopens next month, the experience for visitors will be completely different. Instead of the former doctor’s office with lots of small rooms, the 2,000 square feet will be transformed into a lounge and tasting bar area, a reserve room, a catering kitchen, office space and storage.

Wine production remains off site on the north edge of town.

“When you have a medical practice, the concept is to keep people separated and keep their medical issues away from everybody else,” Kerry Shiels said. “It’s a little different than wine tasting, where you’re bringing people together. Originally, it was a gathering place of the town: The train would come in, and everyone would come down to meet the train. Now, it’s coming full circle to people coming together and meeting around wine.”

Together, Co Dinn Cellars and Côte Bonneville are working hard to change the face of Sunnyside and return it to some of its original intention when William Bridgman ruled its roads and prowled its hillsides.