Records for high temperatures continues to fall and growing degree days remain in uncharted territory, and while climate researchers are optimistic for a cooling trend in the next few days, conditions for Pacific Northwest vineyards will return to warmer than average.

“Average temperatures for the period have run 1-4°F or more above the 1981-2010 climate normals for much of California, Oregon, Idaho and Washington,” climate expert Greg Jones, a professor at Southern Oregon University, wrote today in his latest report for the Pacific Northwest wine industry.

Nic Loyd of Washington State University’s AgWeatherNet warned about this weekend’s record heat but tempered that news of models optimistic for a relief later this week.

“Even as the ghosts of last June return to haunt us, there is still some good news to consider:  Cooler and possibly unsettled weather already seems likely later in the period, although there is notable uncertainty about when the temperature modification may progress eastward across the state,” Loyd wrote in a news release. “The eventual and welcome transition back toward normalcy suggests that a repeat of the consistently sweltering June 2015 is thankfully not very likely.”

The 8- to 14-day outlook for June 11-17 projects near average temperatures and near average precipitation for the Columbia Valley. Loyd described normal conditions for June as highs in the 70s and lows in the mid-40s to low 50s.

“A breakdown in the ridge should allow for onshore flow and one or two frontal passages out of the Gulf of Alaska. The result is that temperatures during this period are forecast to be cooler than normal across the Pacific Northwest,” Jones wrote. “The precipitation forecast for this period shows an above-normal likelihood across the Pacific Northwest.”

However, the forecast for the second half of June calls for Pacific Northwest vineyards to experience “much warmer than average conditions,” Jones wrote.

Those hot and dry conditions are expected to extend through August.

“There are no substantial changes to the pattern in the western U.S. with everywhere in California, Oregon, Washington and Idaho expected to see higher-than-normal temperatures,” Jones wrote. “Like the temperature forecast, the precipitation forecast for the West does not change much from the June outlook, with the West forecasted to have an equal chance to be slightly above average, normal or slightly below average.”

Walla Walla Valley ahead of 2015 vintage 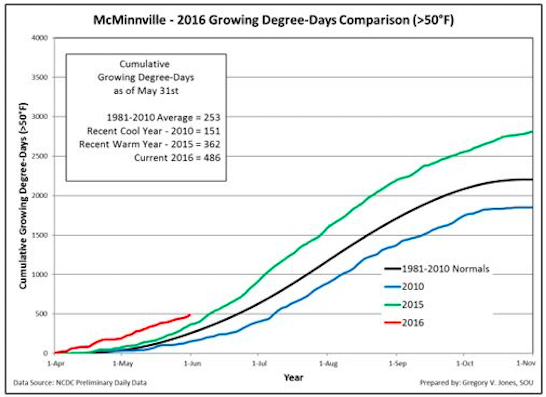 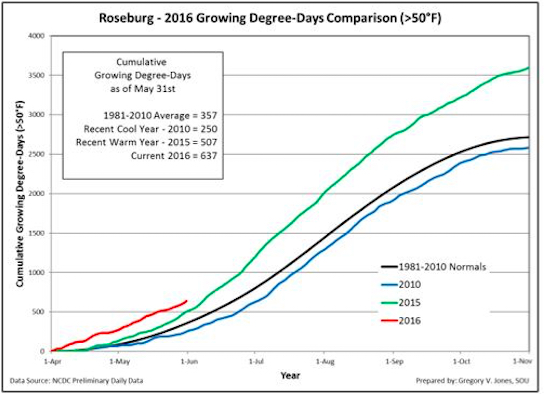 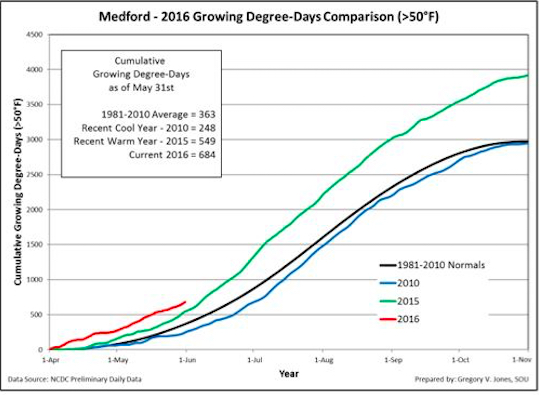 In Oregon’s Willamette Valley, where Pinot Noir is king, the growing season is tracking well ahead of last year’s warm vintage. The McMinnville station stood at 486 GDD – nearly double the 30-year average. A year ago, the total was 362 GDD.

Medford, a station not far from the SOU campus in Ashland, there were 684 GDD recorded. That’s 135 heat units ahead of last year’s hot pace. Roseburg, home to Fault Line Vineyards of Abacela – operated by Greg Jones’ father – Earl – there were 637 GDD. A year ago, there were 507 heat units recorded.

Washington State University’s AgWeatherNet charts growing degree days throughout the Evergreen State as well as parts of Oregon. Through May 31, there were 797 growing degrees days recorded at the Wahluke Slope station. A year ago, it charted 692 GDD.

The Pullman school’s station in Woodinville stood at 379 GDD, compared with 317 GDD in 2015. In the Columbia Gorge, Oregon’s Hood River County station already notched 499 GDD. A year ago, it stood at 385.

During May, part of Washington, Oregon and Idaho were 2-5°F above normal. Precipitation for this season ranges from 90 to 150 percent of normal for much Washington and Oregon, but dry conditions stretch from eastern Oregon into Idaho, Jones pointed out, adding they are likely to continue through August.

“Drought development is likely into eastern Oregon and much of Washington,” he wrote.

“El Niño conditions are essentially over in the tropical Pacific with cool surface waters emerging across the equator toward the central Pacific,” Jones wrote. “Prediction models are in agreement that this El Niño will continue to weaken and that La Niña development is extremely likely by fall.”

Unfortunately, the lingering of El Niño will perpetuate the increased cloud cover and nighttime humidity, which can make for unwanted mold in Northwest vineyards – might be reduced as tropical Pacific Ocean transition into La Niña.

“If the transition into La Niña conditions by fall materializes, the western U.S. would likely experience a colder and snowier winter,” Jones wrote.