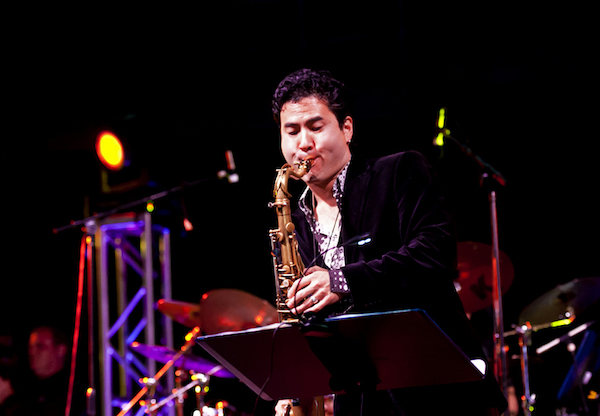 Seattle saxophonist Jeff Kashiwa is the headliner for the second annual Washington State University Wine and Jazz Festival on Saturday, June 25 at the WSU Tri-Cities campus in Richland. (Photo by Richard Duval Images)

Kashiwa headlines the second annual WSU Wine and Jazz Festival in conjunction with the Auction of Washington Wines as 25 wineries will pour to raise money for the school’s viticulture and enology program. Tickets range from $25 to $125 with the setting between the Columbia River and the state-of-the-art Ste. Michelle Wine Estates WSU Wine Science Center.

“Every time we have performed at wineries the people have been so receptive,” Kashiwa wrote in an email interview with Great Northwest Wine. “Spending a beautiful day at a winery puts everyone in a great mood. It’s the perfect combination – wine and music – especially jazz.”

This performance is one of the shorter business trips for Kashiwa, who grew up in Shoreline, Wash., and continues to call Seattle home. His fondness for Chateau Ste. Michelle includes a number of shows with The Rippingtons at the Woodinville winery’s acclaimed amphitheater.

Next month at Seattle landmark Jazz Alley, Kashiwa rejoins The Rippingtons and the group’s founding guitarist/keyboardist/songwriter Russ Freeman for six shows. Neither Kashiwa nor Freeman wear their hair as long – or feathered – as they did for their West Coast group more than 25 years ago.

“I am no longer a full-time member of the Rippingtons, but step in to do shows from time to time when my schedule permits,” Kashiwa wrote. “I am busy learning all the material from their new CD.”

Chart-topping success and demand soon prompted Freeman to tour in support of that studio work, and he recruited Kashiwa to The Rippingtons in 1989 when Fields left the group. Kashiwa earned immediate acclaim and remained with The Rippingtons for a decade.

This month, The Rippingtons release their 21st album in conjunction with their 30th anniversary, and it’s ironic that Kashiwa is stepping on to the Jazz Alley stage in place of Fields, who returned to the group and whose work is featured on the new True Stories album.

However, Kashiwa’s résumé and accomplishments allow him to stand out on his own. A product of the famed Berklee College of Music in Boston and graduate of Long Beach State, he has gone onto a successful solo career while also performing with his band Coastal Access, collaborating with standouts Steve Cole and Kim Waters to form The Sax Pack and teaching music technology at Shoreline Community College. Kashiwa’s solo projects traditionally debut in the top 10 on Billboard’s chart for contemporary jazz.

“I’m busy working on the next CD, which will be the 10th release of original material,” Kashiwa said. “My previous 10th CD was a “Best of,” so this is the real 10th solo CD.

“I have also been busy with The Sax Pack,” he continued. “We just finished our 10th anniversary tour last year and look forward to continuing the party.”

Despite the hectic schedule, the Shorecrest High School grad recently completed his sixth year of teaching at nearby Shoreline CC.

“It has been a wonderful experience, and I very much enjoy working with the students on all aspects of music,” Kashiwa said. “It is hard to balance touring and teaching. Many times I’ll head to the airport right after class on Thursday or Friday then return on Monday morning and head straight back to class!”

And it seems as if Kashiwa also is learning from the combination of tutoring and touring.

“I gain unique and positive perspectives from teaching and performing,” he said. “I focus on being more patient and helpful when out in a professional setting. While at school, I hold the students to a more professional level of conduct and performance. So both worlds complement each other.” 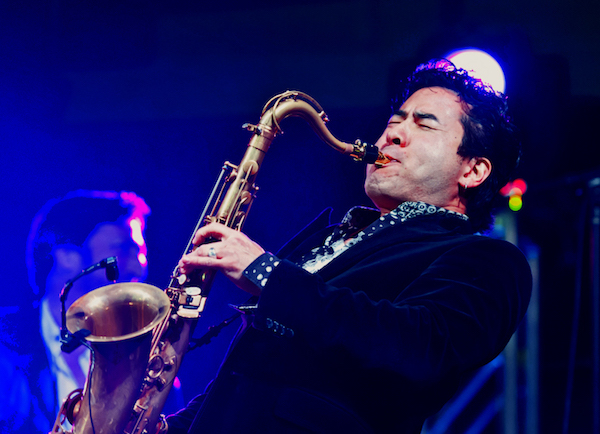 Fans of Kashiwa who make it to Saturday’s show should raise a toast to Michele Abrams, principal of BrightStar Entertainment in the Lake Washington town of Kenmore.

“Jeff is a longtime friend I’ve presented many times,” said Abrams, who plans to attend the Richland festival. “My company has presented contemporary jazz artists for over 20 years, and while I present all genres of music, jazz is definitely a passion.”

Abrams said she hopes to generate support for more shows in the Tri-Cities and throughout Washington wine country east of the Cascades.

“I’m personally excited to help the Auction of Washington Wines and WSU build upon and expand the Wine and Jazz Festival as there are limited outdoor venues in the greater Seattle area,” she said. “We, of course, have Chateau Ste. Michelle, however they do not allow independent producers like myself to utilize their stage for concerts. We used to have an annual jazz festival in Seattle that sold out every year, however our jazz radio station (KWJZ 98.9 FM) went away – and so did the festival.”

And if Saturday’s event at WSU is well-supported, there’s a chance for a headliner of Kashiwa’s caliber next year. Abrams works with a long list of Grammy-nominated jazz recording artists, including keyboardist and former Portland resident Jeff Lorber, Mindi Abair, Jonathan Butler, Euge Groove, Paul Jackson, Jr., Eric Marienthal – as well as Kashiwa’s The Sax Pack and Karukas.

“I have many relationships with jazz artists who are into wine – even produce and sell their own wine, like saxophonist Dave Koz,” Abrams said.