Dionysus Vineyard sweeps down toward the Columbia. Dionysus is part of Sagemoor Vineyards, one of the oldest and most respected vineyards in Washington state. (Photo by Andy Perdue/Great Northwest Wine)

As the hot 2016 vintage marches toward harvest, Washington wine grape growers are optimistic about quality, quantity – and just about everything else they see in their vineyards.

“We’re pleased with what we see this year,” said Lacey Lybeck, vineyard manager for historic Sagemoor Vineyards along the Columbia River. “We’re seeing average cluster size throughout all varieties. Our challenge is going to be balancing our crop and removing some of the excess clusters.”

The Sagemoor group includes Sagemoor, Bacchus, Dionysus, Weinbau and Gamache vineyards, and it provides grapes to more than 80 wineries – nearly 10 percent of the Washington wine industry.

Lybeck, who just celebrated her first anniversary managing this vineyard that dates back to 1972, said three weeks of cooler weather this month have brought the vineyard back to about where it was a year ago, when the historically hot 2015 vintage broke all kinds of records for early harvest.

“We were off to a big start,” she told Great Northwest Wine. “Buds broke two weeks early, but the past three weeks of moderate temperatures have slowed us down a bit. It looks like we’re about even with 2015 across the state.”

Interestingly, a year ago this week began a heat wave across the already arid Columbia Valley that saw triple-digit temperatures for a dozen days straight. And beginning Monday, temperatures in the heart of the Columbia Valley are supposed to reach the mid-90s – and break into the low 100s – for a 10-day period.

Lybeck hopes this stretch of hot weather will slow the vines a little, as they tend to “shut down” and go into survival mode when temperatures rise above about 95.

She did predict that veraison – when grapes begin to change color – could begin as early as July 4. Traditionally, veraison begins in the Columbia Valley around the first week of August.

“We’ve told our rosé customers to be ready,” she said.

According to Washington State University, 2016 is in a dead heat with 2015 as far as growing degree days (GDDs) – a measurement of how warm it is in each vineyard region. At WSU’s Prosser station, GDDs were at 881 as of June 19. A year ago, they measured 892. 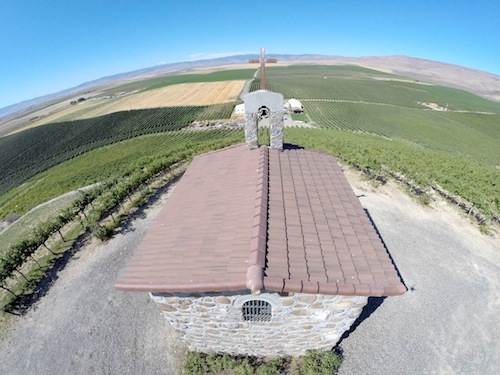 About 90 miles west of Sagemoor, Mike Sauer of famed Red Willow Vineyard is pleased with what he sees so far, noting that heat units – a measurement of how much warmth is reaching the vines – are slightly ahead of last year.

But he expects that to change.

“This has been a cooler week,” he said. “Last year at the end of June, we were in that 100-degree range. Hopefully, we can stay out of that for a while.”

Sauer is certain this will be an early harvest, just as it has been for the past three years. He is happy with the quality of the fruit he sees so far and the health of his vines.

“It all looks extremely good,” he said. “It’s better than the last two years.”

He said he doesn’t expect his crop to be any bigger. In fact, he has a lot of clusters on his vines, which gives him the flexibility to remove grapes later and provide his winemaking clients with the highest-quality fruit that he can grow.

Marty Clubb, owner and director of winemaker for L’Ecole No. 41 in the Walla Walla Valley town of Lowden, also was scouting his favorite vineyards in the Yakima Valley and is pleased.

“It’s looking good,” he said. “I’m hearing some say we’re ahead of last year and some saying we’re even, so there’s a little variability out there. It looks like another ’15.”

And he’s perfectly pleased with that.

“Our ’15 vintage turned out pretty strong.”

“We were harvesting a lot of fruit the last week of August,” he said. “I’ll be surprised if it isn’t the same this year.”

Clubb has noticed in the past couple of vintages – which have gone from hot to hotter – that nighttime temperatures have cooled off in August rather than September. As a result, the extra heat that has come in June and July hasn’t really affected quality. In fact, he said, late-ripening varieties such as Cabernet Sauvignon and Cabernet Franc love the combination of early heat and pre-harvest nighttime cooling.

At his estate Ferguson Vineyard in the southern Walla Walla Valley, Clubb sees a healthy crop.

“I haven’t seen any real issues to talk about,” he said. “We had relatively early canopy vigor, but the cooler weather the past few weeks has not been a bad thing.”

He said the good news is the clusters are healthy, and it will be easier to thin the crop to the level he wants later.

“We have all the options in front of us.”