A few Marquette grapes are turning purple at Champoux Vineyards in Washington’s Horse Heaven Hills. This is the earliest report of veraison taking place in Washington wine country. (Photo courtesy of Paul Champoux)

One Washington grape grower has found a few grapes turning purple in the Horse Heaven Hills – a full week ahead of last year’s historically early vintage.

Paul Champoux, who sold his eponymous vineyard and retired nearly two years ago, found a few purple berries in his beloved Marquette block on Thursday. A year ago, he reported finding the first signs of veraison on June 30.

“I had to look for them,” Champoux told Great Northwest Wine. “I found a few clusters with a little purple. The growth is way ahead of normal – whatever that is anymore. You just have to react to Mother Nature.”

While it isn’t surprising to see veraison – the French word for when grapes begin to change from green to purple or golden – first in Marquette, finding it the third week of June is unprecedented. Marquette is a cool-climate grape developed at the University of Minnesota to be able to handle harsh winter temperatures as low as minus-40.

Marquette is now grown across the northern part of the United States, from Maine to Washington state. The largest plantings of this relatively new variety are in Minnesota and Wisconsin.

While the upper Midwest is an area that needs winter-hardy grapes such as Marquette, Washington is a classic European wine grape region. Almost no hybrid grapes are grown on the West Coast. Instead, viticulturists and winemakers focusing on varieties such as Cabernet Sauvignon, Pinot Noir, Riesling, Chardonnay, Merlot and Syrah. 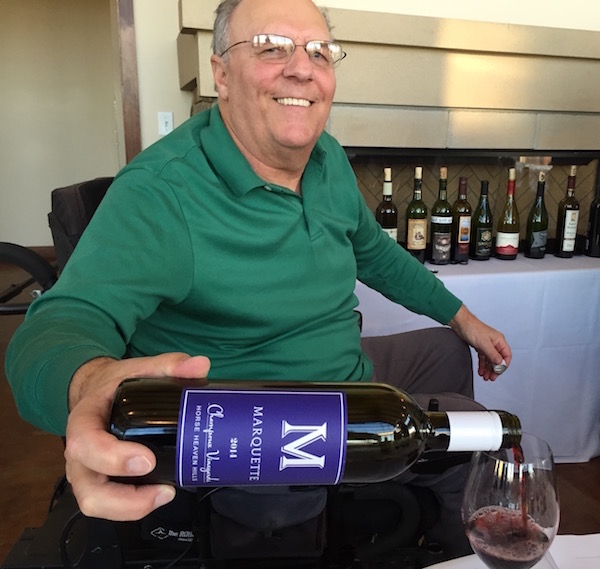 Paul Champoux retired in 2014 as vineyard manager of famed Champoux Vineyard, which is where he planted the obscure red grape Marquette as a tribute to his alma mater — Marquette High School in Yakima, Wash. His Marquette wines are made in conjunction with Charlie Hoppes of Fidelitas on Red Mountain. (Photo by Eric Degerman/Great Northwest Wine)

In 2011, Champoux decided to plant a half-acre of Marquette primarily out of nostalgia. He went to Marquette High School in Yakima, and when he ran across the variety in a catalogue, he thought it would be fun to plant.

In the first three vintages in which he’s gotten a crop – starting in 2013 – Charlie Hoppes of Fidelitas Wines on Red Mountain has made the wine. Many of the bottles have been shared with other Marquette producers across the country. In February, the Walter Clore Wine & Culinary Center in Prosser played host to a cross-country tasting of a dozen examples of Marquette.

Also in 2011, Mike Sauer of Red Willow Vineyard in the western Yakima Valley also planted Marquette. He chose to grow it because of the cool vintages in 2009 and 2010. He sells the grapes to Eight Bells Winery in Seattle.

While the small amount of Marquette now grown in the vast Columbia Valley is insignificant compared with classic European varieties, Champoux reports there is great interest in the red variety in the Spokane area, where winters can be harsh. He said one man who called him is planting 25 acres of Marquette and another is putting 60 acres into the ground.

In his first Marquette harvest in 2013, Champoux brought in less than a ton of grapes. In 2014, he harvested 1.6 tons. And last year, he had a little more than 2 tons. He expects more this year.

Last year, Sauer picked his Marquette on Aug. 6 – the earliest picking date in the history of Washington’s wine industry. (Rock Pocket Vineyard in British Columbia harvested Muscat on Aug. 7). Champoux’s Marquette came in Aug. 10. With veraison coming even earlier this year, Champoux wonders if harvest could even start in July this year.

That math might just work out: Last year, it was five weeks from the first sign of veraison to harvest. If that holds true this year, the Champoux Marquette could be picked in the waning days of July.

More ‘veraison’ on way in Washington 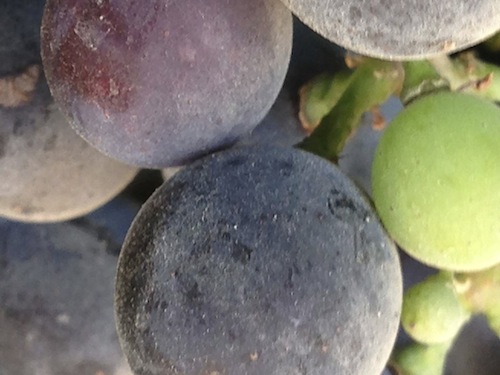 This cluster of Malbec goes through veraison in early August 2014 at Col Solare’s vineyard on Red Mountain. (Photo by Niranjana Perdue/Great Northwest Wine)

While it might be easy to discount veraison showing up so early in a hybrid such as Marquette, grape growers say it isn’t far away in more traditional varieties in Washington.

Lacey Lybeck, vineyard manager for Sagemoor Vineyards north of Pasco, told Great Northwest Wine last week that she would not be surprised to see veraison as early as July 4.

“I’ve told our rosé customers to be ready,” she said.

In a normal year – with 2012 being the last typical vintage in Washington – veraison begins in late July or early August. Lybeck said veraison for most varieties is at least a few weeks away. But if this warm vintage continues to trend to actually be ahead of last year’s historically hot summer, she wouldn’t be surprised to see it early.

Last year, Lybeck found veraison a few days after July 4. And later that week, growers across the Columbia Valley began reporting purple berries – even in relatively cool areas of the Yakima Valley.

Though three weeks of somewhat cooler temperatures have brought this year back to about the same amount of heat as last year, the next 10 days are expected to reach anywhere from the mid-90s to low 100s. That could help push more grapes into showing color change.

And once veraison gains steam in vineyards, Washington winemakers begin preparing for their 60-day sprint through harvest.