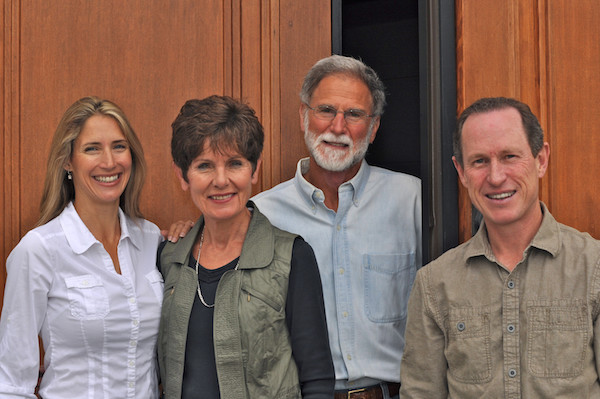 For the past five years, the team at Betz Family Winery has transitioned with new ownership. From left are Bridgit Griessel, Cathy Betz, Bob Betz and Steve Griessel. Bob Betz has now stepped into a consulting winemaker role at the winery he and Cathy launched in 1997. (Photo courtesy of Betz Family Winery)

WOODINVILLE, Wash. – It has been five years since Bob and Cathy Betz stunned Washington wine lovers with the announcement that they had sold acclaimed Betz Family Winery.

A half-decade later, the winery is evolving under the ownership of Steve and Bridgit Griessel, the South African expats who continue to throw all of their considerable energy into learning the wine business.

Meanwhile, founding winemaker Bob Betz has slowly stepped away from the heavy lifting of running a winery since he announced in April 2011 that he and Cathy had sold the winery they began in 1997.

Today, Betz Family Winery doesn’t look a lot different than it did five years ago. It’s still at the same address just five minutes up the road from Chateau Ste. Michelle – where Betz began his storied career in the wine industry. Betz’s classic wines based on Bordeaux and Rhône varieties remain the focus, and they still gather the same acclaim – if not more – from wine critics worldwide.

But the Griessels have begun to add their own touches to the winery and are slowly building upon the Betz legacy while quietly adding their fingerprints. In the cellar, Betz has been joined by Louis Skinner, who now is succeeding him as head winemaker.

Steve Griessel still is in awe that he was able to purchase the winery. It had long been his goal to enter the wine industry, and landing at Betz was beyond even his lofty expectations.

“We couldn’t ask for better,” he told Great Northwest Wine.

From South Africa to Woodinville 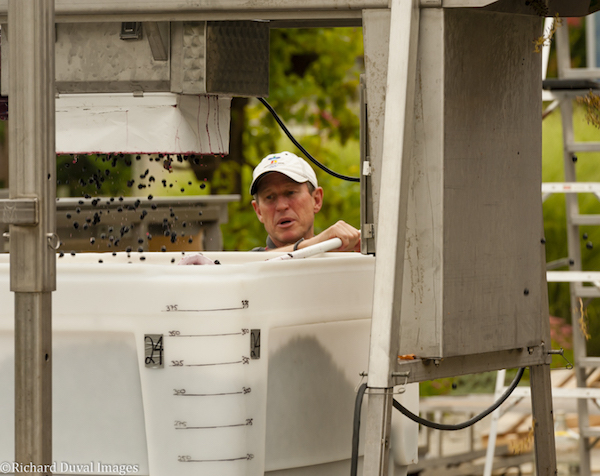 Since purchasing Betz Family Winery in 2011, Steve Griessel has thrown himself into learning the wine industry. (Photo by Richard Duval)

Griessel, 56, grew up in South Africa. He started his first business when he was 25. He was broke at the time but managed to put together partnerships to build a series of businesses in the hospitality business, primarily in resort management and tourism.

Along the way, the couple became entranced by wine.

“We’ve traveled the world of wine,” Griessel said. “We’ve always collected wine and have been to the four corners of the Earth to meet winemakers. We are fascinated by wine.”

Fourteen years ago, the Griessels moved to the United States. He was tapped by American Community Properties Trust to restructure the company and take it from being publicly traded to being privately owned. Once he was able to complete that task, the couple became determined to get into the wine industry.

“We were really dreaming to get to the other side of that transaction, then we would spend a year looking for a winery,” he said. “During that journey, we were lucky to meet Bob and Cathy. We were fortunate enough to be the winners of their business.”

The purchase included the Betz’s home, which sits 100 yards up the hill, overlooking the winery and the Sammamish River.

“It made the most sense to do that and live in the house,” Griessel said. “It’s a very hands-on business. Sometimes, you’ve got to be there in the middle of the night.” 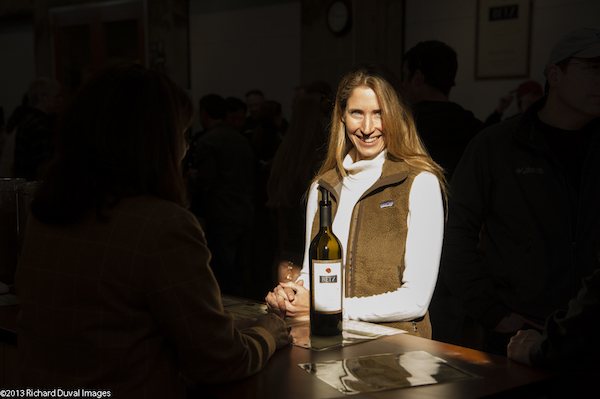 Bridgit Griessel is co-owner of Betz Family Winery in Woodinville, Wash. She works on the technology side of the business. (Photo by Richard Duval)

Griessel has been quick to learn the wine business, jumping in to do everything from bringing in grape samples for analysis to helping on the bottling line.

“I’ve thrown my life into this,” he said. “I can’t wait to get into the vineyards. I put 6,000 miles on my truck during harvest. Today, I feel so comfortable doing that because I’ve leaned on all of our growers. They’ve all been so incredible to me. I ask a lot of questions, and they’ve been willing to answer them. When you spend a lot of time out there, you can learn a lot.”

And he gets to work alongside Bridgit, who is primarily behind the scenes to make sure the business runs as it should.

“She’s an absolute superstar,” he said. “She’s added tremendous value to the business over the past five years with a completely integrated technology platform for people to come in and buy wine and interact with us.”

Griessel was at the now-famous 2013 Red Mountain land auction and was actively looking to purchase a site for an estate vineyard in Washington’s smallest and most important American Viticultural Area. Like more than two-dozen other hopefuls, he was outbid by the Aquilini family, which bought 670 acres of land that day for $8.3 million.

Undeterred, Griessel purchased land in SeVein, a 2,700-acre development in the southern Walla Walla Valley near Milton-Freewater, Ore. He teamed up with Kevin Brown of Siren Song Wines in Chelan to purchase 40 acres in SeVein, of which 23 acres were plantable. The Betz vineyard was planted this spring to 11.5 acres of mostly Cabernet Sauvignon, along with Merlot and Petit Verdot.

In addition, Griessel and Brown quietly bought Old Stones, a 13-acre property in the Rocks District of Milton-Freewater, not far from SeVein. The vineyard has 11.5 acres of vines, primarily Syrah, and the Griessels own a bit more than 5 acres.

“We’re still learning about The Rocks,” he said. “The winemaking and viticulture are very different than other parts of Walla Walla.”

Syrahs from the Rocks District are acclaimed for their wild and unusual qualities, and Griessel can see a day when Betz adds a fourth Syrah to its lineup.

“We think there should be a small-batch wine to come out of the Rocks.” 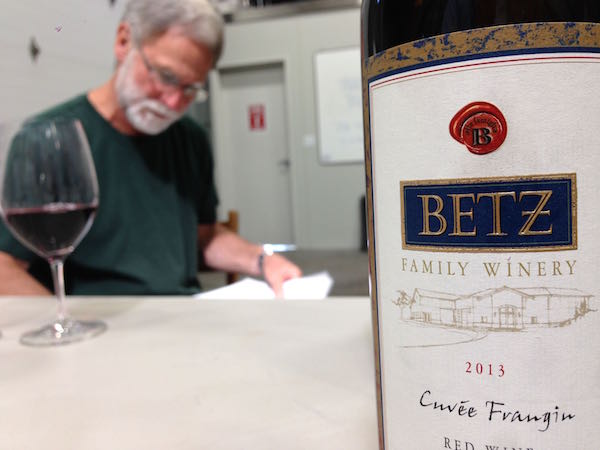 Bob Betz, founder of Betz Family Winery, is known for his meticulous note-taking on every wine he’s made in his storied career. (Photo by Andy Perdue/Great Northwest Wine)

Bob Betz, 67, has enjoyed a magical career. It began in the 1970s when he and Cathy spent several months in Europe’s classic wine regions. During that time, the young Betz knew he wanted to make a career in wine.

When they returned to the United States, he took a job in wine retail before being hired by Chateau Ste. Michelle in October 1975, back when it was on East Marginal Way in Seattle. He started Jan. 1, 1976, several months before the Woodinville chateau officially opened to the public.

In 1980, Betz was accepted into medical school, though he ultimately declined because he knew in his heart that wine could lead to a much more interesting life.

“I look back on 28 years at Ste. Michelle with nothing but great memories,” he said. “I learned so much. That gave me the impetus to do the Master of Wine (which he earned in 1998), then to get back into the vineyard, which is where my heart was in the beginning after having spent that year in Europe.”

Betz’s undergraduate degree from the University of Washington had nothing to do with the wine industry, and his naturally inquisitive mind knew he wanted to do something academic within the wine industry. Today, he is the only Master of Wine in the United States who also is a winemaker; most of the rest are educators, retailers and writers.

In 1997, while still an executive with Ste. Michelle Wine Estates, Betz launched Betz Family Winery in Woodinville’s Warehouse District. The early wines earned great acclaim, and by 2003, he was ready to retire from Ste. Michelle and invest all of his efforts into the family winery.

“The lessons learned at Ste. Michelle were so valuable,” he said. “I was able to apply what I learned on a much smaller scale. I joke with (Ste. Michelle CEO) Ted Baseler that they spill more wine than I make.”

Through the years, Cathy also has been heavily involved, handling the business end of winery and, for a few years, importing olive oils and balsamic oils from Italy to sell to Betz customers.

Moving on with new ownership 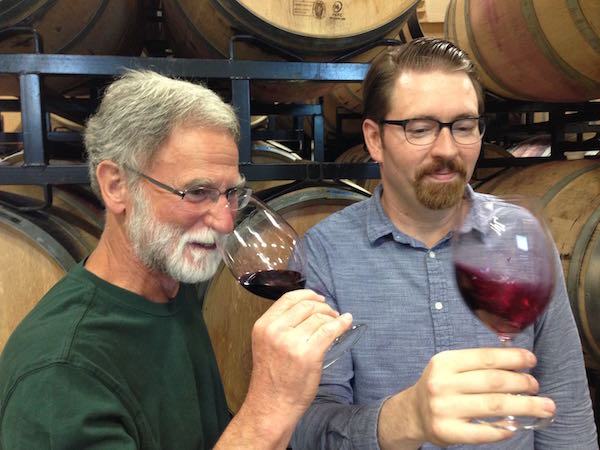 Even with all the success, the Betzes knew they needed a succession plan – a plight many small family wineries face. They looked with admiration at similar wineries, including Leonetti Cellar in Walla Walla and Quilceda Creek in Snohomish, because the second generation was in place and successful.

But that wasn’t going to happen with Betz. Their daughters loved the business their parents had started, but they weren’t going to take it over.

“We decided to look at what the next chapter would be,” Betz said.

They chose the Griessels in no small part because they were another family with passion and energy. When the announcement was made five years ago, the news shook the Washington wine industry, and Steve Griessel knew he would have to work hard to gain trust.

“Initially, there was a lot of trepidation when Bob and Cathy made the announcement,” he said. “We were complete outsiders. We were from South Africa.”

But as the Griessels settled into their new home in the Pacific Northwest, the wine industry embraced them.

“The reception we got from everybody has been overwhelming,” he said. “Bob has been an incredible mentor. What’s nice is we’ve become close friends. It’s not often that happens with someone who sells 100 percent of their business.”

During the change in ownership, Betz has stayed firmly in charge of the cellar, though he has slowly stepped away from the heavy lifting. Until last month, he was the head winemaker.

But with his five-year contract concluding in mid-June, there was speculation about whether Betz would continue on or retire. He told Great Northwest Wine this spring that he is more than happy to maintain a role at Betz Family Winery, though now as consulting winemaker.

In this role, little is likely to change. Betz still will oversee vineyard strategies, sensory evaluation and blending. He is undoubtedly intrigued by the new estate grape sources from the Oregon side of the Walla Walla Valley.

Succeeding Betz at the helm is Louis Skinner, a South Seattle College wine program grad who spent three years at DeLille Cellars before arriving at Betz more than two years ago and taking on the role of assistant winemaker. He now moves into the head winemaking role, a venerable position for any wine industry veteran.

“It’s time,” Betz said. “The next chapter begins, plus I feel really good about the hands the winery is in with Louis. He has global vision, and he’s so diligent in his approach. We have a wonderful working relationship.”