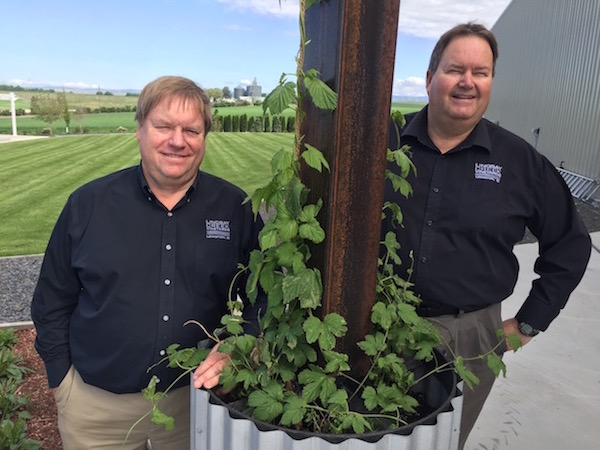 LEWISTON, Idaho – It might catch visitors by surprise when they drive up to Lindsay Creek Vineyards and find it in the middle of wheat fields on the outskirts of Lewiston, Idaho.

Art McIntosh grew up surrounded by wheat, but he can understand the puzzled looks of those expecting to taste award-winning wine.

“My brother Doug and I are fourth-generation wheat farmers in the Lewiston area, growing wheat, peas and barley our whole life, so this was an extension of it,” Art said. “We both love wine and always have enjoyed wine.”

They factored in the history of viticulture in the Lewis-Clark Valley, looked at the amazing transition from wheat to wine 120 miles to the west in the Walla Walla Valley, got a bank loan for vinification facility and took their shot in 2013.

“We were watching what they are doing in Walla Walla, growing grapes in the middle of a wheat field, which we didn’t know you could do,” he said. “We weren’t sure the chemicals wouldn’t kill the grapes, and we were surprised how well they did. That gave us hope, and that’s why my brother first put vines near our farm.”

And with that, in 2007, the McIntosh brothers started down the path to Lindsay Creek Vineyards. Their plantings span 15 acres, and their 3,500-case showpiece winery is a new tourist destination for the Lewiston-Clarkston area.

“We’re only a mile and a half outside of the Lewiston city limits,” Art said. “We’d like to think we’re miles away as far as the feeling goes because we don’t have any buildings or houses around us. We don’t have any neighbors to complain about noise.”

We recently visited Art McIntosh at his winery in Lewiston near Mann Lake.  Here’s the interview: 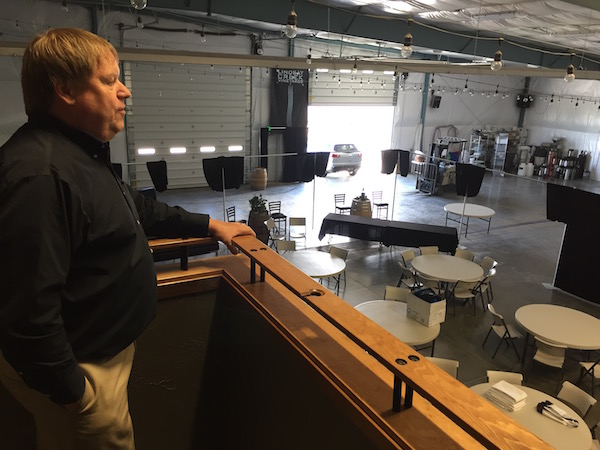 The Clearwater Economic Development Association enjoys pointing out to tourists the cluster of award-winning wineries within a 30-minute drive in the Lewis-Clark Valley.

In the historic Lewiston Orchards, eight miles to the west of Lindsay Creek Vineyards, is the estate vineyard and second home of Clearwater Canyon Cellars. Four miles beyond and across the Snake River in Clarkston, Wash., there’s Basalt Cellars. Up the Clearwater River, 30 miles to the east, in Juliaetta is Colter’s Creek Vineyards & Winery.

“This is a tremendous area for growing grapes, and I think we’re going to prove that,” McIntosh said.

On April 20, the brothers played host to the CEDA’s annual meeting, which focused on the Lewis-Clark Valley American Viticultural Area, formally announced that same morning by the federal government.

“I think it’s going to create a lot of marketing opportunities for the area,” McIntosh said. “Lewiston was the original wine-growing region in the Northwest, back in the 1800s, and we’re coming back to our roots.”

More than 400 people attended the celebration, orchestrated by CEDA.

“That has been the conduit in helping us develop the wine alliance for the Lewis-Clark Valley AVA,” he said. “They sponsored the event and helped celebrate the AVA.”

The young Lindsay Creek plantings fall within the new AVA, a boundary including the canyon walls, stretching to 2,000 feet in elevation.

“The people who developed the AVA made sure we were included,” he said.

Remarkably, Art had one of the wine world’s most famous figures critique one of his early wines, and it was captured on YouTube for all the world to see. Ian Cauble swirled, sniffed, spit and swallowed the 2010 Harvest Ridge Red Blend, Art’s not-so amateur effort from Yakima Valley vineyards. Not long after, Cauble emerged as one of the stars from the documentary Somm.

“At that time, he was the youngest master sommelier in the world,” Art said. “They were releasing the movie that summer, and Ian was in Coeur d’Alene on his way to Boise or McCall and a friend of ours said, ‘You need to stop by and visit these guys that are starting this thing up.

“All we had at that time was hobby wine,” Art smiled. “We invited Ian and some of our friends to come out here and visit with him. It was quite an experience with a master sommelier because when you learn about that program, you learn just how unique those people are and how gifted they are when it comes to wine.”

Perhaps the most important of Cauble’s comments of Art’s wine was, “It makes you want to drink more.”

Based on the setting, it was understandable for Cauble to playfully guess that it was an Idaho wine. Give him partial credit for that.

“We were very flattered,” Art said. “That was a co-fermented Cab-Merlot blend, if I remember, and he was very, very generous with us. I hope we can continue to live up to that, and I hope that he meant it.“

Brothers go back to school 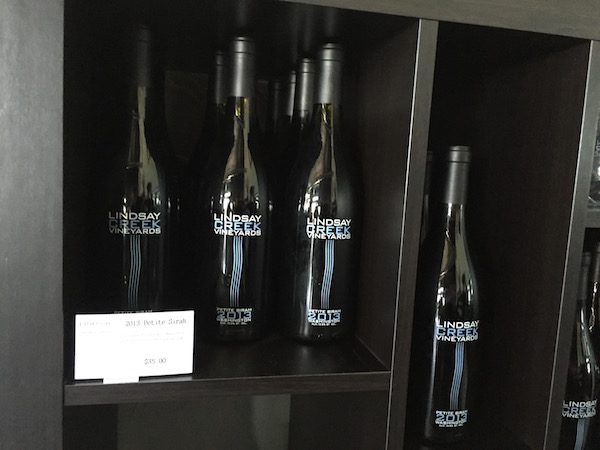 To help make their new project work, they both took classes at Washington State University, Art for winemaking and Doug for grape growing, which helped them get into some vineyards.

“Doug worked really hard cultivating those relationships,” Art said. “He met some of them through his time at Washington State University going through the viticulture program.”

And the brothers have had to prove their worthiness to some of those growers.

“They wanted to make sure we weren’t some flash in the pan or make some swill with their fruit,” Art said. “We needed to show them we were for real. The growers take as much pride in the grapes they grow as I do in the wine I make.”

The science behind fermentation wasn’t new to Art, who already had a distiller’s permit.

“I’ve played with distilling since I was an 18-, 19-year-old,” he said. “I’m made a lot of beer as a hobby, so this was the natural progression. We’d seriously considered opening a brewpub in downtown Lewiston, but at this point we’ve decided to invest in the winery. Maybe the brewpub will come along later.” 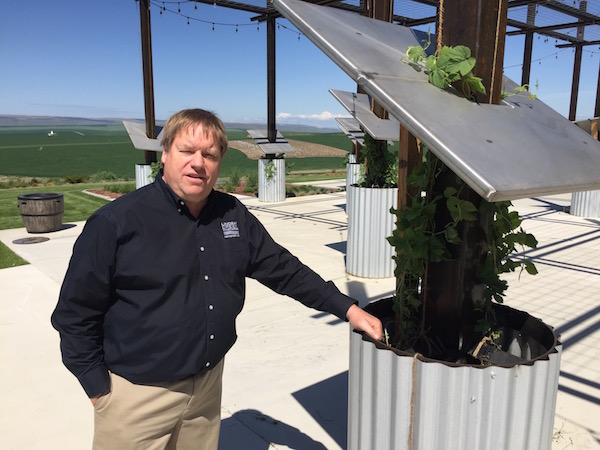 Art McIntosh plants hops on the patio at Lindsay Creek Vineyards to grow into the pergola and provide shade for wine-sipping and beer-drinking patrons. (Photo by Eric Degerman/Great Northwest Wine)

The McIntosh brothers serve as an excellent example of what the wine industry can offer, even to those who don’t drink wine. Their modern, expansive and comfortable tasting room includes roll-up doors to a large pergola-covered patio. Between the wheat fields on the horizon are bocce courts featuring crushed Puget Sound oyster shells.

“It seems to go really well with wine and people drinking wine,” he said. “We’re out in a rural setting so it’s easy to do, and we have the room to do it.”

There’s a large lawn for wedding vows and the 400-seat event space for wedding receptions. It might get a bit sticky during harvest because the event space doubles as the production area for the winery.

“We will do more than 20 weddings this year, almost every weekend until the end of October,” Art said. “I’m doing them through crush with the idea that we’ll be fermenting grapes in the building during that time. We’ll make sure those weddings aren’t that big so that we can have production going on the side.”

During the summer, the patio is the place to be. Stay long enough, and you’ll be able to see Art’s hops reach for the sun. They can grow as much as 6 inches a day during the first part of summer.

“I wanted to incorporate table tops with hops growing through the center of them as a conversation piece,” he said. “I do have some Cascade hops growing out the table tops and the posts that hold up the pergola. These provide a lot of shade for this west-facing tasting room. That’s one of our issues in the summer with all the heat we get in the valley.”

A retail outlet for organic grain, too 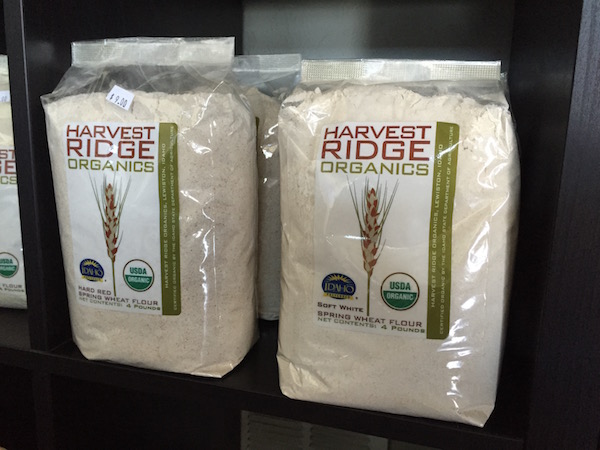 Harvest Ridge Organics grain products are the core of the McIntosh multi-generation farming operation, and some are available in the tasting room of Lindsay Creek Vineyards in Lewiston, Idaho. (Photo by Eric Degerman/Great Northwest Wine)

In addition to the wines, the Lindsay Creek tasting room also offers some of the McIntosh family’s Harvest Ridge Organics products. The grain silo for their organic farm and milling operation is just east of the winery.

“The farm is still paying for a lot of the winery,” Art said. “Hopefully, that’s going to be turning around in the next year or two.”

“We have a number of different products you can buy that are all USDA certified organic,” he said.

There’s little doubt, though, that there is passion behind Lindsay Creek Vineyards.

“Without talking to my brother, who is my business partner, I would love to move up toward the 7,000-case range in the next 10 years,” Art said. “If I was put that down on paper, it would be in pencil.”

Prohibition dried up wine production when Kenneth McIntosh, the first generation of their company, began farming in the area. Now, the wheat ranching brothers have made a sizable investment in the renaissance of the Lewis-Clark Valley wine industry.

“I’m sure I’ll never pay this off in my lifetime, and I’d be kind of disappointed if I did,” Art chuckled.