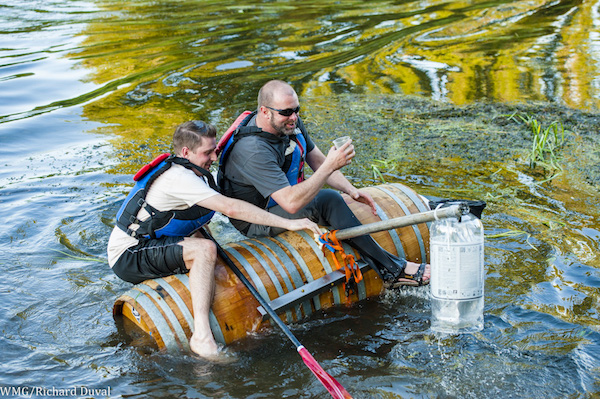 John Patterson of Patterson Cellars uses wine barrels as a flotation device for the kayak portion of the Woodinville Winemaker, Brewer and Distiller Triathlon. (Photo by Richard Duval Images)

WOODINVILLE, Wash. – The beneficiaries have changed, but the conviviality continues this week and beyond as the Woodinville wine industry remains focused on raising money to assist ailing children.

“It’s a great draw for people to come out and see the wineries interact together,” said event founder John Bigelow, winemaker/co-owner of JM Cellars. “It’s so much different than what you see in Napa, where most of them are that friendly together. In fact, they are probably suing each other. We’ve got great camaraderie in Washington.”

Spectators are invited to watch and inspire more than 30 teams of winemakers, beer brewers and craft distillers as they run, cycle and paddle to raise money for The Goodtimes Project, a children’s no-cost oncology camp for patients, survivors and siblings affected by cancer.

More than 300 participants, including Bigelow and Bob Betz of Betz Family Winery, will run (3.24 miles), bike (6.72 miles) and the kayak (0.5 mile) to raise money for The Goodtimes Project, an organization that helps make life a bit more enjoyable for children with cancer.

Admission is $30 per person. There will be wine, beer and spirits available as well as food for purchase from executive chef Bobby Moore’s Barking Frog mobile kitchen. 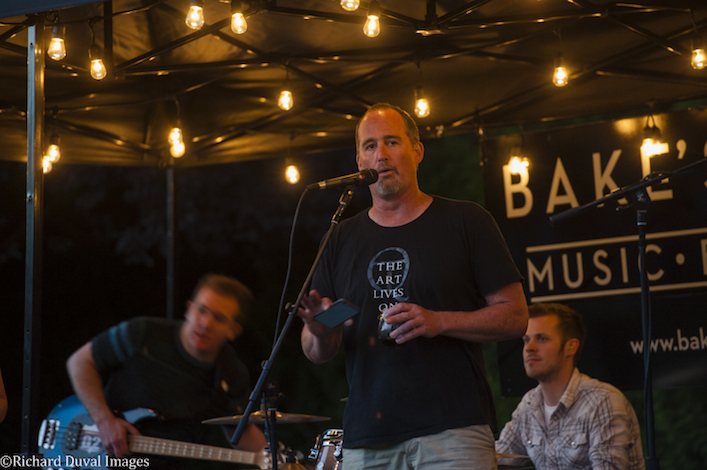 John Bigelow of JM Cellars founded in 2009 what is now the Woodinville Winemaker, Brewer and Distiller Triathlon. Bigelow continues to help orchestrate the event, which has raised more than $30,000 in the past two years. (Photo by Richard Duval Images)

Bigelow helped launch the first iteration of the winemakers’ triathlon, which began in 2009 as a fundraiser for the Mitochondrial Research Guild of Seattle Children’s Hospital. He’s been on the ground floor of that program since it started in 2003.

“We wanted to put together a fun triathlon, one that wouldn’t make anyone sweat too much, but if you are competitive, go for it – just have fun,” Bigelow told Great Northwest Wine.

Bigelow’s event operated with a simple rule, “There really are no rules.” His idea took off, raising $17,000 for the Mitochondrial Research Guild.

“We charged $125 a head for people to come and watch the winemakers compete,” he said. “The wineries all contributed wine with great support from Willows Lodge and Red Hook, and the after-party was at JM. It was a really fun event, so much better than even I dreamed it could be.”

The second year raised another $15,000 for that portion of Seattle Children’s Hospital, but orchestrating the event and lining up 50 volunteers proved to be a drain on the guild, particularly compared with a fundraising auction organized by a handful of staffers that can raise beyond $200,000.

“They told me, ‘We love what you have done for us, but the number of volunteers needed is a huge commitment for our organization,’ ” Bigelow said.

The Winemaker Olympic Festival brought similar hilarity from the likes of Bigelow and Betz, but the lighthearted triathlon went dark for a time until last year.

“Sandra Lee with Woodinville Wine Country re-energized it, and it was a lot of fun,” Bigelow said

The focus, while still on children’s care, transitioned to a new beneficiary, Camp Goodtimes.

The Woodinville Wine Country team has helped spearhead the effort with its organizational skills, marketing machine and pool of ready-to-work volunteers. Bigelow put the two organizations together after learning of the work doing by The Goodtimes Project through his continued association with Mitochondrial Research Guild.

The Goodtimes Project is a nonprofit group serving children battling cancer, survivors and their siblings from Western Washington and Alaska by providing programs such as Camp Goodtimes, a cost-free summer camp for 250 children each year.

Winemakers, chefs ham it up for charity 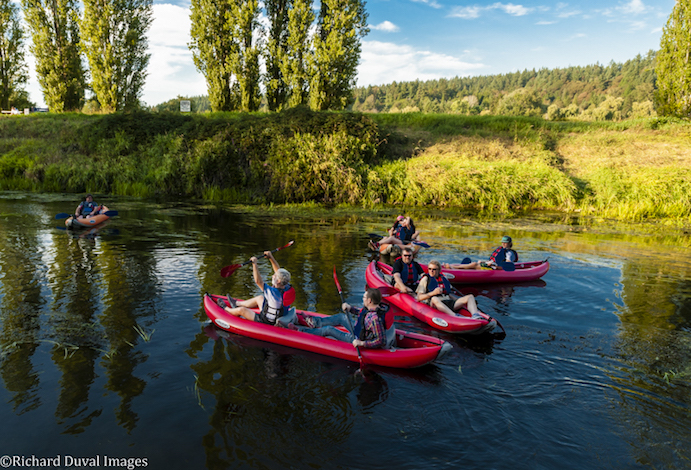 The kayak portion is the final leg of the annual Woodinville Winemaker, Brewer and Distiller Triathlon. (Photo by Richard Duval Images)

The children attending Camp Goodtimes are the real champions of this triathlon, but there is some scorekeeping involved among the Woodinville wine community.

“Bobby Moore passed me in his kayak to win the race last year,” said Bigelow, who is attempting to summit Mount Rainier for the second time this week. “It is just a blast. People are just laughing the whole time, and it’s great when you people out of their element – out of the winery.”

Regardless of who crosses the finish line first, be prepared to see photos of winemaker Chris Gorman declaring himself as the champion.

“The tradition is for Gorman to find out where the trophy is, and then he takes a picture of his team with the trophy and then later claims that he’s the winner,” Bigelow said. “It’s very Chris.”

Moore has been a mainstay, and Betz doesn’t mind getting soaked for a good cause.

“To raise a bit of extra money, Bob agreed to sit in the dunk tank,” Bigelow said. “Bob sat in that dunk tank for over an hour as people paid for the chance to dunk him. He’s been a great friend to the event.”

Back in the day, Bigelow seized upon the concept of anarchy and brought in a ringer.

“The second year, we really wanted to win the thing, so we brought on to the team an exchange student from Belgium who worked on bottling line a day,” Bigelow said. “We made him an official part of the winery. He was a national cycling champion in Belgium.”

As is tradition, the team triathlon event ends on the river.

“There are five or six people on each team, and they should be semi-affiliated with the winery, but the winemaker or brewer or owner has to be in the kayak – or nonmotorized water vehicle – at the end,” Bigelow said. “John Patterson always straps together two or three (wine) barrels and paddles in. He’s never won it, and he’s only finished the race once. Last year, he was in a super-sophisticated barrel and sunk.” 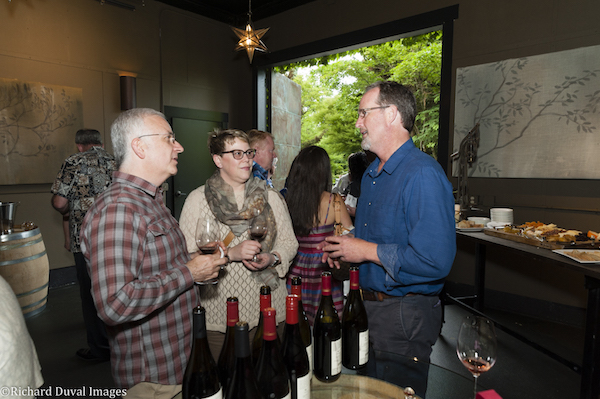 JM Cellars, owned and operated by winemaker John Bigelow, is one of the oldest wineries in Woodinville. (Photo by Richard Duval Images)

It was 1998 when Bigelow and his wife, Peggy, launched JM Cellar – the “M” references Peggy’s given first name, Margaret. In a sense, John married into the Washington wine industry. His brother-in-law is Mike Januik, former head winemaker at Chateau Ste. Michelle with a long career as winemaker for nearby Novelty Hill and Januik wineries.

“And my nephew is Andrew Januik,” Bigelow added with pride.

JM Cellars established its tasting room in 2000 atop a 7-acre wooded area platted by the city as Bramble Bump, and the Bigelows couldn’t resist continuing the reference. The peaceful hill that’s home to maples and rhododendrons offers a remarkable getaway from the wine-country traffic on Woodinville-Redmond Road.

“About four months ago, Peggy and I counted 52 tasting rooms within a mile of us,” Bigelow said.

From Walla Walla to Woodinville 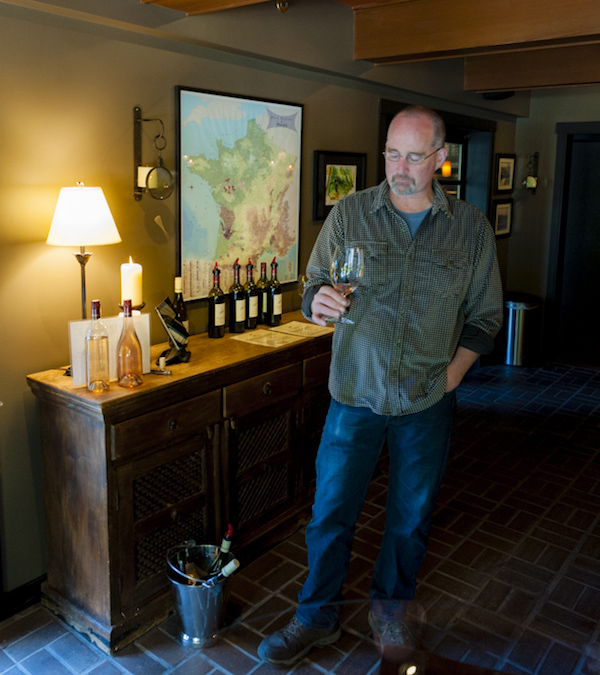 John Bigelow began making wine in 1998 in the basement of his home in the Seattle neighborhood of Laurelhurst. (Photo by Richard Duval Images)

Some of the early JM Cellars wines were made in Walla Walla with the help of Mike Januik, Charlie Hoppes (Fidelitas) and Holly Turner when all three were onboard at Three Rivers Winery.

“It was great,” Bigelow said. “I got a chance to work with some of the great winemakers of Washington, including Marty Clubb (L’Ecole No. 41) and Gary Figgins (Leonetti Cellar) and Norm McKibben (Pepper Bridge Winery). And in 2006, I got a call from Gary asking me if I wanted to be a part of a vineyard project they were working on.”

As a result, Bigelow and his wife, who met while both were employed at IBM, established Margaret’s Vineyard in the SeVein project near Milton-Freewater, Ore. Those 16 acres of vines in the Walla Walla Valley make up about 30 percent of his portfolio. His fruit sources are impeccable, including three sites on Red Mountain – Klipsun, Shaw and Quintessence – Boushey, Champoux, Conner-Lee, Stillwater Creek and The Benches.

“This will be our 19th harvest, and I don’t want to be the size of Chateau Ste. Michelle,” he said. “Our production is at 5,000 cases a year, and we’ve been at that level for the last seven years. We sell 95 percent of wines through the winery, and we have an incredible family here at JM – employing 19 people. We sell out all of wine, which is the key piece.”

The 2016 harvest will mark the 10th since Bigelow ultimately left the technology world to focus on JM Cellars.

“It’s been 10 years now, and hopefully I don’t have to go back to that world,” he continued. “Besides, I can’t remember any of the acronyms from the high-tech sector. These days, about the only acronym I known anymore is MOG – material other than grapes.”