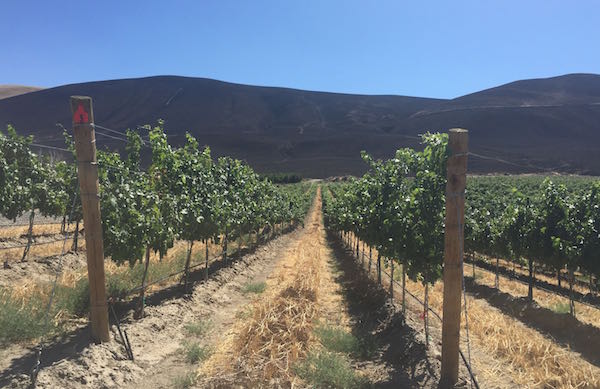 Skyfall Vineyard, owned by Precept Wine in Seattle, sits just below the aftermath of a 4,000-acre wildfire. The blaze threatened the vineyard before it was brought under control. (Photo by Niranjana Perdue/Great Northwest Wine)

KIONA, Wash. – A 4,000-acre wildfire near Red Mountain threatened one winery and smoked a handful of Chardonnay vines before being brought under control early this morning.

Fifteen agencies battled the blaze, according to the Tri-City Herald. It came within about 100 yards of Anelare Winery in the unincorporated community of Kiona, which sits across the freeway from famed Red Mountain. The fire started about 5 p.m. Thursday near Yakitat Road in the Yakima Valley and was brought under control about 4:30 a.m. today.

Kim Gravenslund, general manager of Anelare, said she did not know the cause of the fire, which came within a few hundred feet of the winery.

“It was moving fast,” she told Great Northwest Wine. “It was a pretty intense fire.”

Gravenslund drove to the winery about 11 p.m., and the entire southern side of Interstate 82 was lit up by flames. Anelare opened its Kiona tasting room two summers ago.

Across the road from Anelare and north of an irrigation canal is Skyfall Vineyard, owned by Precept Wine in Seattle. David Minick, director of vineyards for Precept, said the 125-acre vineyard was threatened by the flames and a handful of Chardonnay vines were singed by the blaze, which came within fewer than 100 feet of the southern edge of the vineyard.

A Benton County firefighter was walking along the canal Friday afternoon, looking for hot spots amid torched sagebrush.

Gravenslund said the fire didn’t seem to be hurting business. In fact, she said the tasting room traffic has been brisk.

Winemakers watch blaze from across river 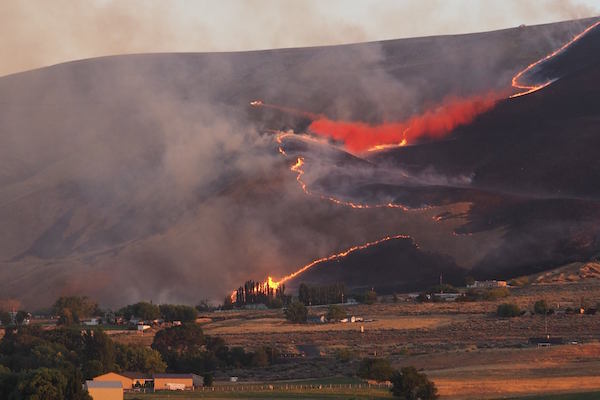 Firefighters drop retardant on flames that threaten Anelare Winery and Skyfall Vineyard along the northern flanks of the Horse Heaven Hills in the lower Yakima Valley near Benton City, Wash., on Thursday, July 14. (Photo courtesy of Larry Oates)

Larry Oates of Sleeping Dog Wines in Benton City monitored the fire from his winery across the Yakima River.

“It was charging to the west, and somewhere around nightfall the dynamics changed,” Oates said. “The wind came from the west and pushed the first to the east like a racehorse.”

Oates said he was impressed by the courage of firefighters who were touching off the backfires above Anelare.

“They were running almost vertically up the hill with their cans of kerosene, with the fire line maybe 30 feet away from them,” Oates said.

Oates said he couldn’t help but remember the evacuation of the entire town of Benton City in the face of the massive fire of June 2000 that scorched 163,000 acres on the Hanford Reach National Monument and burned 25 homes in Benton County.

“This never crossed the freeway, and it looked closer that what it was,” Oates said. “And we had about 1,000 acres of nicely irrigated alfalfa between us and this fire.”