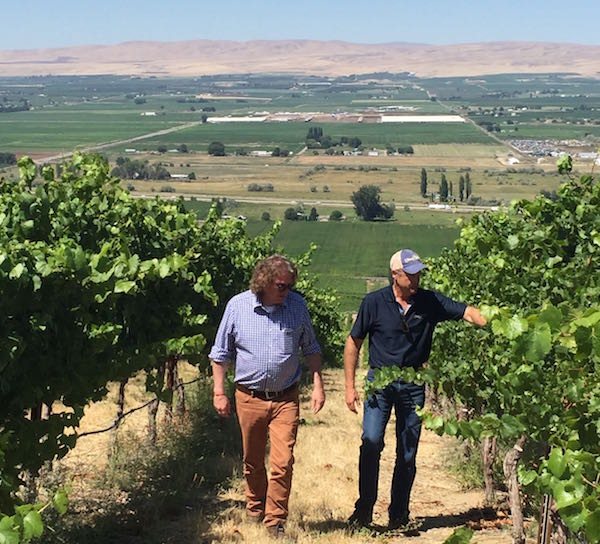 Ernst Loosen, left, of Germany and Bob Bertheau of Chateau Ste. Michelle walk through a vineyard atop Snipes Mountain on Thursday. The two collaborate to produce Eroica Riesling each year. (Photo by Andy Perdue/Great Northwest Wine)

Life is looking up in the state of Riesling.

After a few years of stagnant sales, Riesling is regaining its momentum.

“It’s better than it was three years ago,” said Nicolas Quille, general manager and head winemaker for Pacific Rim. “In the past six months, we’ve been seeing an acceleration in Riesling.”

Pacific Rim, which produces 170,000 cases of Washington Riesling annually, said sales of U.S. Riesling have been down by as much as 3 percent but now are up a bit. Quille said that as the Moscato craze that swept across the country has waned, Riesling sales have come back.

“Riesling is down overall as a category,” he told Great Northwest Wine. “We’re still up in single digits. It’s not the growth we would like, but it’s still positive. We’re bucking the overall trend.”

Bertheau and Quille said sales of imports – particularly German Rieslings – are down considerably, but domestic Riesling is ahead. And that primarily means Washington, which is the largest Riesling-producing state in the country.

In addition to all the Riesling that Chateau Ste. Michelle makes, other brands within Ste. Michelle Wine Estates also produce Riesling, including Columbia Crest, 14 Hands, Anew and Snoqualmie.

Undoubtedly, Riesling sales will be a regular point of discussion when the Riesling Rendezvous begins Sunday and runs through Tuesday. The event takes place every three years and is being staged by Chateau Ste. Michelle and Dr. Loosen.

Sunday’s grand tasting will occur on the grounds of Chateau Ste. Michelle in Woodinville, and two days of seminars will take place at Bell Harbor Conference Center in Seattle. 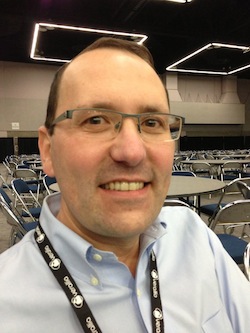 Beginning in 2000 when the first Eroica Riesling was released by Chateau Ste. Michelle, Washington Riesling was on a steep acceleration, with harvested grapes going from 9,800 tons in 1999 to 44,100 tons last fall.

But in the past few years, almost no new Riesling has been planted. In fact, Chateau Ste. Michelle has asked some of its growers to pull some acreage out and replant it with other varieties.

“We’re pulling it out in warmer areas, such as the Wahluke Slope,” Bertheau said. “Maybe we shouldn’t have planted it there in the first place.”

Bertheau noted that the company had quite a bit of Riesling planted six years ago when Riesling still was on a meteoric rise. Those vines now are reaching their full potential and replacing production from Riesling planted in the wrong spots.

At Pacific Rim, Quille also has made adjustments. Like Bertheau, he has used this multi-year lull in Riesling sales to change some of his vineyard sources.

Nearly all of his Riesling now comes from high-elevation vineyards in the Yakima Valley – not far from his production facility behind Red Mountain in West Richland.

“I really love these vineyards between east of Grandview and west of Benton City. It’s a great little bench there, and a lot of the vineyards are getting to be 30 to 35 years old. It’s easy to manage because they also are close to home.” 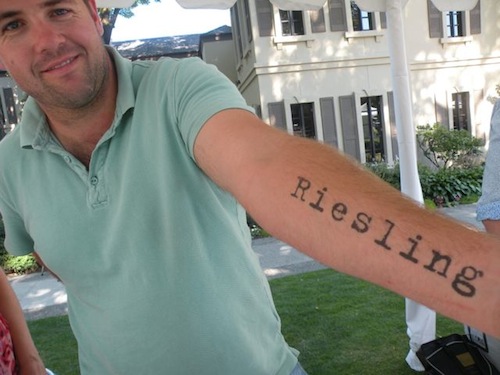 The slowdown in the American Riesling revolution has not deterred these two Riesling winemakers to stop innovating.

Bertheau makes no fewer than seven to nine different bottlings of Riesling each year – depending on whether he makes an ice wine. While his Columbia Valley Riesling is by far the largest production at about 800,000 cases each vintage, the star remains Eroica, the joint project between Bertheau and Ernst Loosen of Germany.

Eroica is a true Washington wine, as Bertheau’s team chooses the final blend each year from upward of 75 different lots.

“One of our huge advantages is we can choose from a lot of sites,” Bertheau said. “Eroica is not from one place. We’re trying to espouse a Washington state style, the right location in the right vintage.”

For the past few years, vintage variation has been a challenge in Washington. After two cold vintages (2010 and 2011) followed by a normal year (2012), the past three vintages (2013-’15) have been historically warm.

But Riesling is a cool-climate German grape. Bertheau said he likes to harvest from his traditional Eroica vineyards around Oct. 20-25, but now it’s a little earlier because of the warmer years.

“That’s a concern,” he said. “Ernie is concerned about hang time. Fortunately, we’re able to reach into warmer areas in cool vintages and cooler areas in warm years. We also have a lot of viticultural techniques (to slow down ripening).”

At Pacific Rim, Quille bottles no fewer than 11 different expressions of Riesling.

“I wish I could make more, but the sales guys told me I couldn’t,” he said with a grin. “We cover the spectrum pretty well.”

The IRF Riesling Taste Profile helps consumers understand how sweet or dry a Riesling is.

One important development in the promotion of Riesling the past decade has been the International Riesling Foundation‘s “Taste Profile.” This is a scale that goes on the back label and shows whether the wine is dry, sweet or somewhere in between.

The scale was developed by wine writer and Riesling enthusiast Dan Berger of Santa Rosa, Calif. Quille, who is vice president of the International Riesling Foundation, was the first to use it when it became available in 2008.

He uses the scale on all but three of his wines, and for Quille, the scale is most useful as a sales tool. When he goes into a market to sell Riesling to a wine retailer, he will use the scale to show how his Rieslings are quite a bit different.

“It helps us segment the market a little bit,” he said. “It helps me sell clients on carrying several types of Riesling.”

That’s important to Quille, whose winery is 80 percent Riesling production.

Chateau Ste. Michelle also puts the scale on most of its Rieslings, and Bertheau is convinced that it is doing the job.

“The Riesling scale is moving the mark,” he said. “I hear about it a lot.”

“After all these years, we still struggle with the perception of Riesling being sweet and simple.”

With some of the world’s best Rieslings coming from Washington, Bertheau and Quille are working hard to change all of that.