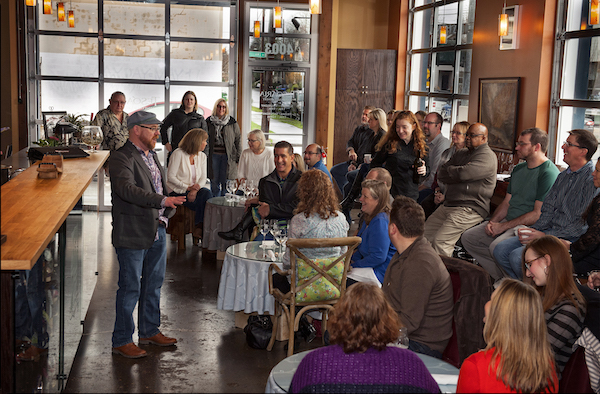 PORTLAND – TeSóAria owner/winemaker John Olson now prefers a vegan lifestyle, and since he owns an Oregon winery with a tasting room in Portland, he’s in a position to put some of his money where his mouth is.

Last month, Olson began offering a tapas-style vegan menu each Thursday night at his tasting room in the Boise neighborhood of northeast Portland. It’s a delicious touch of irony for a winemaker whose best-known wine is called Bull’s Blood.

“This is the way I like to eat now,” Olson said in a news release. “I feel so much better when I’m not eating meat. But even in Portland, there’s nothing out there for vegans who enjoy a fine wine pairing with their meal. It’s time.”

The TeSóAria Vineyard and Winery culinary team of Max Germano and Daniel Escalle take that vegan concept a step further on select Sundays by offering a vegan wine brunch. The next four-course seating will be Sunday, July 24, with a cost of $45. They debuted the concept May 22.

Olson and his wife, Joy, have encouraged the continued expansion of the culinary approach at the tasting room since opening it during the 2013 holidays. Tuesday nights feature free pizza. Wednesdays mean family-style Hangry Hump Day dinners. Friday brings prix-fixe dinners with a “date night” theme.

Each week, TeSóAria announces the new food and wine menus to their 1,500 wine club members through the winery’s website. And later this summer, Olson’s fans can find Germano working as a food vendor at the historic Pendleton Round-Up.

The Olsons created TeSóAria in 2008 after purchasing Palotai Vineyard and Winery in Roseburg, a brand founded in the Umpqua Valley by Gabor Palotai. The Hungarian defector established the winery in 2001 and quickly made a name for himself with his proprietary red blend called Bull’s Blood and his work with Syrah.

Bull’s Blood remains one of Oregon’s most eclectic wines as Olson continues to grow the following for the blend built upon Kadarka, a grape best known in Hungary for producing bold reds but also notorious for downy mildew and bunch rot.

According to legend, as the raiding Ottoman Turks were poised to plunder a Hungarian town, residents decided to ingest some liquid courage by getting drunk on the wines from their cellars. As they entered battle, the Turks soon became intimidated by Hungarians who were soaked with red wine. The invaders believed the Hungarians sacrificed bulls, drank the blood and acquired superhuman powers. As a result, that Hungarian town was spared.

In 1999, Palotai established 4 1/2 acres of Kadarka near the Umpqua River using cuttings he reportedly imported in the shape of a wreath to get them through customs. Three years after purchasing the Roseburg vineyard, Olson planted an additional 1 1/2 acres of Kadarka.

Nearly all of it is sold through the tasting rooms in Portland and Roseburg, a tribute to the work done by Olson, who said Palotai produced  just 500 cases at the time of the winery’s sale in 2008. Olson assumed the role of head winemaker in 2010, with Linda Buckle as the on-premise co-winemaker in Roseburg. 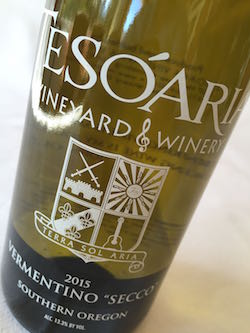 TeSòaria Vineyard & Winery earned a gold medal at the 2016 Cascadia Wine Competition for its 2015 Vermentino Secco, made with an Italian grape grown at the estate Celestina Vineyard in the South Medford foothills. (Photo by Great Northwest Wine)

TeSóAria’s total acreage near the South Umpqua River stands at 30 acres. They created the name for their new brand by combining the words terra (terroir), sol (sun) and aria (music).

There’s also Abouriou, an obscure French red native to Lot-et-Garonne. He brings it in from California to form the base of his Redacted blend, and Olson lists Sonoma winemaker Paul Brasset as a mentor.

The TeSóAria 2015 Sauvignon Blanc won a double gold medal at this year’s San Francisco Chronicle Wine Competition, and the 2013 Zinfandel received a gold medal at the January judging, too.

That Sauvignon Blanc followed up with best of class at the 2016 Cascadia Wine Competition, and TeSóAria merited gold medals for four other wines at the Columbia Gorge judging – the 2015 Vermentino Secco, 2014 Dolcetto and 2014 Redacted.