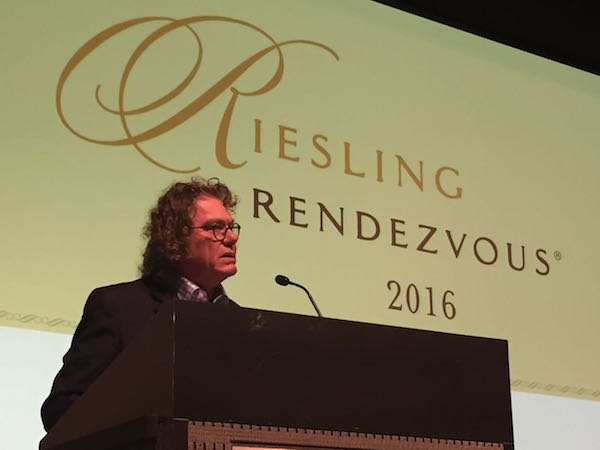 WOODINVILLE, Wash. – Last month at the Riesling Rendezvous, wine experts from around the globe were in the midst of a blind tasting of 20 off-dry Rieslings.

One in particular stood out.

The 300 or so Riesling aficionados were intrigued, many trying to guess where it could be from. One particular expert declared that it must be from Germany’s Mosel. There was no other possibility.

When the wine was revealed, a hush across the room was quickly followed by gasps. The wine was the Eroica 2008 Riesling, a joint project between Chateau Ste. Michelle and Ernst Loosen.

But the 2008? That seemed strange, as the current Eroica in stores across the nation is from the 2014 vintage.

It’s all part of a “new” program from Chateau Ste. Michelle: aged Eroica.

“It all comes from Erni having all those amazing wines,” said Bob Bertheau, head winemaker for Chateau Ste. Michelle and Loosen’s partner in the Eroica label. “When he’s at home in Germany, he doesn’t open a bottle younger than 20 years old for dinner. All of this is founded from that.”

Wait. Aged Rieslings? As it turns out, Riesling is a fantastic wine to drink young or age. Tasting a 40-year-old Mosel Riesling can be a remarkable experience. Some say a Riesling can age as well as just about any red wine.

But that’s not how we think in the New World. As wine lovers, we tend to be in a hurry, and there’s little better than a chilled fresh Riesling on a warm day.

The Eroica program began in 1999 when Loosen approached Chateau Ste. Michelle about doing a joint project using Washington Riesling grapes. When the first wine was released in 2000, it was a hit and is considered largely responsible for the resurgence of Riesling in America.

Even in those early days, Loosen began to lay the groundwork for starting a program of holding back some wines and releasing them after several years.

“Erni would talk about aged Rieslings at all of our tastings,” said Jan Barnes, vice president of marketing for Chateau Ste. Michelle and Eroica. “He always pointed out that fine European Rieslings could age for decades.”

Typically, Loosen travels to Washington twice a year: once in January to go through the blending process for the new Eroica and once before harvest to check on Columbia Valley vineyards.

At least once a year, the Eroica team – which includes the white winemaking staff at Ste. Michelle – tastes a vertical of Eroica. Inevitably, a discussion of aged Riesling comes up.

So in 2012, a plan was formed to begin bringing back an older Riesling. This had to be done carefully because most wine lovers – even those with a lot of tasting experience – might not understand and appreciate why an older Eroica is on a wine list.

“The market for this is small in the United States,” Barnes said. “When we started this, it was a really tough concept for consumers and trade to get. At first, a small amount embraced it. Now it’s starting to gain steam.”

How much Eroica to hold 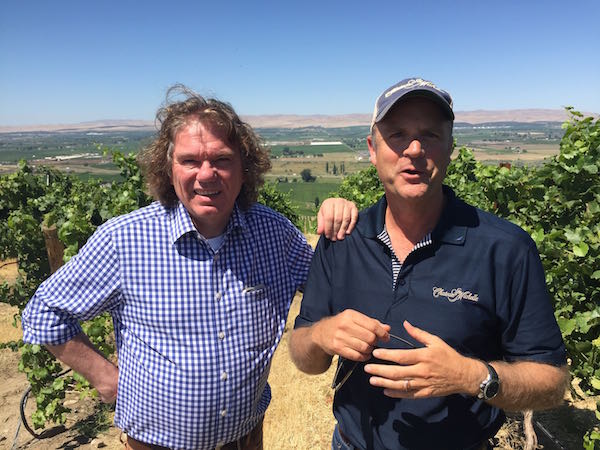 Erni Loosen, left, and Bob Bertheau, stand atop Snipes Mountain in the middle of the Yakima Valley. The pair work together to craft Eroica Riesling each year. (Photo by Andy Perdue/Great Northwest Wine)

Another issue was availability. On average, about 20,000 cases of Eroica have been made each vintage, and it’s a nationally distributed wine.

In the early years, almost none was held back. Wine Spectator magazine ranked the first five vintages – 1999 to 2003 – on its annual top 100 list. That delighted Ste. Michelle’s sales staff because, of course, the whole point of making the wine is to sell it.

“We learned the hard way,” Barnes said. “About 13 years ago, we started locking down a lot more cases.”

Now the protocol is to hold back about 250 cases of Eroica each vintage. It’s all stored at Ste. Michelle under perfect cellar conditions.

The original idea was to hold those cases of Eroica for five years then re-release them to select accounts. But that quickly evolved. Now, the team tastes its annual vertical and decides what is ready for release.

“After years two and three, they go through a funk,” Bertheau said of Eroica Riesling. “Then they come out a more mature person. Five years is a good time.”

Currently, the 2008 Eroica – the one that delighted the experts at Riesling Rendezvous – is the featured aged wine that is going to restaurants in larger markets. The older wines also are available at the Chateau Ste. Michelle tasting room – with the “current” release there being the 2007 vintage. The older wines are not for sale on the Chateau Ste. Michelle website.

When he arrived in Washington from Northern California in 2003, Bertheau had almost no experience making Riesling – it was all about Chardonnay where he worked in Sonoma County. Thanks to Loosen, he quickly became an expert.

And it didn’t take him long to realize how good older Rieslings could be. All it took was a visit to Loosen’s home.

“It was that first trip to the Mosel,” he said. “Erni got out some of his single-vineyard Rieslings from the ’80s. I had no idea that Riesling could be like that. It really opened my eyes. That was in 2004, and that was the beginning of my discovery.”

“Aged Riesling is a serious wine,” he said.

At home, Bertheau will dig out older Chateau Ste. Michelle Rieslings, including the Dry Riesling and the semi-sweet Columbia Valley Riesling.

The aged Eroica program is inspiring Chateau Ste. Michelle to hold back other wines, too.

Its Gold Riesling – a sweeter, juicier wine that was introduced a couple of years ago – is being held back an extra vintage before being released so it can gain a little more character before it reaches the marketplace.

And its Single Berry Select, a trockenbeerenauslese-style dessert wine that sells for about $200 per half-bottle, also is being held back in small amounts.

While it would seem logical to release the 2009 next, Bertheau is torn.