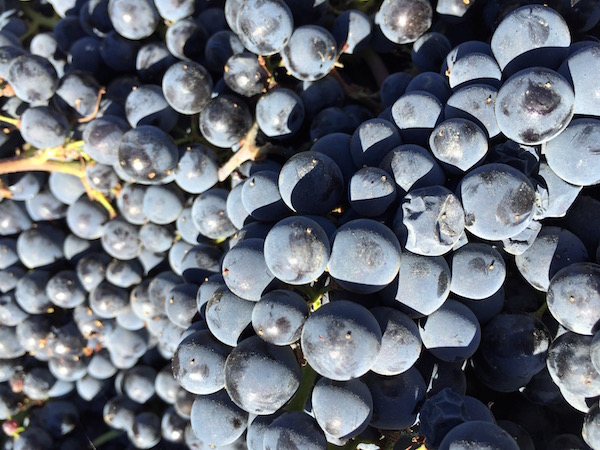 Washington is likely to bring in a record wine grape crop this fall, thanks in large part to tremendous growth in Cabernet Sauvignon. (Photo by Eric Degerman/Great Northwest Wine)

Washington is likely to crush a record amount of wine grapes this fall, perhaps as much as a quarter-million tons.

The Washington Association of Wine Grape Growers (WAWGG) has released its annual crop estimate at 258,570 tons. It is important to note that the crop estimate is not a crush estimate but rather a tool for wine grape growers and winemakers to consider as they enter harvest.

“This year’s crop is making up for two years of less-than-full production,” said Vicky Scharlau, executive director of WAWGG. “Vines are expressing their full potential.”

If Washington happens to bring in more than 250,000 tons this fall, it will have effectively doubled the size of the wine industry in a decade. The state harvested 127,000 tons in 2007.

Washington’s tremendous growth is being fueled by increased sales in red wines, particularly Cabernet Sauvignon. WAWGG estimates acreage in Washington at 56,073 acres of wine grapes, up from 53,353 acres last year. In 2011, Washington had just shy of 44,000 acres. In 2006, it was 31,000 acres.

All of this comes amid a strange 2016 vintage that began warmer than any year to date but began to cool significantly at the end of June. Growing degree days, a measurement of accumulated heat in a given vintage, are below last year’s record warm vintage but still above the long-term average, according to Washington State University. 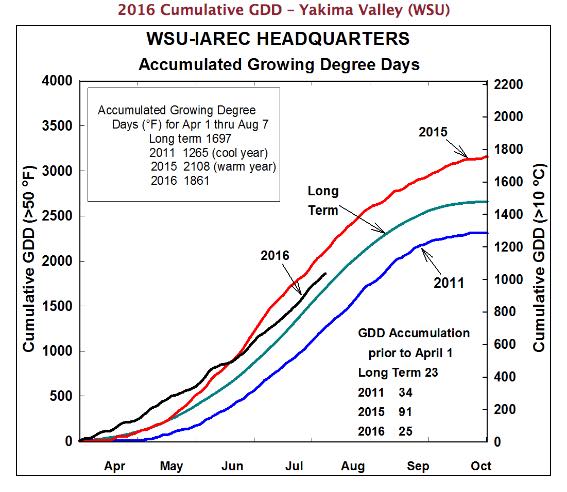 This chart shows growing degree days for 2016 are below last year’s record highs but still above the long-term averages. (Image courtesy of Washington State University)

Kevin Corliss, vice president of vineyards for Ste. Michelle Wine Estates, said he is in the process of thinning the crop where it needs to be done.

At this time of year as wine grapes change colors, wine grape growers will reduce the crop load by removing clusters of grapes. This helps growers ensure that the remaining grapes reach optimal ripeness.

“We have a pretty good crop hanging out there,” Corliss told Great Northwest Wine. “We’re going to see full crops on most varieties. Merlot in particular looks big.”

Ste. Michelle Wine Estates uses about two out of every three grapes grown in Washington, so the company’s growth propels the entire industry. Ste. Michelle is contracting with growers to increase acreage of red wine grapes in the Horse Heaven Hills and Wahluke Slope.

“Our greatest area of growth has been in the Horse Heaven Hills,” he said. “It has more capacity for growth.”

“We have lots of acres of Cabernet,” Corliss said. “We’re seeing significant crops off second- and third-year vines.”

At the same time it is boosting Cabernet production, Ste. Michelle also is reducing the amount of Riesling it has contracted. In many cases, it is asking growers to replant or regraft Riesling in less-suitable regions to red grapes.

“We are gaining more in Cabernet than we’re losing in Riesling,” Corliss said. 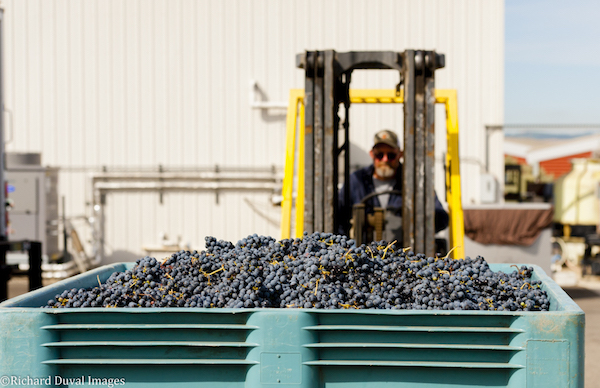 By this time last year, Washington grape growers already were harvesting their grapes, with Sauvignon Blanc picked at Artz Vineyard on Red Mountain and Marquette picked at Red Willow Vineyard in the western Yakima Valley on Aug. 6.

So far, Great Northwest Wine has received no reports of harvest activity. Corliss said Ste. Michelle might bring in a little Chardonnay next week from warmer areas and Sauvignon Blanc in the next two weeks.

Todd Newhouse, who manages Upland Vineyard on Snipes Mountain in the Yakima Valley, believes he will begin harvesting Sauvignon Blanc perhaps as soon as next week.

“The crop is looking good,” he said. “We’re dialing it in for harvest.”

He said the size of the crop is normal this year, compared with last year when it was smaller than usual. Newhouse attributes that to the scorching weather the Columbia Valley received in June and July 2015.

“It’s a nice-looking crop. I think this will be a good vintage if weather cooperates through harvest.”

Dave Minick, director of vineyard operations for Seattle-based Precept Wine, is planning on a bigger harvest this year, primarily because he has new acreage coming into production.

“I have 140 acres that produced almost nothing last year and will produce a big crop this year,” he said. “We’re on target for where we want to be.”