NEWBERG, Ore. – When David Adelsheim moved to what would become Oregon wine country, he landed here in the Chehalem Mountains in the northern Willamette Valley.

At the time, he didn’t necessarily have a sense for what the potential was for Pinot Noir in this location. And ultimately, he began bringing in grapes from many areas of the valley.

It’s been nearly 45 years since he began planting Pinot Noir here, and when most people might opt to slow down and enjoy the success they’ve had, that’s simply not in Adelsheim’s DNA.

Instead, he is on a quest to bring greater clarity to Pinot Noir from the Chehalem Mountains. He is refocusing Adelsheim Vineyard‘s efforts and eventually will likely use only grapes from the largest of the six new American Viticultural Areas in the northern Willamette Valley.

“We got to witness the beginning of the wine industry,” he told Great Northwest Wine. “We’re selling wines around the world, and people are starting to recognize that Oregon and the Willamette Valley – and hopefully some day the Chehalem Mountains – are known for these great Pinot Noirs and Chardonnays.”

We recently traveled to Adelsheim’s original vineyard plantings in the Chehalem Mountains to talk about his history in the Oregon wine industry and the new direction he is taking. 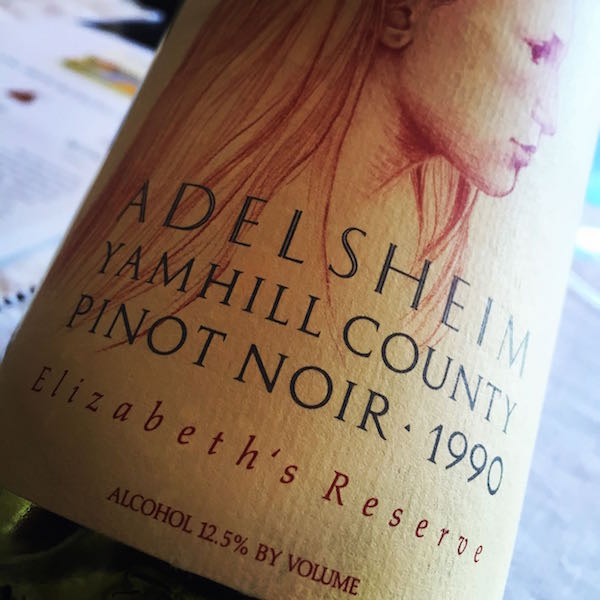 An Adelsheim Vineyard 1990 Pinot Noir used grapes from across the northern Willamette Valley. Today, Adelsheim is refocusing its efforts on wines from the Chehalem Mountains. (Photo by Andy Perdue/Great Northwest Wine)

By 1971, a handful of intrepid visionaries began planting wine grapes in Oregon, starting with Richard Sommer, David Lett, Dick and Nancy Ponzi, Charles Coury, Dick Erath and Jim Maresh. At the time, David and Ginny Adelsheim were living in Portland and wanted out.

“We’d never lived outside of a city, so we didn’t want to be too far away,” he said. “But when we came in this direction – southwest of Portland – we just felt there was something. We’d heard somebody had planted wine grapes.”

Well, that was intriguing. On a fateful day, they happened upon Erath, a gentle giant of a man, and stopped him on the side of the road and asked where one might consider planting a vineyard.

Eventually, the Adelsheims came across a piece of property in the hills above Newberg and bought 19 acres for $24,000.

“It was ridiculously expensive by our standards,” he said.

A year later, they began planting grapes. And in 1978, they launched their winery, Adelsheim Vineyard.

Grapes were scarce back then, so as the Willamette Valley began to develop vineyards, Adelsheim Vineyard temporarily turned toward Washington for fruit, buying grapes from Sagemoor Vineyards.

Adelsheim Vineyard was one of the first 10 wineries in the modern Oregon wine industry, truly a pioneer. Today, there are more than 600 wineries, with the vast majority in the Willamette Valley.

“It keeps getting exciting,” he said. “There’s new stuff to do. It’s not that we’re doing the same thing over and over and there’s a recipe that works.”

If it works in Burgundy 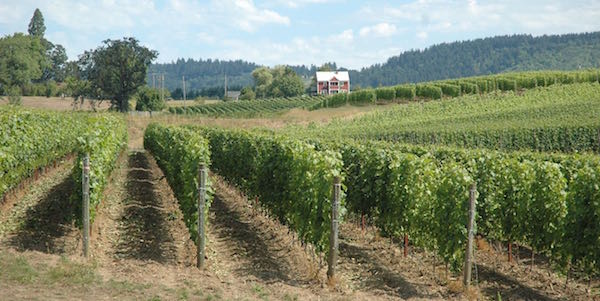 This vineyard is at Adelsheim Vineyard’s winery in the Chehalem Mountains. (Photo by Andy Perdue/Great Northwest Wine)

As much as any red wine, Pinot Noir is a transparent variety that reveals its sense of place. Just as Pinot Noir from Volnay is different than Pinot Noir from Beaune, so too are the distinctive qualities from one hillside to another in the northern Willamette Valley.

“I think that we grew organically, if you will,” Adelsheim said. “We would buy grapes from friends. Slowly, we bought grapes from the Willamette Valley as there were grapes to purchase.”

But being known for blending grapes from a broad area isn’t consistent with the vision of making the best possible wine, Adelsheim and others came to realize.

“Burgundy is not about blending grapes from all over Burgundy. It’s about that amazing site that your family happened to have purchased 800 years ago, then making wine from that site and keeping it separate and doing it year after year.”

Adelsheim came to understand the Burgundians were right – and that he had a lot of history in the Chehalem Mountains.

About a decade ago, the federal government approved six new AVAs in the northern Willamette Valley. They included the Dundee Hills, Eola-Amity Hills, McMinnville, Yamhill-Carlton, Ribbon Ridge and Chehalem Mountains. In essence, the heart of the Oregon wine industry was redefining itself, exploring and recognizing the nuances of Oregon Pinot Noir.

The stars quickly became the Dundee Hills because of the early pioneers (Eyrie and Erath) and Yamhill-Carlton because acclaimed winemaker Ken Wright made it his home. The other four were less understood, particularly the Chehalem Mountains. 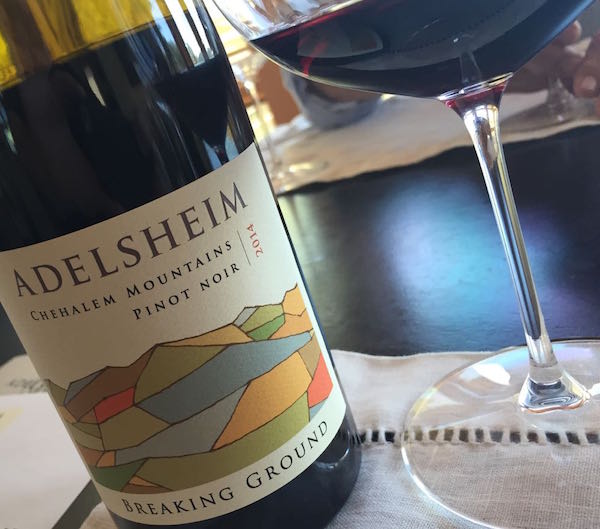 In the northern Willamette Valley, no AVA has more wineries than the Chehalem Mountains. Most are small producers with little wine in distribution. As such, the area hasn’t necessarily received the recognition that its neighbors have.

“We felt we need to help reverse that, partly because we’re one of the founding wineries,” Adelsheim said. “We have a voice that people perhaps pay attention to from time to time. By redefining ourselves in the Chehalem Mountains with Chardonnay and Pinot and eventually just from our own estate, it makes a concise elevator speech when somebody asks what we do.”

The Chehalem Mountains is the largest of the six AVAs, and it has three distinct soil types. These factors make it more difficult to define, and that is Adelsheim’s new quest. He’s starting with a new wine, which he calls Breaking Ground.

“It’s really the first new wine that our winery has come up with since 2005 – a new concept from scratch.”

The first release, from 2014, is 1,700 cases, and it is a blend of Adelsheim’s longtime vineyards in the Chehalem Mountains.

“The challenge is that if you’re dealing with three different soil types and elevations all over the board, what is it that you’re trying to capture?” he said. “And because that had never been defined before, we in essence are defining what the Chehalem Mountains taste like. Not one soil type, one vineyard, one place, but Chehalem Mountains as a whole. It’s quite an interesting project to take on this rather monumental task, and yet it’s been very rewarding because there is a purity to the fruit in this wine that is just amazingly seductive.”

The name Breaking Ground pays tribute to Adelsheim Vineyard’s history here in the Chehalem Mountains going back to 1972. But it also refers to the refocusing on a new wine and the quest to define the region.

“We aren’t relying on our past to go into the future,” he said. “We’re breaking ground on new concepts.”