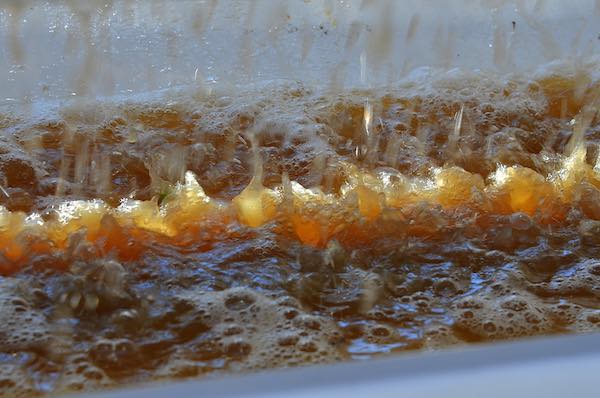 WALLA WALLA, Wash. – Sour grapes used to be a thing, back in the day.

The ancient Romans, renowned for their cultivation of grapes and making of wine, are known to have appreciated tart flavors – and specifically the flavor of the juice of unripe grapes. Far from having today’s connotation of bitter disappointment, in the past sour grapes were considered to be a source of health, good digestion and freedom from heartburn.

From the French words vert jus, or green juice, verjus is the pressed juice of unripened grapes. Don’t pronounce the “s” at the end of the word and you’ll be saying it just right.

It’s not fermented, it’s not alcoholic, and it’s not drinkable. You are not going to sit down with a nice refreshing glass of verjus because that would be akin to drinking a glass of mild vinegar, straight up. Instead, it’s for cooking, for those times when you want to add a special kind of sourness to a dish, a tartness that also carries subtle hints of floral sweetness, an acidic note that reminds you of the ripe fruit the grapes could have become.

Centuries after the Romans first pressed green grapes, verjus remained popular in the Middle Ages and appears as an ingredient in a number of medieval cookbooks. While today you’ll find it pasteurized and bottled, back then it was salted to preserve it from fermentation and spoilage, according to L’Agriculture et Maison Rustique, a book of household wisdom dated 1572. Salty and sour at the same time is a flavor profile that we seldom encounter today, perhaps akin to a Japanese umeboshi dried plum.

But food trends have been coming and going since antiquity, and the once-popular verjus gradually fell out of favor with the advent of the cultivation of lemons, which were brought back to Europe during the Crusades and provided a colorful and neatly packaged form of sourness that required little effort to extract.

Then sugar became ubiquitous, and our palates changed as a result of having sweeteners added to almost everything we eat.

Although extreme tartness was once considered to be an exciting flavor, in modern times the tide has turned toward sweetness. Sour beer may be temporarily trending, but sour wine definitely isn’t. Pisco sour? Yes. Mouth-puckering, tongue-tingling, saliva-inducing fruit? Not usually. Verjus, however, is enjoying a renaissance, thanks to grape growers seeking a novelty product that makes use of fruit that might otherwise go to waste.

At this time of year, just before harvest, grape growers are watching closely as their fruit begins to ripen. Often they make the choice to remove some of the grape clusters just before veraison, when the grapes are beginning to develop color. Dropping some of the green fruit allows the vine to pour all of its energy and a lot of stored sugars into the remaining clusters, and concentrates the fruit’s flavors. This can be a painful process for the grower, dropping the tight green clusters to the ground, deciding to abandon their winemaking potential. Remember that grape growers get paid for their fruit by the ton.

In the Pacific Northwest, every ton of fruit dropped to the ground represents a loss to the grower of $1,500-$3,500, depending on the variety. In a business with low profit margins, those losses add up fast.

But making and selling something delicious out of those green clusters eases the pain. It’s good for the grower’s bottom line, and it’s good for cooks who love to try new flavors and ingredients. Remember that maxim that it’s hard to pair wine with salad because it will clash with the vinegar in the dressing? That disappears when you make your dressing with verjus, which blends in naturally with any wine.

Verjus is right at home anywhere that you’d use vinegar or lemon juice, and it is especially nice with foods rich in fat, such as foie gras and duck breast, or anywhere that you’d like to add a delicate, bright note to your dish. You can use it as a replacement for citrus juice in cocktails, add a spoonful to a summer fruit salad, or drizzle it on fish fresh off the grill.

Think of it as one of the most versatile condiments in your kitchen – and as a delicious form of recycling. Grapes that would have become lowly compost have now become your link with the foods of ancient times and a sweet addition to your arsenal of tart flavors. 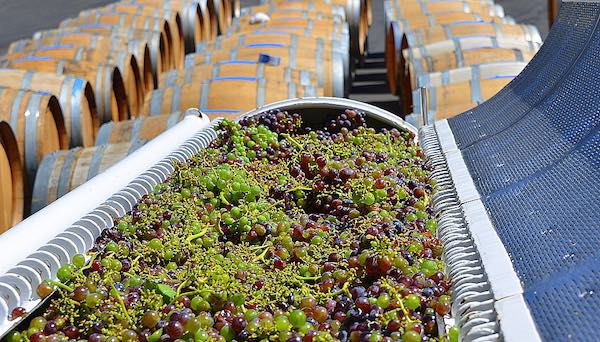 Unripe wine grapes are put into a press at Walla Walla Community College. The juice is squeezed to make verjus, a tart juice used for cooking. (Photo by Abra Bennett/Great Northwest Wine)

This is a classic French farmhouse chicken dish that’s easy to make and nice enough to serve to guests. In France, you’d probably drink a fresh red Bordeaux with this, maybe a Pécharmant, but it would also be delicious with a dry Riesling or another unoaked white wine.

In a large, heavy skillet melt the butter into the olive oil. Salt the chicken and brown it in the oil and butter mixture, working in batches if necessary, until the chicken is golden all over. Remove the chicken to a plate and set aside.

Add the shallots and carrots to the skillet and stir them until the shallots are translucent. Add the verjus and bring to a boil, then add the wine and bring it back to a boil. Return the chicken to the pan, skin side up, as well as the juices that have accumulated on the plate. Add the bay leaf, thyme, parsley, and a good grind of black pepper. Cover the pan and simmer gently for 20 minutes.

Add the mushrooms and stir to coat then with the juices. Cover the pan and simmer for another 15-20 minutes, until the chicken and mushrooms are tender. Remove chicken and vegetables from the pan with a slotted spoon and heap on a serving platter. Keep warm.

Deglaze the juices in the skillet with the chicken broth and boil quickly until syrupy. Turn off the heat and swirl in the butter quickly. Taste the sauce and adjust the salt and pepper as needed, drizzle the sauce over the chicken, and serve.