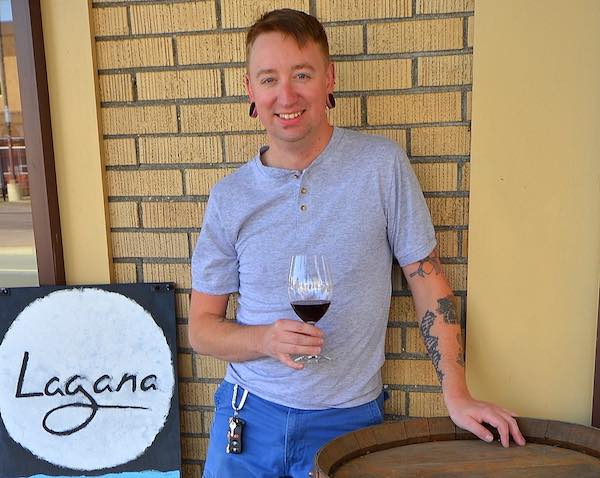 WALLA WALLA, Wash. – Jason Fox is a trend-bucker at heart, and it’s not just his tats, piercings and hip ear jewelry.

How many people do you know who started out studying astrophysics, got a degree in anthropology, and were winemakers for two wineries simultaneously by the age of 31?

In 2011 with a strong background in science from Indiana University, Fox left a stressful sous chef position in the Hoosier State bound for Walla Walla Community College’s enology and viticulture program.

“I knew there was going to be quite a bit of science,” he said. “I didn’t come here with the idea that I’m going to move out West and start a winery, and it’s all going to be great and glorious, that I was never going to be wet, dirty, sticky, and have lees-stained clothes. Because that’s what it is. That’s winemaking.”

After graduating from Walla Walla Community College in 2013, he founded Lagana Cellars, at the same time making wines for Locati Cellars. He continues to juggle both jobs today.

Locati is in Oregon, so during the season he spends a lot of time crossing the state line, keeping on top of the two operations.

“In the morning I’ll get up, go out to the airport (where his Lagana wines are made), turn on the chiller, go to Locati and work on the reds,” he said. “It’s just back and forth all the time, putting a lot of miles on the car.”

Lagana is a one-man operation. When he’s not on the road, Fox is harvesting, crushing, bottling or working in the downtown tasting room on Rose, across the street from the Marcus Whitman Hotel. Processing about 20 tons of fruit per year for Lagana alone, he’s a model of fully committed over-employment. 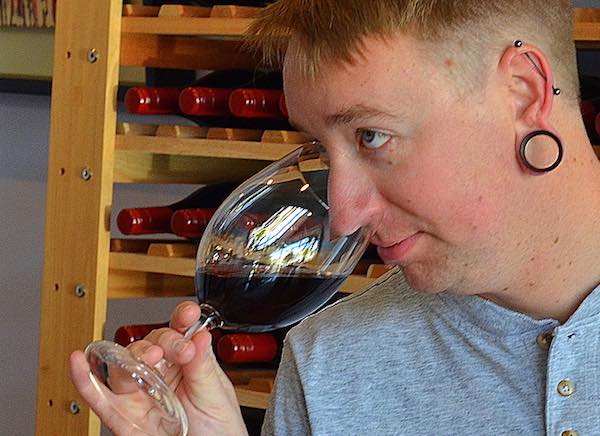 Jason Fox brought a science background when he decided to pursue a winemaking career in the Walla Walla Valley. He now owns Lagana Cellars. (Photo by Abra Bennett/Great Northwest Wine)

In addition to making wines in two states, Fox also bucks the trend by specializing in making white wines in Walla Walla – an area where 95 percent of the grapes grown are red. For that reason, he sources his white grapes from the broad Columbia Valley, where he believes that the white varietals grow better.

He prefers to make white wines because “they are harder to make, there’s more science involved. Pretty much anyone can make reds, get the grapes, crush them, throw them in the fermenter. They basically handle themselves. With whites, there’s a high risk of oxidation to the juice, so you really want to get on top of that. Ninety percent of a white wine is made at the press.”

“People come into the tasting room and say they don’t drink whites, and I tell them that’s racist,” he said with a laugh. “They think that whites are going to be cloyingly sweet, and yeah, that’s the mass market. There are a lot of cheap whites out there that are sweet.”

His favorite white is Roussanne, a grape that’s native to France’s Rhône Valley and unfamiliar to many of his customers.

“It’s perfectly balanced,” he said. “It has good acidity to it, the alcohol’s not too high, and I just like the way it tastes. It takes to oak well.

“When I first opened Lagana, I didn’t have any awards yet, so people weren’t sure about it,” Fox continued. “And I’d tell them that Roussanne is kind of like Chardonnay in flavor, it still has that pear-apple backbone to it, but at first everyone was going for the Sauvignon Blanc. Then they switched over to Riesling when they learned that dry Riesling exists. But now it’s the Roussanne that’s selling the best.”

Also, he adds, “I pick my grapes a little earlier. I don’t want them to be too ripe. I want my wines to be more austere, more in the Old World style.” 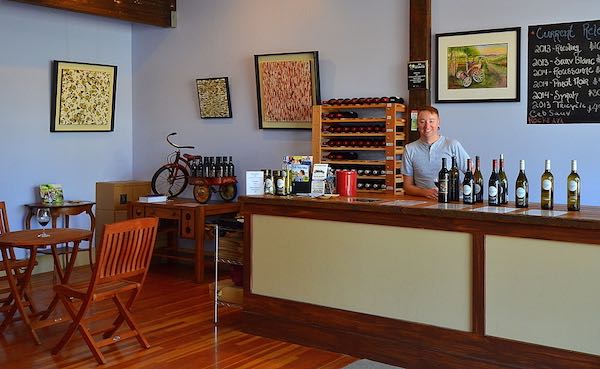 Jason Fox is a one-man operation. When he isn’t making wine for Locati Cellars or his own Lagana Cellars, he’s working his tasting room in downtown Walla Walla. (Photo by Abra Bennett/Great Northwest Wine)

Fox also has also made it his mission to educate the wine-drinking public about screwcaps.

“I use 100 percent screwcaps, so we’re bucking the trend there, too.”

Screwcaps also are less expensive, he said, which helps him keep the cost of his wines down while also eliminating the possibility of cork taint and thus ensuring consistency of his product.

Another cost-cutting measure that’s integral to Fox’s winemaking style is the use of “oak alternatives,” which he uses instead of new barrels. He uses oak staves and oak chains, as well as powdered tannins made from chestnut, which he adds even to white wines.

And he credits the education, winemaking skill and viticulture knowledge he received at Walla Walla Community College for much of his success.

“The hands-on, that’s what makes the program so awesome and so good for the students and for the industry here,” Fox said. “From practically day one, we’re working with all the equipment, all the processes, pruning the vineyard. We learn to do pretty much everything, and the industry loves that.”