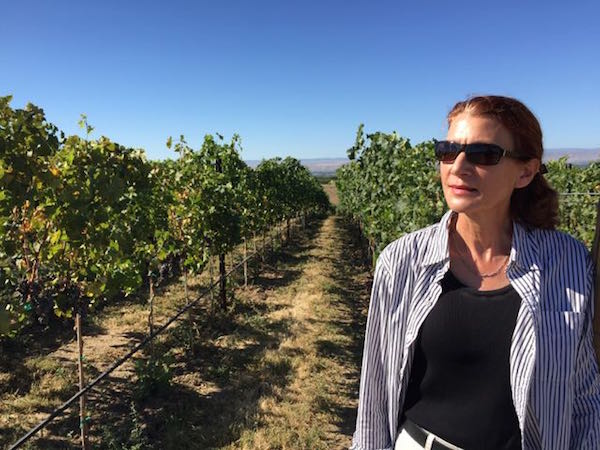 Robin Pollard ran Washington’s travel and wine industries for several years. Today, she owns Pollard Vineyard in the Rattlesnake Hills and plans to launch a winery next. (Photo by Andy Perdue/Great Northwest Wine)

ZILLAH, Wash. – She spent more than 15 years promoting Washington tourism and wine. Now, Robin Pollard has gone back to her farming roots by planting a vineyard in the Rattlesnake Hills and starting a winery.

“It’s pretty cool to be able to walk the talk,” she told Great Northwest Wine.

Pollard spent six years running Washington’s wine industry as executive director of the Washington State Wine Commission. That came on the heels of being the Washington tourism director.

During her tenure, Washington’s wine industry saw tremendous growth, building from about 300 wineries to almost 800 and nearly doubling the number of acres of wine grapes planted in the state.

Today, Pollard lives on Vashon Island – just a short ferry ride from Seattle – and has planted Pollard Vineyard not far from the Yakima Valley town of Zillah. She also is a professional coffee roaster and is starting her own small winery.

“It’s been a circuitous path, one that I would never have predicted but one that I’m thrilled to be on in this point of my life,” she said.

We recently caught up with Pollard at her vineyard, a 10-acre parcel that is high above the valley floor and offers stunning views of Mount Adams and Mount Rainier. 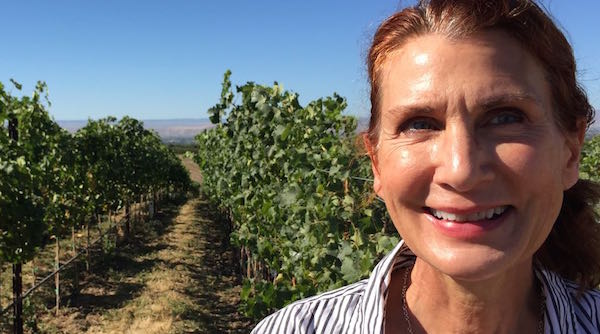 Robin Pollard grew up on a farm in Iowa. After a career in government service, she’s back working in the soil, this time as owner of Pollard Vineyard in Washington’s Rattlesnake Hills. (Photo by Andy Perdue/Great Northwest Wine)

Pollard grew up on the family farm in Iowa and earned a master’s degree in agriculture from Northwest Missouri State University. In 1994, she came west to take over the state travel bureau – a post she held for six years, after which she was appointed assistant director of economic development by then-Gov. Gary Locke.

Her time running Washington’s tourism efforts introduced her to the wine industry.

“I was the state travel director in the mid-’90s, and having an agricultural background myself, I was really enthused about the burgeoning Washington wine industry,” she said. “I saw great potential in bringing visitors to this part of the state. So I teamed up with (then-Executive Director) Steve Burns at the Washington Wine Commission and we formed a group to study how we could develop wine tourism.”

Through those years, Pollard saw the state wine industry grow from fewer than 100 wineries to triple that. Burns left in 2004 to return to his native California and focus on O’Donnell Lane, his marketing and public relations company. The wine commission hired a new executive director, who flamed out after a few months.

That left an opening for Pollard.

“Over the years, I saw (the Washington wine industry) grow and establish its stature in the world of wine,” Pollard said. “When the position of executive director of the wine commission came open, I knew that was my job, so I went for it.”

After six rewarding years, it was time for Pollard to step away. But the experience left her with ideas of what to do next. 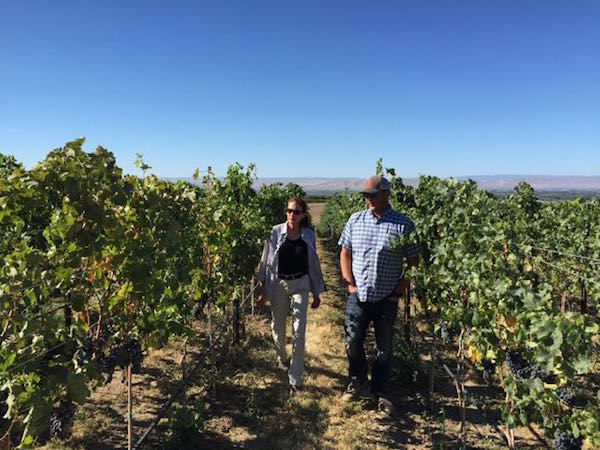 It is not necessarily a natural path to go from running the wine industry to joining it, but that’s exactly what Pollard decided to do.

“Toward the end of my tenure (at the wine commission), I was thinking, ‘Well, what’s next for my life and my career?'” she said. “Having grown up on a farm, I knew I wanted to be a grower, so I started looking for sites around the state and really zeroed in on this region.”

The Yakima Valley is the cradle of the Washington wine industry, and the Rattlesnake Hills is home to several top vineyards, including DuBrul and Elephant Mountain.

“I love the quality of the fruit that comes out of this area,” she said. “I knew this was a stellar grape-growing region, and I also liked the wines that were getting produced.”

When a 10-acre alfalfa field came up for sale about 20 minutes from downtown Yakima, Pollard knew she had found her opportunity. So she bought the land and in 2014 planted it to Cabernet Franc, Merlot and Cabernet Sauvignon.

Her first important move was to team up with Patrick Rawn of Two Mountain Winery. He is one of the most respected grape growers in the Rattlesnake Hills, farming more than 100 acres of vines in the region. He agreed to be Pollard’s vineyard manager.

“I felt very fortunate when he said yes,” she said.

Last year, a modest crop came off Pollard Vineyard, and she is looking forward to more this fall.

“Our focus is on putting the energy back into the health of the vines, but we will get a pretty substantial crop this year,” Pollard said. “The vines have thrived over the last two years.”

Part of that is location, part of it is two warm vintages, and a lot of it rests on Rawn’s talents.

Up next: a winery 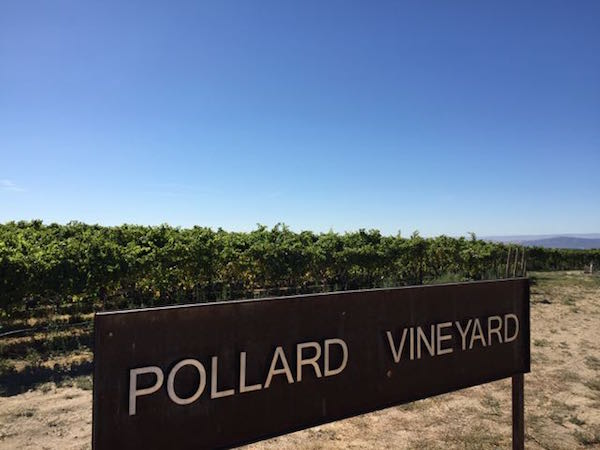 Pollard’s primary focus is on growing grapes. She likes being a member of the Washington Association of Wine Grape Growers. But she also has that entrepreneurial itch, a remnant of her childhood and the Midwest work ethic instilled in her by her farming parents.

A logical next step is starting her own label, something she’s already working on.

“My plans are to be able to produce enough wine to show what this vineyard’s potential has, as well as the fun of being able to have my own label,” Pollard said. “I’m fortunate in having one of the best winemakers at my disposal.”

That would be her partner, Chris Camarda, owner of Andrew Will Winery on Vashon Island and long considered one of Washington’s most talented winemakers.

“He’s been invaluable in offering guidance both in the vineyard as well as in the cellar,” she said. “I plan to keep the quantity fairly limited. My focus is on growing grapes and selling the grapes.”

Pollard’s plan is to keep about 6 tons of fruit for herself – enough to make just shy of 600 cases for her yet-to-be-named winery.

Camarda already is familiar with the region, as his estate Two Blondes Vineyard – a 30-acre parcel planted in 2000 – is about two miles away.

Pollard also is involved in Andrew Will, helping with marketing and public relations, as well as events at the Vashon Island winery.

Pollard Coffee: a passion for roasting 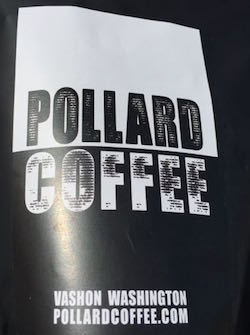 Wine is not Pollard’s only beverage of choice.

“I love coffee as much as I love wine, and when I was contemplating my future, I started playing around with roasting,” she said. “I bought green coffee beans from all over the world to really understand the varietal differences and the regional differences.”

She and Camarda burned through two home roasters, but the results were good enough for Pollard to make it a commercial venture.

“Our friends and family who were subjected to tasting this said, ‘This is pretty good.’ So I bought a commercial roaster in 2012, and I’ve really focused on honing my skills.”

That’s how Pollard Coffee was born. As a coffee roaster, she is self-taught, learning along the way through some classes with the Specialty Coffee Association of America.

“I’ve had the good fortune of having some really great mentors,” she said. “That led me to start roasting commercially, and I now have customers all over the country.”

Pollard crafts eight blends of coffee, which she sells directly through her website and a few retail outlets.

Now that she has two of Washington’s favorite beverages covered, what’s next for Pollard? Microbrews? Craft spirits? Bottled glacier water? Nah, she’ll leave those for someone else.

Instead, Pollard is quite pleased with the rural lifestyle afforded her by living on Vashon Island, where she raises chickens and pigs and manages a big garden.

“There’s something about it,” she said. “Once you get the on the ferry and push away from the dock, you do have a sense of calm and peacefulness. Vashon is still very much a rural community. It’s very collegial, and yet you can maintain your privacy.”