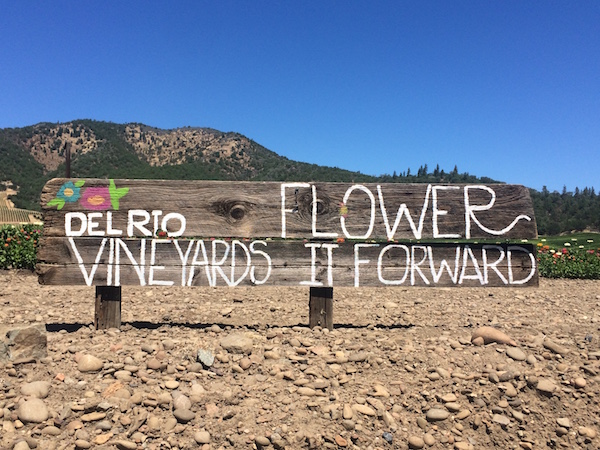 Del Rio Vineyards is one of Oregon’s largest vineyards at 305 acres, and it recently planted long rows of zinnias for guests to pick for free and share with friends or those in need of a pick-me-up. (Photo courtesy of Del Rio Vineyards)

GOLD HILL, Ore. – Del Rio Vineyards grows its award-winning grapes for its own winery and sells to many, but the Wallace family recently started raising flowers that it is giving away.

The Southern Oregon estate winery launched a project it has coined as “Flower It Forward,” and the family hopes its concept of gifting rows of U-pick zinnias will spread beyond the Rogue Valley and throughout the Pacific Northwest.

“I was inspired last year when I saw a farmer in Yolo, Calif., named Mark Mezger, who had planted various zinnia flowers in one of his fields for people to give to others,” co-owner Jolee Wallace said in a news release. “I got so excited when I saw his flower field that I wanted to do this here in Oregon.”

Del Rio Vineyards, about 15 miles north of Medford, has dedicated several rows of its estate for visitors, hoping they will follow one rule: For every bouquet a visitor picks, pick another bouquet for someone in a care facility or a friend in need.

“The idea behind this flower farm is to spread joy and kindness throughout the Rogue Valley,” said Mary Beth Leavens, brand manager for Del Rio Vineyards. “We encourage people to bring their own vases, clippers and buckets.

“Water and vases are available for those who don’t bring their own, and vase donations are happily accepted,” she added. “These flowers are not for resale.”

The team at Del Rio makes one more request. 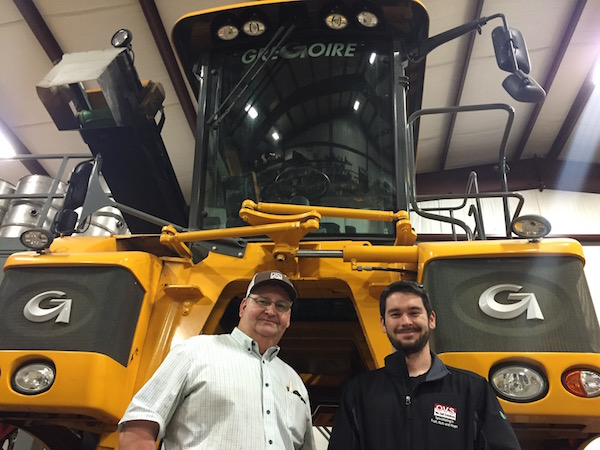 Rob Wallace, left, and his son, Clayton, make Del Rio Vineyards a property managed by a family with five generations of farming in its background. (Photo by Eric Degerman/Great Northwest Wine)

California farmer Lee Traynham brought on his friends Rob and Jolee Wallace in 2000 to help transform a 90-year-old pear orchard into an award-winning vineyard. Wine grapes are a much different row crop than Rob, a fourth-generation farmer from Arbuckle, Calif., had been accustomed to working with in his native Sacramento Valley, but his expertise turned Del Rio into the largest vineyard in Southern Oregon at the time, spanning 185 acres.

Perhaps the biggest star among its 15 varieties is Syrah, and one of Del Rio’s first customers was acclaimed Ken Wright, who made it a natural fit for his young Tyrus Evan program based on Rhône varieties grown beyond the Willamette Valley.

And while it still sells fruit, the scope of Del Rio changed in 2004 when it began making and bottling wine under their own brand. It worked with decorated producers such as Wright and Bryan Wilson prior to hiring Jean-Michel Jussiaume. The Loire Valley native came to Del Rio in 2008 from New York’s exciting Finger Lakes region, where he worked for one of the country’s premier Riesling producers – Dr. Konstantin Frank. Ironically, while Del Rio has nearly 5 acres of Riesling, it’s all blended with Early Muscat.

“I love Riesling, but we don’t have a program for it,” Jussiaume said with a smile. “We already have a lot of different wines.”

The Frenchman continues to excel in the Rogue Valley. This year at the nation’s largest judging, the San Francisco Chronicle Wine Competition, Del Rio Vineyards won gold medals for its 2012 Claret and 2014 Chardonnay with silvers coming from its 2014 Viognier, 2014 Pinot Gris and 2013 Pinot Noir. Jussiaume and his winemaking team stays busy with some custom-crush work for a few wineries.

Recently, they launched a second label called Rock Point, named for the Rogue River community created prior to the Civil War. A hotel/stagecoach stop opened at Rock Point in 1865. One of the first moves the Traynhams made after purchasing the 1,000 estate from the Duel family in 1997 was to restore the Rock Point Hotel. That piece of Southern Oregon history now serves as Del Rio’s inviting tasting room. 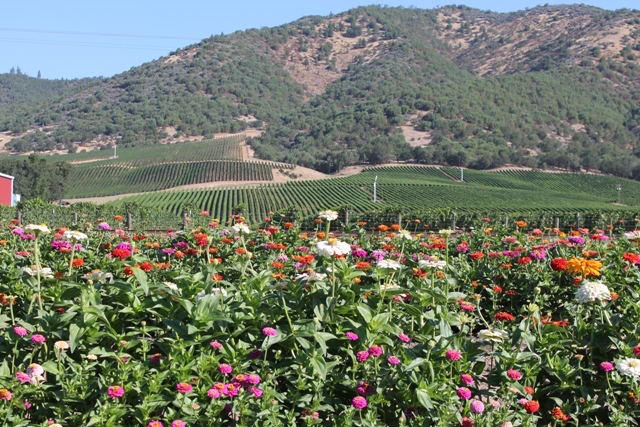 Del Rio Vineyards is one of Oregon’s largest vineyards at 305 acres, and it recently planted long rows of zinnias for guests to pick for free and share with friends or those in need of a pick-me-up. (Photo courtesy of Del Rio Vineyards)

The Flower It Forward program is one way the Wallace family wants to give back to the community that has helped it expand its footprint in the Northwest wine industry with a production of 30,000 cases and a team of 60 employees. It’s a remarkable second career for Rob Wallace, who grew up about 30 minutes north of Mezger’s farm and a hour from Sacramento.

Soon after the 2015 harvest, the Wallace family – their son, Clayton, is actively involved in the vineyard operations – began to move ahead with planting an additional 120 acres.

“The base of the vineyard is about 1,000 feet, and the new vineyard goes up to 1,600, so there’s going to be a lot of diversity,” Rob said. “And the soils here are very light volcanic soils, compared with some of the other soils in the area that have some clay to them.”

“There’s a half dozen different clones of Pinot Noir,” Wallace said. “It’s going to be fun, and it’s going to be interesting to see. Jean-Michel is pretty excited about it.”

This past spring, the Del Rio team also paid $2 million for two additional parcels totaling 215 acres. There’s some history to the property, a cattle ranch that had been in the Birdseye family for six generations, stretching back to the 1850s. Tranyham purchased Del Rio from a family that had owned the old stage hotel for four generations.

The Wallace family plans to begin planting 175 acres of vines near Valley of the Rogue State Park, about five miles downstream from Del Rio, in 2017. 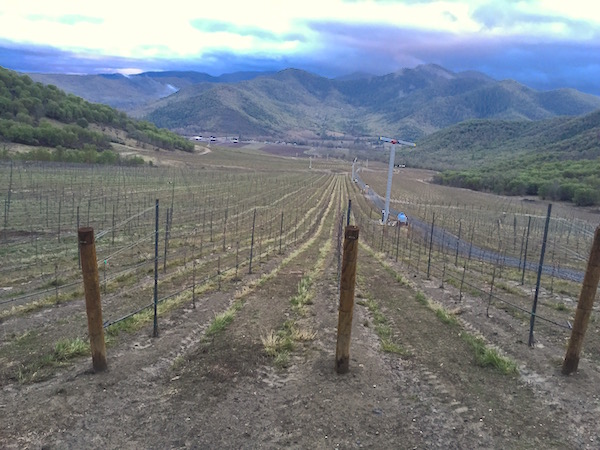 Del Rio Vineyards in Gold Hill, Ore., expanded its plantings to 305 acres this past winter, stretching to 1,600 feel in elevation. The new vines will give winemaker Jean-Michel Jussiaume six clones of Pinot Noir to work with. (Photo by Eric Degerman/Great Northwest Wine)

In retrospect, the 2015 harvest may well go down as the least complicated in the history of Del Rio. This fall, on top of crush, it will have the new plantings to monitor and the Birdseye ranch to prepare for.

“It was probably the nicest season I’ve seen in the 15 years I’ve been here,” Rob said. “It was awesome clear to the finish line. It was a couple of weeks early, and it was the easiest harvest we’ve ever had. We had no weather conditions. No ripening problems.

“In 2011, it was the opposite. We were picking in 27 degrees in November to get that crop off,” he added. “Last year, we were done in the middle of October.”

At its size, the Del Rio team must rely on mechanical harvesting, and it favors picking at night for a variety of reasons.

“So let’s say Jean-Michel comes in and says he wants to pick a particular block of Pinot Gris. Within 15 minutes coming off the harvester, it’s going straight into the press,” Wallace said.

“We’ll start harvesting around midnight, and he’ll come in around 4 sometimes,” he added. “You can see better at night because there’s not the glare, and the machines work better because it’s not 100 degrees out.”

Distractions and hazards are diminished, too, they said. Tourists don’t show up until 11 a.m., and yellow jackets aren’t an issue, either.

“The ultimate reason we do it is quality,” Jussiaume said.

An easy I-5 destination

Few wine destinations in the Pacific Northwest are easier to access than Del Rio Vineyards. The tasting room is open daily at 11 a.m., and year-round – unusual in the Rogue Valley. And while it’s a mere stone’s throw from Interstate 5, anyone who lives on the West Coast will scratch their head at the south-facing aspect of this bucolic vineyard on the north side of I-5.

“It’s confusing here,” Rob Wallace said. “This is the only place on the planet where I-5 goes east and west. I’ve been here 15 years, but growing up in California and driving I-5, it’s hard to get that out of your head.”

In less than a minute, folks can pull off, step into the historic tasting room and sample Jussiaume’s lineup, including his Rhône-inspired, food-friendly Grenache dry rosé that’s skyrocketed from 100 cases to 1,400 cases in less than five years. There’s also the off-dry Rosé Jolee, a Cabernet Franc-based pink that’s fun with a bit of spritz.

Among the new wine-country attractions in this part of Oregon is “Zip/Dip/Sip,” a trio of activities organized by Rogue Valley ZipLine Adventure.

“The customers come here in the morning and get picked up,” Wallace said. “Then they do a rafting trip, a zip line and then they come back here and have wine at the end of the day.”

And before they leave for home, the Del Rio team hopes wine lovers will pick two bouquets of flowers.