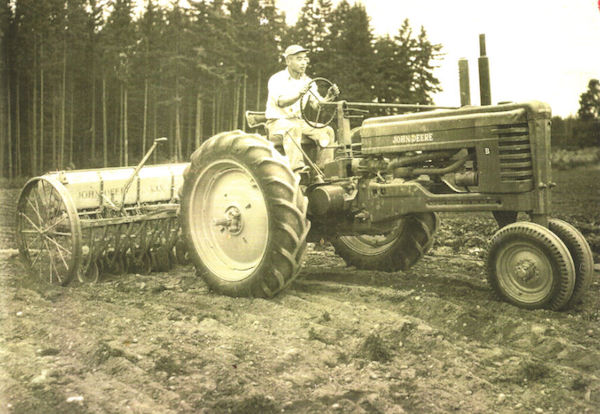 Akio Suyematsu rides his tractor on his Bainbridge Island farm in the 1960s. He was interned during World War II but returned to the island after the war and played a role in the Washington wine industry. (Photo courtesy of the Educulture Project)

BAINBRIDGE ISLAND, Wash. – One of the darker sides of U.S. history was the internment of American citizens of Japanese descent during World War II. One of those locked away ended up having a role in the development of the Washington wine industry.

We recently caught up with Mike Lempriere, owner and winemaker for tiny Perennial Vintners on this island that is a 30-minute ferry ride from downtown Seattle. Lempriere is a historian of sorts who often tells the story of Akio Suyematsu, a farmer who returned to his island farm after World War II.

It’s a story about fear, loss and redemption.

Growing up on Bainbridge Island 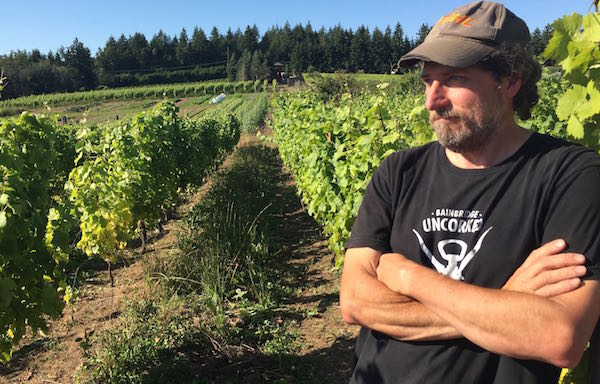 Mike Lempriere, owner and winemaker for Perennial Vintners, stands amid vines on the old Suyematsu farm on Bainbridge Island. Lempriere keeps the story of Akio Suyematsu alive by telling it to tasting room visitors. (Photo by Andy Perdue/Great Northwest Wine)

Japanese began arriving on Bainbridge Island in the second half of the 19th century. Akio’s parents moved to the island in the early 20th century and soon began a family. Back then, Bainbridge was an isolated island that did not yet have the Agate Passage bridge that now links it to the rest of the Kitsap Peninsula.

Akio was born Oct. 30, 1921, on the island and attended school there. He said the Pledge of Allegiance every day. When he was 7 years old, his parents purchased a farm in his name. According to the Bainbridge Review newspaper, his parents weren’t allowed to own property because they were born in Japan. But Akio was born in the United States, so he was exempt from the Japanese Exclusion Act.

Then came the bombing of Pearl Harbor on Dec. 7, 1941, pulling the United States into World War II. Bainbridge was close to a number of facilities related to the military, including the Puget Sound Naval Shipyard in Bremerton and Boeing in Seattle.

“Here in America, we went a little crazy and decided to lock up the Japanese – for better or for worse,” Lempriere told Great Northwest Wine. “There’s all sorts of things you can look back on in history and try to decide for yourself whether it was right or not.”

Lempriere, who has become something of an expert on the World War II internment camps, explained that those of Japanese descent were banned from being within 200 miles of the Washington coastline.

“We only locked up the West Coast,” he said. 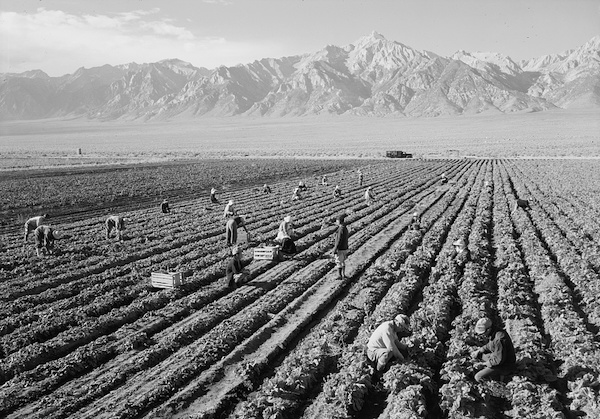 Japanese-Americans work the fields at the Manzanar internment camp in Southern California. Akio Suyematsu and his family were sent to this camp during World War II. (Photo by Ansel Adams/courtesy of the National Archive)

In March 1942, more than 200 residents of Bainbridge Island – all of Japanese descent – were ordered to move out of the 200-mile zone. They were given six days to do that. Lempriere said one family moved to Moses Lake, which was outside the zone.

On March 30, soldiers equipped with rifles and bayonets rounded up the rest and put them on a boat to Seattle. They were marched from the Colman Dock to the King Street train station and sent to Southern California. When they arrived at the northern end of Death Valley, the Manzanar internment camp was not yet completed, so they lived in squalor until buildings were erected and services were provided.

The Japanese-Americans of Bainbridge Island was the first to be interned in the United States.

A few weeks later, soldiers rounded up more Japanese-Americans throughout Western Washington and housed them for four months in horse stables at the Puyallup fairgrounds while the Minidoka internment camp was being built near Twin Falls, Idaho.

In all, more than 110,000 people of Japanese descent were interned during World War II. When the war ended, the Japanese-Americans were released.

“Each adult was given $25 to get home,” Lempriere said. “Many of them had no homes to come back to.”

Akio was 23 when he was released. He signed a loyalty oath and joined the U.S. military to fight for the country that had imprisoned him and his family for the previous four years. He ended up being stationed in Germany as a military police officer.

When Akio returned to Bainbridge Island in 1947, his parents’ farm was still in his name, and he and his family began the hard work of rebuilding. Ultimately, the fruit they grew there – primarily strawberries and raspberries – became regionally famous. 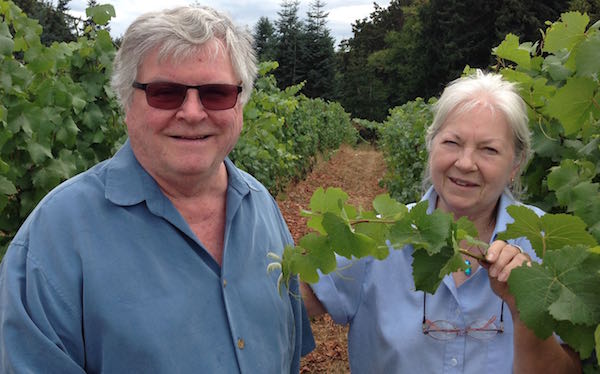 Gerard and JoAnn Bentryn believed they could grow wine grapes on Bainbridge Island. They were successful for more than three decades, and they retired in 2009. (Photo by Andy Perdue/Great Northwest Wine)

In the 1970s, the modern Washington wine industry was in its infancy. Maybe a dozen wineries were in operation, and that’s when Gerard and JoAnn Bentryn launched Bainbridge Island Vineyards & Winery.

The Bentryns were not interested in buying grapes from the warm Columbia Valley, a region east of the Cascade Mountains that was just beginning to show promise as a wine region. Instead, they were sure they could grow grapes on Bainbridge Island.

This meant bringing in European wine grapes better suited for the mild conditions found in Western Washington, including Pinot Noir, Pinot Gris, Müller-Thurgau and Madeleine Angevine. Purportedly, the Bentryns were among the first to plant and make wine from Siegerrebe, a cool-climate German variety.

The Bentryns purchased part of Akio’s family farm to plant wine grapes and also purchased his fruit to make their strawberry and raspberry wines.

Ultimately, the Bentryns proved wine grapes could successfully be grown here, and they were instrumental in the creation of the Puget Sound American Viticultural Area in 1995.

In 2009, the Bentryns retired, and their employees purchased the winery. Today, Betsey Wittick is the winemaker – and she still crafts a raspberry wine from island berries. Through the years she has spent working and living on the farm, she got to know Akio well as he worked his farm until his death in 2012 at the age of 90. 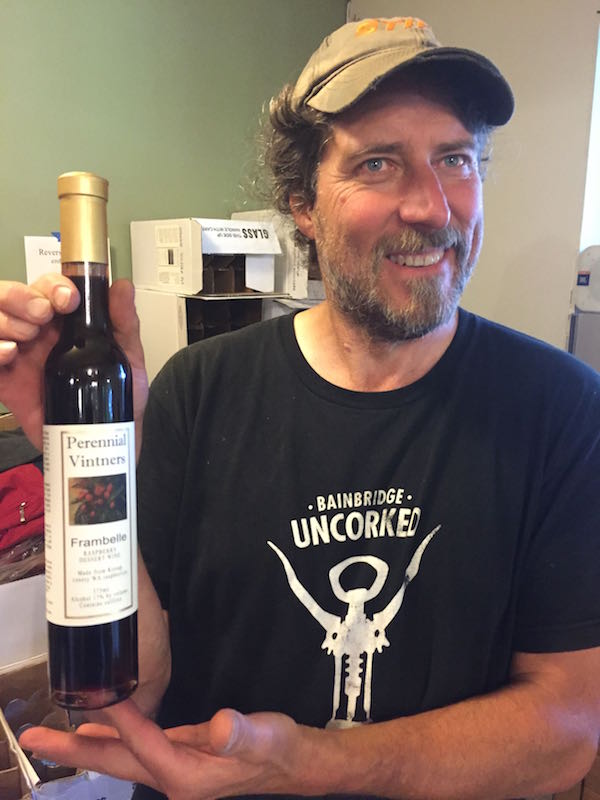 Lempriere became interested in wine in the 1980s, when he was working in high-tech. He created what may well be the first website dedicated to Washington wine. Called “MikeL’s WA Winery Guide,” it is a deep look at the state of the Washington wine industry prior to 2000. He and his then-wife visited wineries whenever they could, taking photos, tasting wine and interviewing winemakers.

Today, the site seems archaic in design. That’s because Lempriere has barely touched it since 2000 – not coincidentally when his son was born. MikeL’s WA Winery Guide remains an invaluable source of information and history on the modern Washington wine industry.

Lempriere launched Perennial Vintners in 2004. He uses grapes he grows on the land (including some of Akio’s original farm that Lempriere leases), as well as fruit he purchases from Eastern Washington vineyards. His pride and joy is a grape called Melon de Bourgogne, which he planted in 2004. He believes it is the only commercial Melon grown in Washington.

One of his offerings is a dessert wine called Frambelle that uses raspberries from Akio’s farm. Today, one of Akio’s longtime employees runs the farm – just as he did for more than 60 years. Akio’s farm is owned by the city of Bainbridge Island, which purchases properties when farmers retire and keeps them as farms to preserve the rural character of the island.

“It has been stripped of development rights,” Lempriere said happily. “It can never be used for anything except farming.”