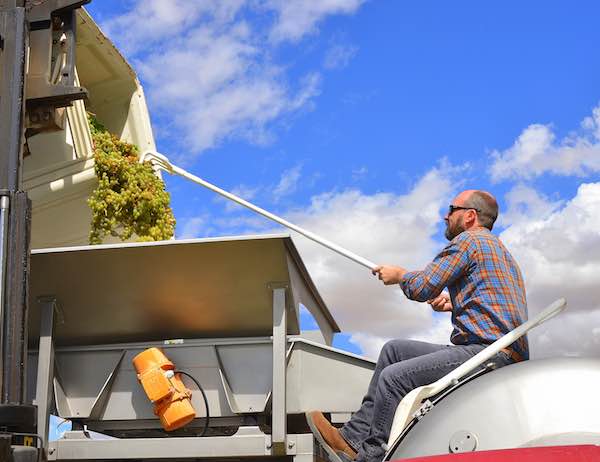 WALLA WALLA, Wash. – The Walla Walla Valley wine grape harvest is off to a steady start and is expected to burst into a full-blown frenzy in the next week or so.

Although many growers expected an early harvest this year after temperatures soared early in the growing season, moderate temperatures during July and August allowed the grapes to ripen at a more leisurely pace. The result is that although this year’s harvest is a few days earlier than the historical average, it’s not as early as it was the past two years, when temperatures were more extreme.

At Gramercy Cellars, winemaker Brandon Moss is happy with the pace of crush.

“Harvest is going really well,” he said cheerfully. “We’ve brought in a little bit of Cinsault, Grenache and Syrah for our rosé. We pick for that on the earlier side. We’ve been solidly picking for three to four weeks now. We pull fruit from a 1983 block at Red Willow Vineyard in the Yakima Valley, from a 2006 block at Marcoux right next door and from Olsen Vineyards at the east end of the Yakima Valley. From the Walla Walla area we get fruit from Les Collines in the foothills of the Blue Mountains and from SJR Vineyard in the Rocks District.”

Gramercy plans to bring in 200 tons of fruit this season and is already about halfway there. 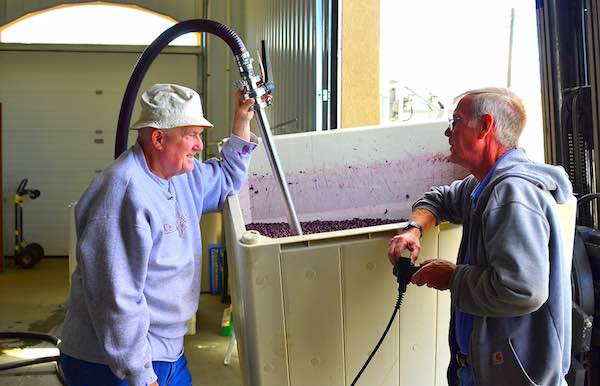 Doug Simmons, right, is the owner and winemaker for Eleganté Cellars in Walla Walla. He is helped by his brother-in-law Les Johnson. (Photo by Abra Bennett/Great Northwest Wine)

The Gramercy style means, “We try to bring in our Syrah at 22-23 Brix, which kind of puts us on the earlier side there, as well,” Moss said. “We feel like if Syrah tastes ripe in the vineyard, you’ve already gone too far with it. We pick for acid and freshness in the grapes and we’re not looking for those ripe flavors in the vineyard, which usually develop around 25-26 Brix, and that’s not the style we want to make. When you pick at those Brix, you tend to make a jammy, almost stewed fruit style of Syrah, whereas ours is more of a fresh blackberry or black currant style.”

At Eleganté Cellars, owner/winemaker Doug Simmons chose a small batch of Tempranillo from Les Collines as his first pressing this year. A small family operation, he works with the assistance of brother-in-law Les Johnson and friend Scott Henderson, hoping to get four barrels of Tempranillo.

Although it’s still a bit early for red wine grapes, he said, “We picked this a little less ripe, at 21.2 Brix. Last year, I felt that our Tempranillo was a bit too ripe, but this year it should be just right.”

At Buty Winery, winemaker Chris Dowsett spoke with Great Northwest Wine while pressing 2 tons of Muscadelle – the rare third allowable white grape in Bordeaux, along with Sauvignon Blanc and Sémillon. Harvest intern Alex Ponnaz sampled the grapes and exclaimed, “This Muscadelle is the most delicious grape I have ever tasted. It’s unbelievable.”

The Muscadelle and Sauvignon Blanc are from Lonesome Spring Ranch in the eastern Yakima Valley. The Sémillon comes from Rosebud Vineyards on the Wahluke Slope and from Boushey Vineyard north of Grandview in the Yakima Valley. Dowsett combines the Sauvignon Blanc from those two sources together to make a white Bordeaux blend rarely found in Washington.

Vintage starts hot, then cools off 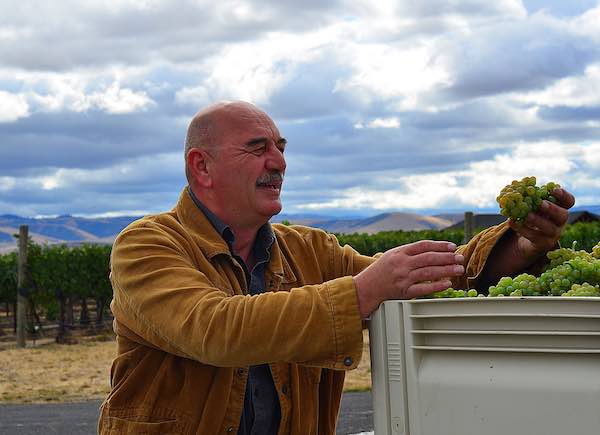 Dowsett, who has earned a reputation for producing some of the state’s most coveted white wines, agrees about the weather.

“This year was really hot right at the beginning, then things slowed down nicely,” he said. “It’s been a nice mix that gave us a little time where things were ripening really fast and then they came on and started developing flavors at some lower sugars.”

Muscadelle is a finicky grape under the best of circumstances, he said.

“This grape really has a lot of issues where sometimes the clusters will be really long but have only a few grapes on them. This year we have a really loose set, but with big berries, and the clusters have really filled themselves out.”

Sorin Dumitru, owner and winemaker at Bontzu Cellars picked 3.5 tons of Viognier from Francisca’s Vineyard in Walla Walla. Bontzu’s first release was in 2015 and this is the first year Dumitru has used Francisca’s fruit.

“They really care about what they are doing,” he said. “They’re part of Vinea (an organization with 40 vineyards and 22 wineries whose goal is to establish Walla Walla as a leader in sustainable viticulture), they practice sustainable farming, trying to preserve nature, the health of the soil, the health of the vines, and trying to get better grapes every year.”

Dumitru prefers to make single-vineyard/single-varietal wines, and all of Bontzu’s grapes are from the Walla Walla Valley – with the exception of a little Merlot from Stillwater Creek in the Frenchman Hills near the Columbia Basin town of Royal City.

“The vines look very healthy, and the grapes are tasting delicious,” he said. “We’re lucky to have this weather. It’s been cooler the past couple of weeks, and that has slowed down the growth after that heat wave. Our Pinot Gris harvest from Breezy Slope Vineyard, which is at a high elevation at the base of the Blues, is actually five days earlier than last year.”

Dumitru said he expects to start bringing in Syrah from the Rocks District of Milton-Freewater and Malbec from Sunny View Vineyard, as well as Pinot Noir from Breezy Slope.