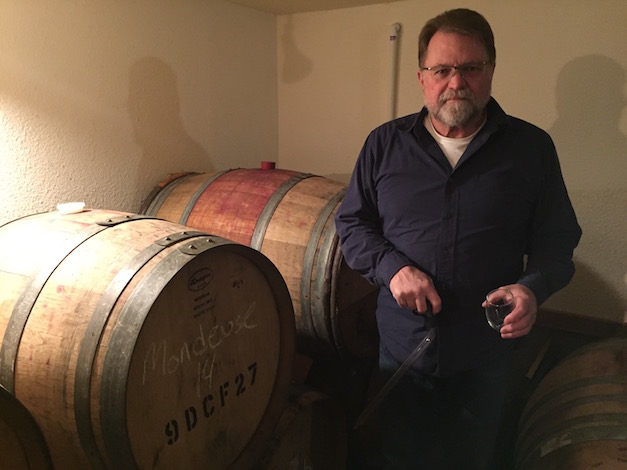 Joe Ginet, owner/winemaker of Plaisance Ranch in Southern Oregon’s Applegate Valley, has been a trailblazer in the United States with Mondeusé, an obscure red Rhône variety native to the Savoie region in eastern France. (Photo by Eric Degerman/Great Northwest Wine)

Besides, it was in his blood. And his family tree brought him an obscure red grape variety from the Rhône Valley to work with – Mondeusé.

“In 1998, some cousins of mine came from France, and I was whining to them about how I hated the dairy business,” Ginet said. “I had wanted to get into the wine business, and they are pépinières in France, which are grapevine nurserymen. They are not really winemakers, but they have a lot of vineyards and do about 3 million grafts a year.”

Ginet, a third-generation farmer who bought his first Applegate Valley ranch in 1979, was accustomed to hard work and was willing to learn.

His grandfather, Joseph, served in the French military and moved from the French Alps to the United States in 1890. Eight years later, he put down roots near Jacksonville, Ore. Leading up to Prohibition, Ginet – pronounced GIN-ay – established a vineyard with suitcase cuttings from France and became a winemaker.

Seven decades would span the time from when Joseph died in 1928 to when a grandson he never knew picked up the family’s heritage with wine.

“My cousins provide grape vines for the world, and they said, ‘Well, you should become a pépinière because that’s your heritage and we know how to teach you how to do that,” Ginet said.

His training covered six years, and those cousins from the Savoie region spent six months with him each year.

“They helped us plant the vineyards and taught us the grafting business,” Ginet said. “They actually invested money to get us going with the nursery.”

Nearly two decades later, what used to be his dairy welding shop is a commercial kitchen. The milk tank room serves as his tasting room. A barrel room was a milking parlor.

“We’ve just evolved every bit of the facility into something we could use for the wine business,” he said.

Earlier this year, we visited with Ginet inside that erstwhile welding shop at Plaisance Ranch near Greyback Mountain. Here’s the interview: 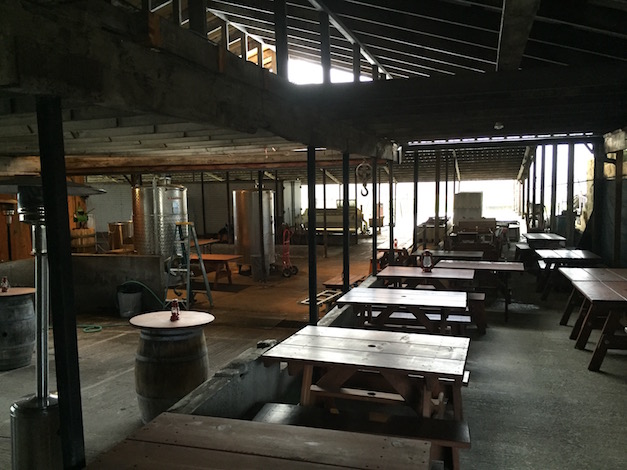 His grandfather named his 500-acre estate Plaisance Orchards, using the French word for “pleasure” – PLAY-zonce. Ginet’s transformation of his own 310-acre ranch was tedious and financially painful for an Oregon nursery providing budwood. At the beginning, Ginet got started by generating 50,000 grafts a year.

A turning point in the early history of Plaisance Viticulture operation was the expansion of King Estate in Eugene, which began in 1991 with a commitment to certified organic vines. Some of its 465 acres of vineyard received those starts from Ginet.

“King Estate was my first big customer because they bought all the rootstock we could produce – about 150,000 rootstock cuttings a year from us,” Ginet said.

Along the way, Ginet began to make small lots of his own wines from the nursery vines his cousins helped him establish.

“In 2004, we could start to see the light at the end of the tunnel, so we sold the milk cows and started the organic beef herd,” Ginet said. “In 2006, we were a commercial winery. We still sell plants, but right now we sell a lot of material to the California nurseries because we don’t have red blotch – yet.”

At this point, he’s producing about 2,000 cases of wine each year and selling 60 head of cattle to a waiting list of restaurants and consumers. More importantly, there’s no more milking. 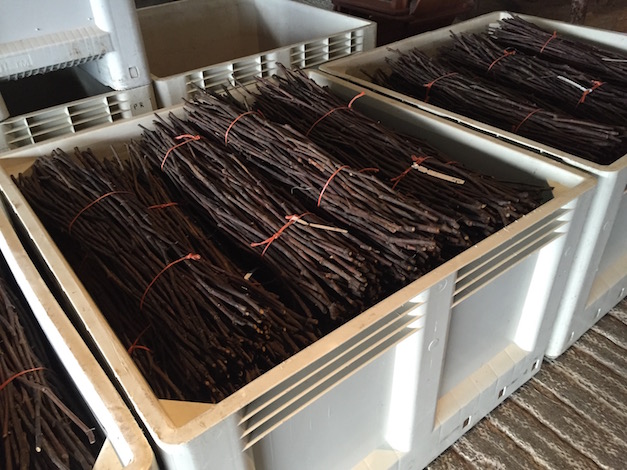 Joe Ginet developed his Plaisance Viticulture business with the guidance of family from the Savoie region of France. He began the business in 1998, which provides Oregon-certified plant material, offering grafted and own-rooted vine options. (Photo by Eric Degerman/Great Northwest Wine)

Plaisance Ranch, with its history as Williams Valley Dairy and ongoing nursery business, offers a fascinating wine touring experience. His Papa Joe’s Private Stash Tempranillo, at 600 cases, is one of his mainstream grape varieties.

And among the 18 styles of wine Ginet makes, he offers virtually every wine lover an opportunity to try something they’ve never tasted before.

“I ended up with 42 selections of grapes in my vineyard, so I have a lot to choose from, but the major red grape from Savoie, France, is a grape called Mondeusé,” Ginet said. “So in 1998, when I was in France, I brought sticks back to Missouri State University and they got through quarantine. 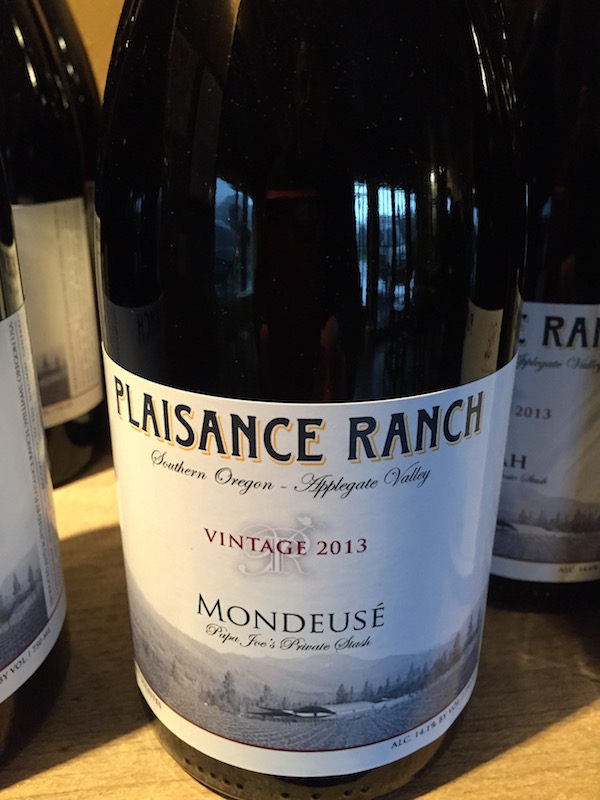 Mondeusé Noire is a grape native to the French Alps region of Savoie, and Oregon winemaker Joe Ginet sent cuttings from a relative’s vineyard to Missouri State University, which passed the material through its quarantine program. (Photo by Eric Degerman/Great Northwest Wine).

“In 2001, they cut up the sticks and sent them to me, so I had to propagate plants with those, and then in three years I could cut more sticks and propagate more plants, and so on,” he said. “It was about a 15-year project to get wine from Mondeusé.”

Success hasn’t been swift, yet 2016 has been a marvelous calendar year for wine competitions and recognition for Ginet.

In January, the Plaisance Ranch 2013 Carménère was selected as a Great Northwest Wine of the Week. In March, the Plaisance Ranch 2013 Syrah won a gold medal at the 2016 Cascadia Wine Competition. Five months later, that same Syrah earned best red honors at the Oregon Wine Competition. The judging also lauded his 2013 Carménère with an unanimous double gold and his prized 2013 Mondeusé picked up a gold medal.

“So I guess it’s all worth it,” Ginet said of the Mondeusé. “It is my favorite wine to drink. It’s very interesting, really unique.”

Research has pegged Mondeusé Noire as related to Mondeusé Blanche, viewed as the mother to Syrah, while Dureza is considered the father of Syrah.

“Most people have never heard of it, so they want to taste it,” he added. “If it’s any good, well, then they buy it. People like something new and unique. I call it a big, bold, spicy Pinot (Noir). If you taste it in France, they pick it earlier because they like less alcohol.”

Each year, Ginet ships a case of Mondeusé to his beloved pépinières.

“I make it a lot bigger, and they like it big, too, they’ve found out,” Ginet said with a chuckle. 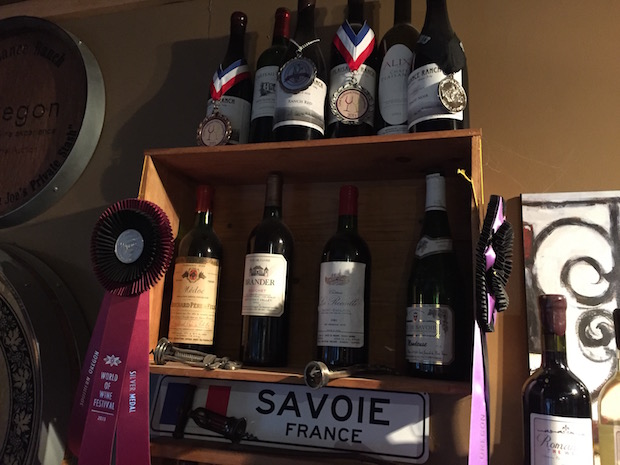 Applegate Valley grower/winemaker/rancher Joe Ginet earned the title for best red of the 2016 Oregon Wine Competition with his Plaisance Ranch 2013 Syrah. Plaisance Ranch also earned a double gold for its 2013 Carménère and a gold medal for the 2013 Mondeusé. (Photo by Eric Degerman/Great Northwest Wine).

Ginet credits much of his winemaking success to his mentor – Bryan Wilson of Foris Vineyards and Cuckoo’s Nest. If Ginet comes up with a question about how to handle his six clones of Tempranillo or when to go the rosé route with his Mourvèdre, he knows where to get the answer.

“He’s on speed-dial during the harvest season,” Ginet said. “I have a lot of respect for him. If you look at who the winemaker is for a lot of gold-medal wines, you are going to find Bryan Wilson there a lot of the time.”

Other grapes at Plaisance Vineyard that make it either to bottle or into blends include Cabernet Franc, Malbec, Merlot, Petite Sirah, Chardonnay, Viognier, Sauvignon Blanc, Aligoté and Pinot Gris – with a variety of clones for some.

And there is another…

“It’s called Persan, and it’s in quarantine at UC-Davis,” Ginet said. “It’s an ancient variety from Eastern France, and it’s got about another year in quarantine, but I’ll be excited to get that out.

“I tasted it the last time I was in France, and it reminded me a lot of Petite Sirah,” he added. “It’s going to be big and bold, and I can’t wait to see what we can do with it here.” 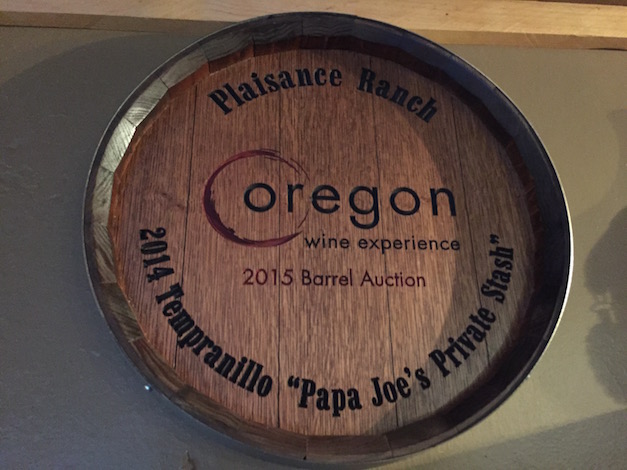 Joe Ginet remains an active participant in the Oregon Wine Experience, an fundraiser he and two other vintners launched in 2003 as the Southern Oregon World of Wine Celebration at Del Rio Vineyards. The Oregon Wine Experience now raises more than $500,000 a year for the Asante Children’s Miracle Network. (Photo by Eric Degerman/Great Northwest Wine)

Lee Mankin of Carpenter Hill Vineyard in Medford, Cal Schmidt of Schmidt Family Vineyards in Grants Pass and Ginet are credited with creating in 2003 what now is known as the Oregon Wine Experience, a month-long celebration and fundraiser in the Rogue Valley.

“We took out our credit cards and funded the event that first year,” Ginet said. “We were on the board of directors for the Southern Oregon Winegrowers Association, and we couldn’t get any money for our grapes. None of us had a winery then, and we wondered how we were going to increase the value for our grapes. We had to show the value to the outside world because there were only a handful of wineries back then, and they were beating us up pretty good on grape prices.”

For the first few years of the World of Wine event, Del Rio Vineyard owners Lee Traynham and Rob Wallace donated the use of their now-iconic gazebo near the Rogue River.

“We cooked all the food, and I think we had 400 people attend the first year,” Ginet said. “It went along well for a lot of years, and it got bigger than us.”

In 2014, regional healthcare provider Asante Health System began to manage that event as the annual fundraiser for its foundation. Last year, more than 2,100 attendees helped the Oregon Wine Experience raise more than $500,000, which led to the hiring of a child life specialist at Rogue Regional Medical Center in Medford.

“When Asante stepped up and offered to take it over, it was the perfect match,” Ginet said.

Its signature grand tasting and celebration is built around the results of the Oregon Wine Competition, a judging that features a number of Masters of Wine as panelists each year. It’s ironic, but no coincidence, that wines made by Ginet and Wilson dominated the 2016 results.

“We’ve had MWs, Master Sommeliers and some really high-powered educators from UC-Davis and Cornell,” Ginet said. “I’m very proud of it. And it’s been good to me, too. And I’ve noticed it’s the hardest event to get medals from. With those (judges), it’s tough to get a gold – which is good!”