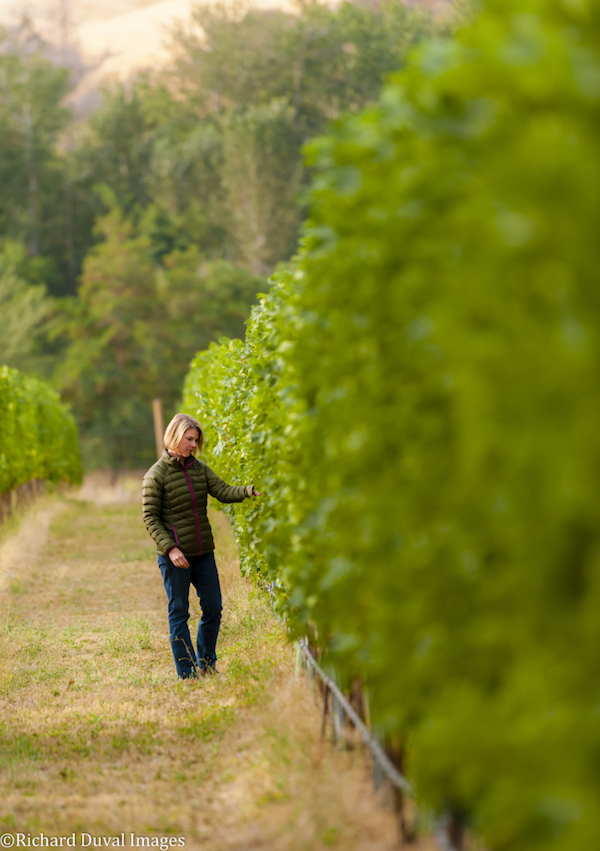 WALLA WALLA, Wash. – This is a tale of new beginnings and helping hands. It’s a tale of relying on your instincts and trusting those of the people around you. It’s the story of JJ and Kelly Menozzi, and their recently established Aluvé Winery.

Up in the sky, whether you’re flying in a fighter plane squadron as JJ did, or jockeying a big mid-air refueling plane, as Kelly did, you need to be in absolute control, all the while working in tight-knit harmony with the rest of your team. Practicing those skills for 23 years in the Air Force served the Menozzis in good stead when it came to starting up a winery. Calm, steady, comfortable with technology and science, good at cooperation, those are traits they have honed to perfection.

In 2010, several years before they retired from the Air Force, the Menozzis bought 10 acres of land above Mill Creek and planted 6,000 vines on 5 of those acres. Those vines are now in fifth leaf, the home they are building on the property is nearly complete, and building a small winery is next in line.

Their dream is to make Old World-style estate wines, to live among their vines, tend them daily and use minimal irrigation and sustainable viticultural practices. They hope to make wines that reveal a distinctive terroir; Mill Creek is a cooler, higher-elevation region where grapes ripen more slowly than in many parts of the Walla Walla Valley. They share this locale with acclaimed Walla Walla Vintners and neighboring vineyards such as Kenny Hill (Dunham Cellars), Yellow Bird (the Chan family) and Tokar. The first Aluvé wines have been made using some of this fruit, while the Menozzis wait for their estate vineyard to reach full production.

New to vineyard work, both are aware of the huge responsibility of caring for 6,000 vines, recognizing that this year’s pruning decisions will affect next year’s crop size. Describing herself as a “reluctant shoot thinner,” Kelly pulls weeds with abandon but hesitates over cutting the vines down to size. JJ follows her down the rows and removes any shoots and leaves she’s been too tender-hearted to pull. Tough-minded though he may be, he still talks to the vines as he works, encouraging and praising them. They have just harvested and pressed this year’s estate Chardonnay, and are delighted to see how their hard work has paid off. 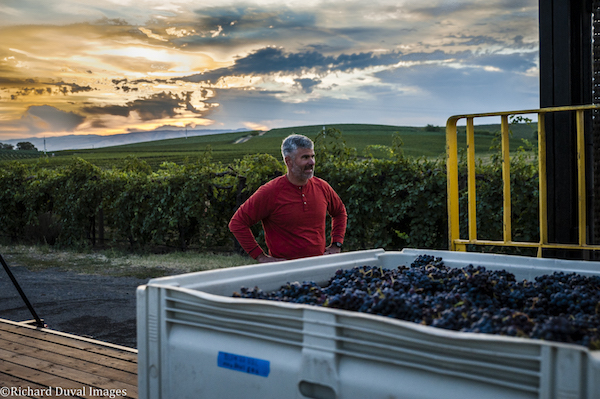 JJ Mennozi looks over Sangiovese grapes destined for rosé. This will be the first rosé for Aluvé Winery. (Photo by Richard Duval/Great Northwest Wine)

Last year they released their first wines, and their blend of Cabernet Sauvignon, Malbec, and Merlot, called Primo Volo – Italian for first flight – won gold medal and best of class at the 2016 Walla Walla Valley Wine Competition. Aluvé has also released a Cabernet Sauvignon and a Chardonnay, and will soon be releasing its first estate Chardonnay.

How have they accomplished all of this in just a single year of living on their land? That’s where the helping hands come in. To gain practical experience, Kelly worked on the crush team at Walla Walla Vintners for the 2014 harvest, JJ worked the 2015 harvest at Dunham Cellars. Both JJ and Kelly are full-time students in the Walla Walla Community College’s Enology and Viticulture program and worked on the 2015 crush team there.

Studying at the same time they’re making and selling wine, each practice enhances the other.

“I think going to school is really what we needed to be able to ask the second and third level questions. Especially in the vineyard, we got an understanding of the multi-year process of growing grapes, the viticulture classes were so valuable,” Kelly said. “And on the winemaking side, there’s so much art and science.”

And then, there’s Dunham Cellars.

“The Dunhams were the first people we met when we came to Walla Walla back in 2000, and they’ve been completely supportive of us ever since,” she said. “They’ve made sure that we got the best start that we possibly could. We couldn’t have started without them. We also used their partner, Appellation Management Group, and we couldn’t have done it without them from the time our vines were planted until we were able to retire and move here.”

The Menozzis still refer to themselves “apprentice vineyard managers” but hope to take over full management of their estate vineyard next year.

This year, they decided to make their first rosé. Out before dawn to collect their freshly picked Sangiovese from SeVein Vineyards near Milton-Freewater, Ore., the pair strapped the bins to their newly bought trailer and trucked it into town, where they would make their wine as a custom-crush client at Dunham.

As Kelly explains it: “We make all the picking decisions, we choose the yeast, we do the blending, but we use their equipment and their expertise if we have any questions.”

“It feels new and exciting,” says JJ, ”because I don’t know a ton about making rosé, but I’m confident that these guys will be able to shepherd us through. I’m hoping to make a rosé that’s just very slightly off-dry, very fruity and very characteristic of a Sangiovese, so with a lot of strawberry, peach and melon flavors, with good acidity, balanced with just a little bit of residual sugar, in a lower alcohol-style wine.”

This rosé pressing is full of firsts. Tyler Tennyson, the new head winemaker at Dunham, explains, “I’ve made rosé for the past four years, and this is their first time. Also, this is my first time having custom-crush clients, so I’ve been really appreciative, because I’m a graduate of the WWCC winemaking program that they’re now enrolled in, and for me it’s a lot of fun to be able to help them with the dream. At the end of the day, I want to help them make their wine, to make sure that the stylistic decisions are theirs. I’ll help guide them, but they need to be comfortable with the decisions.”

Kelly sees a lot of parallels between their former life in the Air Force and their new life as winemakers and viticulturists. “There’s a lot that translates from being a pilot into being a winemaker. In both of them there’s a certain way to do things that’s science-based, and then there’s the art of flying, the art of winemaking. In the Air Force we always talked about procedures and techniques. There are the procedures that you have to follow, and then there are the techniques that allow you to refine your skills, to be a better pilot, to be a better winemaker.”

Her view of the craft of winemaking is pragmatic: “Since wine is a living, breathing thing that changes, you don’t know how it’s going to age out in the bottle, how it’s going to change in the two years after we bottle it before we release it. So you can be a control freak up to a certain point and make really good, clean wine that you love, put it in the bottle, and then it’s up to nature to take it through its process, which I think is the beauty of wine.”

The Menozzis may be down to Earth these days, but they’re off to a flying start. And based on their record to date, it looks as if it won’t be long before Aluvé will be flying solo.