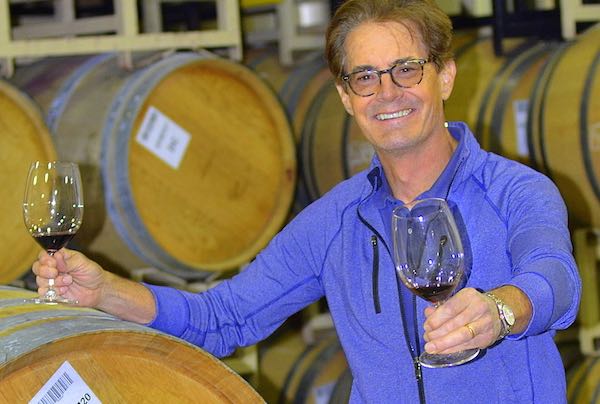 WALLA WALLA, Wash. – You may know Kyle MacLachlan as Portlandia’s mayor or as Dune’s Paul Atreides, or perhaps as Dale Cooper in Twin Peaks or as Trey MacDougal in Sex and the City.

Not your average bear 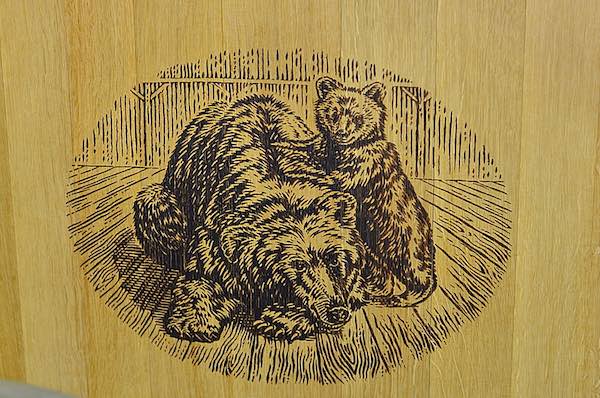 His flagship wine is called Pursued By Bear, and MacLachlan describes it like this. “It’s always been fairly consistent, with Cabernet Sauvignon as the dominant grape. My first and foremost love right now is Cabernet. I just love the Cabernet mouth feel. We originally blended in Syrah, but now I’m going with Merlot, and I plan to bring in some Cabernet Franc as well, just to see what it does.”

He also produces Baby Bear, a rich and powerful 100% Syrah developed at the time his son was born. Combined annual production for both wines is 600 cases. And this year for the first time, he made a rosé called Blushing Bear, which is a blend of Grenache, Cinsault and Mourvèdre.

Why all the bearishness? It hearkens back to A Winter’s Tale, in which the character Antigonus is directed to exit, pursued by a bear.

“I wanted a name that had some sort of acting reference,” MacLachlan says, “and pursued by a bear is both the most specific and most unusual stage direction in all of Shakespeare’s canon.” 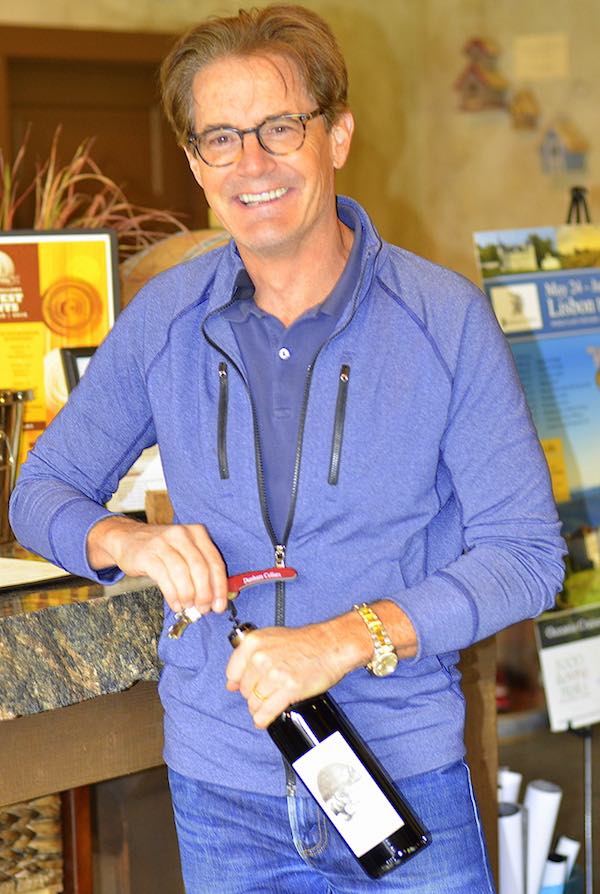 Actor Kyle MacLachlan opens a bottle of his Pursued by Bear, a brand he owns in Walla Walla. (Photo by Abra Bennett/Great Northwest Wine)

Although today MacLachan, 57, lives in New York with wife, Desiree Gruber, and their 8-year-old son Callum, he grew up in Yakima and still loves to return to his roots. He graduated from Eisenhower High School in 1977 and the University of Washington in 1982.

“Making wine here in Eastern Washington brings me back to where I grew up,” he said. “I’ve made a whole new set of relationships and friendships – it’s a different world here from the world of film and television. It’s something I like to share with Callum.

“He talks about ‘his wine,’ the Baby Bear, and that’s really cute,” he continued. “And we visit friends here who have access to the river. He can go swimming and fishing, and he gets to be a boy in the country. He’s got a fantastic life in New York, but this is more like the life I grew up with.”

An elegy to Eric Dunham 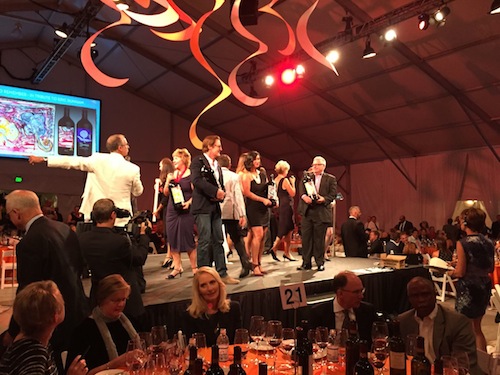 Kyle MacLachlan of Twin Peaks and Portlandia fame (center with jeans) holds a bottle of his Pursued By Bear during an auction item honoring the late Eric Dunham, his friend and co-winemaker in Walla Walla. (Photo by Great Northwest Wine)

MacLachlan revels his time in Walla Walla for the opportunity to breathe the clean air and participate in making the wines that bear his name. But he freely admits that he doesn’t make his wines single-handed. Rather they are crafted in collaboration with Dunham Cellars. In fact, he owes his start in the wine business to the Dunhams.

His interest in wine began in the early 1990s, and a few years later he began thinking about how he might become more involved in the wine world. Then he met Eric Dunham, founding winemaker of Dunham Cellars, who died two years ago.

As MacLachlan recalls, “It was right when I was looking for wine to serve at my wedding, and Eric and I really hit it off. And because he was out of the Syrah I liked, he directed me to Woodward Canyon, which I thought was really nice because it’s that kind of world out here in Walla Walla, where everyone supports everyone else. And that started my friendship with Eric. I’d come down here and hang out, and he was open to the idea of helping me get into the world of wine.”

And thus were the seeds of Pursued By Bear sown.

From stardom to nerdvana 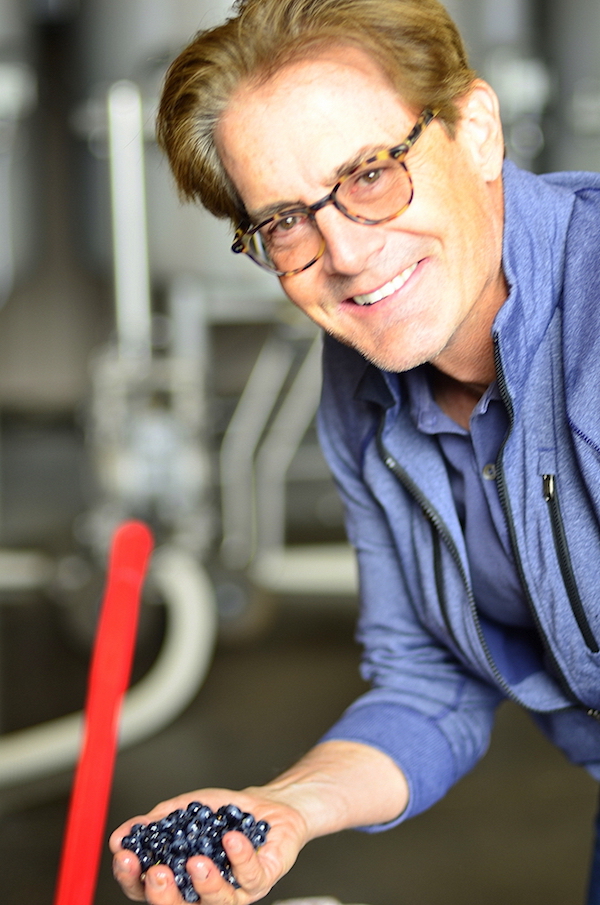 As Joanne Dunham, co-owner and founding member of the winery, remembers it: “He came in without knowing much, as we all did, but now he knows what kind of fruit he wants, what kind of barrels he wants, he’s talked to a lot of people, and he’s learned a lot here.”

It’s evident that MacLachlan has learned a lot. Although there may be celebrities whose names appear on wine labels primarily as a commercial project, MacLachlan clearly has a passion for both the process and the product.

In fact, he’s become something of a wine nerd.

He takes all of his fruit ultra-seriously, sourcing primarily from DuBrul Vineyard, as well as smaller amounts from Lewis and Klipsun vineyards. DuBrul, owned by Hugh and Kathy Shiels, sits on a steep south-facing basalt slope above the Yakima River in the Rattlesnake Hills.

MacLachlan is also seriously into oak. When he began thinking about making his own wine, his thoughts naturally turned to barrels. Mark Aubert, who was at the time the winemaker for Colgin Cellars, suggested high-end Taransaud barrels, which are made in Cognac, France, by a family that has been in the business since 1652.

Wine thief in hand for a barrel tasting of Klipsun Vineyard Cabernet, for a moment MacLachlan is thinking more about the barrel than the wine it contains.

Is he an oak geek?

And recently, just for the pleasure of gilding the lily, MacLachlan has begun embellishing the heads of his barrels with lovely bear-related artwork by Caroline Church, an acclaimed scraperboard artist near London.

Learning as he goes 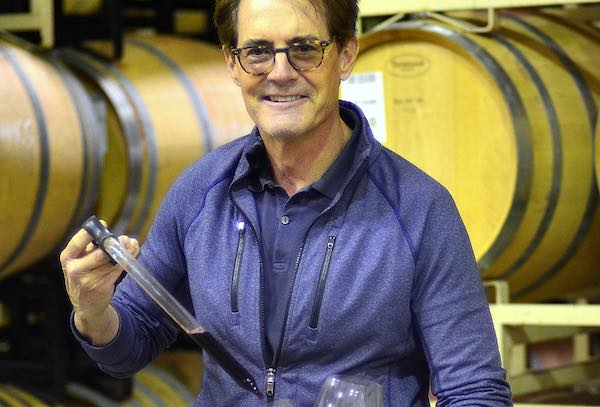 Although Pursued By Bear was founded in 2005, MacLachlan still views his wines as “a work in progress. I make what I like to drink. And hopefully my wine will keep improving because I’m curious, and I don’t feel like it’s a set deal, where the fruit comes from, what the exact blend is going to be. It’s a creative endeavor, and I enjoy learning about the process, there’s room for discovery.”

Opening a bottle of the 2012 Pursued By Bear, he pronounces it to have “beautiful structure, great fruit, silky tannins, stone fruit, blueberries and licorice. It’s luscious, rich and balanced, with a great finish, When Eric and I got started, we both agreed that we wanted to make wine to pair with food, so balance was really important, and this is a great food wine.”

If you happen to be able to put a Guinea hen with a morel and shallot cream sauce on your table, this would be just the wine to serve with it.

MacLachlan said he finds his life in wine to be a distinctly relaxing change from his life on the screen.

“It’s something that I have more control over than in my career, where I’m kind of at the mercy of work that comes to me,” he said. “Winemaking is something where I can actually make decisions that will affect the final product. Pursued By Bear may be just a blip on the wine scene, but it’s a very satisfying blip.”

Joanne Dunham adds, “Kyle brings an extra bit of spice and excitement into Dunham, and he’s brought in a lot of people, so we’ve gotten exposure that we wouldn’t have had otherwise. Plus, he’s a great guy. He’s very easy and enjoyable to have around.”

Although he’s brilliant at playing quirky characters, he comes across as a delightfully all-around nice guy from Yakima, with the added interest of having a face that’s deservedly well known in pretty much every household in the country.

But, he says a bit plaintively, “It’s quirky that I make wine, isn’t it?”